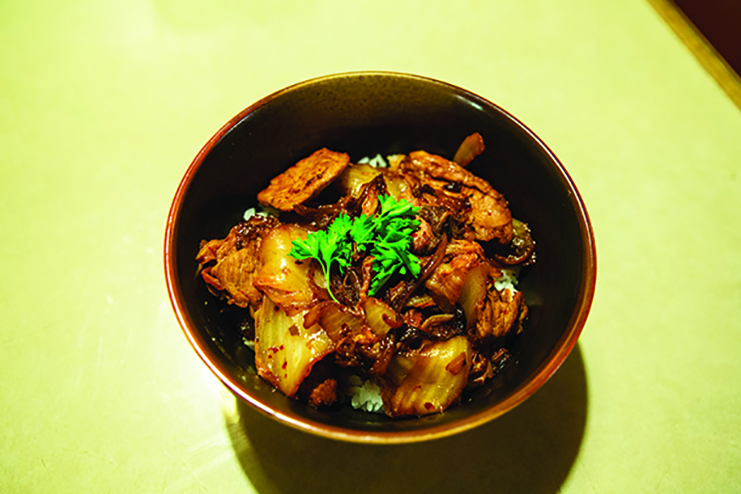 On a hot, smoky Wednesday evening, Czech electronica performer Lenkadu takes the stage at Bush Garden. “Have a one-on-one, let’s lose our phones,” she coos into the microphone. Beats play over the speakers, and a television at the front of the stage shows a video of her riding a model train through the Redwoods.

This is a different kind of performance than you usually see at Bush Garden, the legendary restaurant and karaoke bar in the Chinatown International District. Bush Garden, which opened in its current location in 1957, was the first restaurant to offer karaoke in the state – some even say the country.

Once a restaurant with room for 500 diners, Bush Garden was the picture of midcentury elegance and a gathering place for Seattle’s Japanese community. It was the spot where the powerful – senators and governors, movie stars and athletes – mingled and bargained.

Community leader “Uncle” Bob Santos, who passed away in 2016, was a regular at Bush Garden, crooning tunes in his Panama hat on Tuesday nights. He still holds court today. A cardboard cutout of Santos stands at stage right, joining singers in a silent duet.

With performances like Lenkadu’s, Karen Sakata, who co-owns Bush Garden with her husband Masaharu, wants to start expanding beyond karaoke to include more live music. Evoking Santos and Bush Garden’s legacy, she says, “Uncle Bob would stop and tell people the history of music in the International District. There used to be music up and down Jackson Street. He used to say, ‘This is the last one standing.’”

Live music is only one of the new features you’ll find at Bush Garden. You’ll now find pinball machines, arcade games and board games. There’s a new point-of-sale system, to make the restaurant run as efficiently as possible. Wifi is available so that people can work from the restaurant. Karaoke hosts will soon use a new computer system, ensuring that a wider range of songs is available.

And a full menu is back. Long ago, the second floor, where the private tatami rooms were located, was closed off. In 2016, the restaurant part of Bush Garden closed altogether, with only the bar remaining open.

On August 7, the restaurant side of the ground floor reopened. Chef Antonio Vallarta Noalsco, who’s worked at Japonessa, Fuji Sushi and How to Cook a Wolf, put together the new menu featuring creative new dishes along with updated takes on Bush Garden favorites like the garlic pork chop. The menu is available starting every day at 4:30 PM.

“Bush Garden has stood for community. We’re asking where we can grow from there in terms of keeping community as the center focus, gathering people together,” says Sarah Moriguchi, who is working with Sakata in updating Bush Garden. “Bush does a great job of bringing old and new and mixing them together… Let’s keep those traditions and keep the community, but how can we move that forward, keeping the same values but expanding in terms of getting more people through the door.”

Bush Garden symbolizes what many see as the challenges the Chinatown International District is facing as a whole – a disappearing community imprint in the face of development.

Developer Vibrant Cities bought the Bush Garden building in 2016. In 2017, the Seattle City Council passed an upzone of the neighborhood, prized already for its proximity to transportation hubs and the downtown corridor, making it even more attractive for development. The upzone exempts the historic district, but the district ends just one building away from Bush Garden.

Vibrant Cities has announced they’ll build a mixed-used development, called Jasmine, with businesses on the ground floor and residences above. They’ve pledged to carry “the Bush Garden spirit into a vibrant community,” according to their website, and CEO James Wong has said publicly that he’ll work to keep Bush Garden in the space. But he and Sakata have yet to have a deeper conversation about how to make that happen. Sakata knows that it has to “pencil out” and make financial sense for the developer and its investors.

For Sakata, it’s a question of values. “Change is going to happen. I’m not against change,” she says. “But not when it comes at the expense of losing your identity, losing history in the name of so-called progress.”

Existing as a backdrop to the debate is the changing identity of Bush Garden and Chinatown International District. When Bush Garden opened, it was only one of two Japanese restaurants in town. Due to redlining, the Asian community was concentrated into selected areas. Now you can get Japanese food everywhere. New immigrants settle in communities like Bellevue to the east or Kent to the south. Fewer are coming to live in Chinatown International District.

“All the changes in Seattle are sad, but it’s inevitable,” says Moriguchi. “It’s good to be a part of the change and help guide where we think it could go… We can shift it in a way to try to make everyone happy.”

And the vision for that change and the future of Bush Garden? “To tell the whole story of immigrants through the portal of Seattle, through music, through culture, to really make Seattle a place where diversity is valued,” says Sakata.

An hour after Lenkadu leaves the stage, karaoke favorites blare over the speakers once again: some country, a little Celine Dion and Britney Spears, and some Aretha Franklin to memorialize her recent passing.

Sakata and Moriguchi exchange hellos with all the regulars that pass by. Some come daily, others weekly, monthly or on special occasions. They are different ages and races – all have found a home at Bush Garden.

Alan, one of Bush Garden’s bartenders, is there almost every day, even on nights off. “I went fishing the other day with a Japanese guy,” he shares. “His parents and grandparents used to come to Bush Garden all the time.

“He told me, ‘If my parents and grandparents knew you worked there, they’d say that you should be really proud.’ That was really nice to hear.”

Remembering solidarity and resilience at rallies in 2021