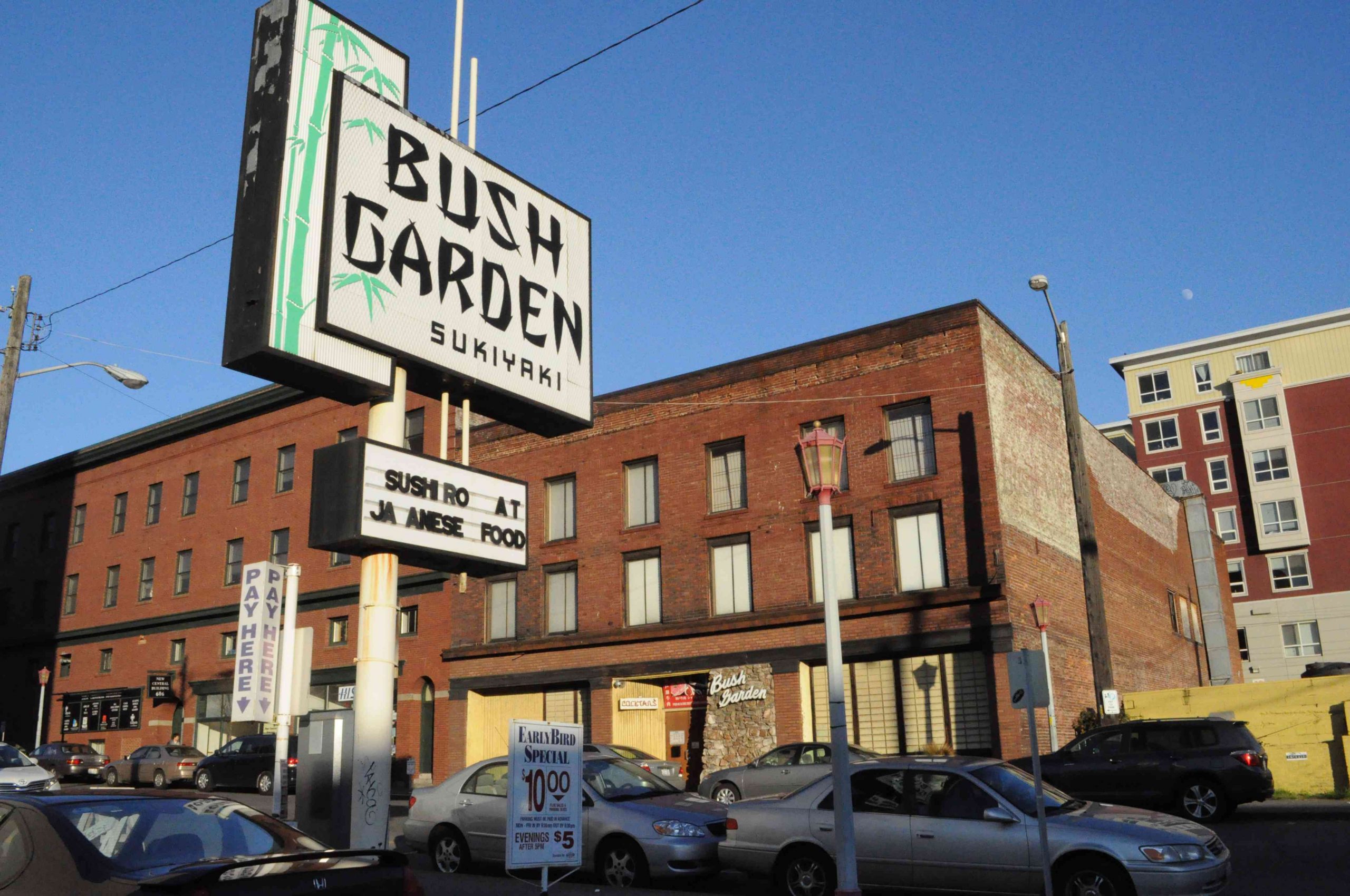 Bush Garden is the second oldest Japanese restaurant in Seattle and Washington state. The restaurant opened in 1957 in its current location, which was originally owned by Roy and Joan Seko. In 1996, the Sekos sold the business to Karen Akada Sakata and Masaharu Sakata, the current business owners. At its height, Bush Garden used to have five hostesses, four bartenders, 23 waitresses, and a photographer. Legendary baseball player Joe DiMaggio and actor Shirley MacLaine ate at Bush Garden.

Last January, the building that Bush Garden is located in was sold by George Liu and Assunta Ng to Solterra, a real estate development company, for $5 million, according to a King County Assessor’s office report. Although the restaurant side closed on October 29, the bar and karaoke lounge will remain open for at least another year while the redevelopment plans are being finalized.

Bush Garden owner Karen Akada Sakata said: “As development plans move forward, I am hopeful to find another space in the International District to continue the long history of Bush Garden being a community gathering place and home to so many. I am grateful for the support shown to the Bush Garden family for all of these years.”

Bush Garden was the place where people go after services, fundraisers, to let off steam, or gossip. It was the home base for the generations who share those experiences. Sakata said, “It’s hard to sum it up and I loved that it was that place.”

Bush Garden has been a staple in the community, acting as a venue for people from all walks of life and a meeting place for community leaders and activists.

Bill Tashima, a former president of the Seattle Chapter of the Japanese American Citizens League (JACL) and a long-time board member of Nikkei Concerns, shared memories of going to Bush Garden with activists like Tatsuo Nakata, an emerging leader and activist in the community who died tragically in a car accident in 2006. Years earlier, at the age of 24, Nakata had been the youngest Seattle JACL president ever elected.

“Tatsuo Nakata invited me to meet him [at Bush Garden] back in 2002,” Tashima said. “Five martinis later, I agreed to be his 2003 Seattle JACL President-elect.”

Tashima also described how he and the late community leader Shigeko Uno always went for one drink after Nikkei Concerns board meetings. “One meeting was on [Shigeko’s] 90th birthday. Shigeko asked Dennis Yamashita and me to sing ‘Stardust’ to her,” Tashima said. “The one and only time I did karaoke at the Bush. Luckily, Karen [Akada Sakata] joined us and salvaged the song.”

When community leader “Uncle” Bob Santos passed away in August, the community flocked to Bush Garden to remember him. Santos would regularly sing songs like “My Way” and “Just a Gigolo” during karaoke at Bush Garden on Tuesday nights.

For many, like activist Kristina Logsdon, Bush Garden is where deep, personal connections were made. “[Bush Garden is] where I met Voltaire [her husband] and where our relationship started. So, it holds a very special place in my heart,” Logsdon said.

Bush Garden is actively seeking out Bush Garden stories from community members as well as volunteers to help with the transition. Interested individuals can participate by going to: goo.gl/bo6nU6 or by emailing [email protected]

The next International Special Review District Board will be held on November 8 at 4:30 p.m. at the Bush Asia Hotel, 409 Maynard Avenue South (in the IDEA Space meeting room), unless otherwise noted. Board meetings are open to the public.