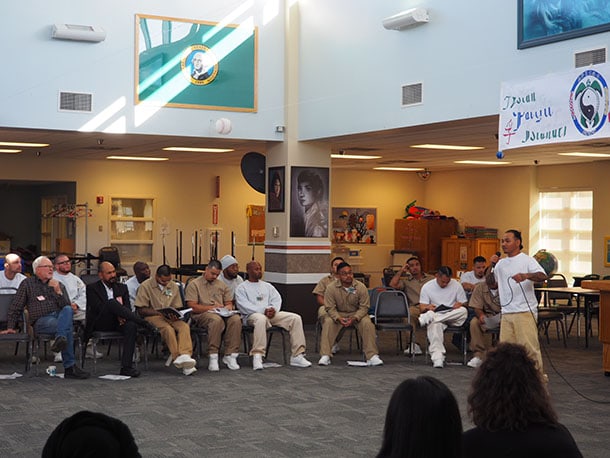 “Our goal is to change the narrative, change the perception of the public when they think of immigrants or when they think of deportation to where they not only think of the Hispanic community as the forefront, we want to shift that perspective,” said Francisco Sao, vice president of Asian Pacific Islander Cultural Awareness Group (APICAG) at the inaugural APICAG Deportation Town Hall held at Stafford Creek Corrections Facility in Grays Harbor County.

“There’s other communities that are really affected by this too, that are really trying to fight for their lives. So when that topic comes up, people can actually envision the Southeast (SE) Asian being impacted, even the African community, the Russian community,” he said.

APICAG, an inmate led cultural group established in the summer of 2018, works to help educate and prepare incarcerated community members for reentry into society. It does this by partnering with Stafford Creek Corrections administration and collaborating with other cultural groups like Formerly Incarcerated Groups Healing Together (FIGHT), Pacific Rim Solidarity Network (PARISOL), Asian Counseling and Referral Service (ACRS), as well as larger entities like the Seattle Public Library.

This event took place on Tuesday, October 16, 2018, with a full day of programming that included storytelling, workshops and resource sharing around common court procedures such as filing motions and briefs, available community resources, and what to do and to expect once you arrive at Northwest Detention Center under ICE custody.

At the opening of the event, the audience was treated to Haka, a traditional Māori dance performance, performed by APICAG members.

Stafford Creek Correctional program manager Gary Bohon opened the program. He underscored the need for resources pertaining to deportation, highlighting the magnitude of incarceration to deportation issue faced by many of the inmates.

He told the inmates, “This event is here to help you.”

Many of the inmates, especially Khmer Americans, go straight into the hands of ICE custody and are detained at Northwest Detention Center in Tacoma. They have a hold placed on them called an ICE detainer (meaning that ICE picks them up directly from prison).

Due to immigration laws passed in 1996, many offenses were deemed deportable for non-citizens. One of the most vulnerable communities affected by these laws are incarcerated Khmer Americans.

In 2002, Cambodia and the United States agreed on a Memorandum of Understanding that set deportations in motion for Khmer Americans. Since 2002 there have been over 500 Khmer Americans deported and another 1,500 have final orders of removal to be deported to Cambodia.

Stressing that the event’s purpose was strictly one of resource access, Bohon emphasized that the gathering should not include politics; therefore Stafford Creek administration either edited speeches or did not allow speakers whose writings were deemed too political to take the stage.

“A lot of the staff here are conservatives, they’re not used to a progressive thing like this,” said Sao about the restrictions. According to Grays Harbor County Auditor exit polls from the 2016 elections, a majority of Grays County voters voted for Donald Trump and the Republican candidate for the Washington state governorship.

“[Politics] is not our purpose of this,” said Sao. “We’re trying to raise awareness and educate the brothers that are affected.”

“What we didn’t properly do was educate the staff when we posted up the flyers,” added Billie Gumabon, president of APICAG.

Despite the turbulence in landing an event like this, Sao sees it as an opportunity to build, learn and spread awareness with Stafford Creek administration. “I think it’s really on us to be able to convey that message and have that communication with administration.”

“One of the things that we did early on was a [Stafford Creek] staff summit where we were able to share with the staff who we are, what we are,” said Cyril Walrond, President of the Black Prisoners Caucus (BPC), about some strategies his group undertook in its early days.

The BPC was founded in 1972 and was formally established at Stafford Creek Corrections Facility in 2016. The BPC advocates for incarcerated black men and women through culturally responsive education and workshops in collaboration with outside community groups.

“The struggles that we see with the APICAG, as they’re growing and establishing themselves within this institution, are the same struggles we had just two years ago as we were trying to integrate ourselves into the fabric of this incarcerated community,” Walrond said.

Walrond added how an event like this can bring together the incarcerated community of Stafford Creek. “This forum has really created an atmosphere in a place where we hear brothers sharing their stories and their struggles, brothers talk about the Khmer Rouge and their experience growing up through those different experiences, those situations, right?”

Walrond feels that the broader communities, especially the ones that rely on the prison system for their economy, can learn and understand more about the people they see daily here.

“I believe it humanizes this experience in so many ways that has been so politicized, but it hasn’t been humanized, where now we can see this narrative, we can see the story came alive, and it’s not so far removed as we think it is. Like this is right next door to us…These are our neighbors, these are our brothers, these are children, these are our parents. And so it is much bigger than any one of us.”

Inmates are allowed by Washington Department of Corrections administration to form cultural groups like BPC and APICAG if there are community groups from outside the prison that provide sponsorship.

“We come together and we’re able to have common dialogue, even an uncommon dialogue,” said Sao. “It empowers us… thanks to the BPC brothers it’s a little bit lighter on us because they already went through most of the hard work.”

Because of the lack of representation faced by incarcerated community members, groups like APICAG and BPC see collaboration as an integral part of advocacy work within the DOC system and with these outside sponsor organizations.

A major part of the town hall was the “Lunch Open Table Discussions.” Here, inmates and community sponsors discussed how the state of deportation came to be, how it affects everyone, and what individuals can do to help.

“Our first step is to really listen, understand, and hear the stories that the voices of the individuals who are directly impacted by this issue,” said Gumabon. “We have to properly educate ourselves about the issue and the effects of it. Then we as a collective, as a community, we figure out what the solution is.”

As part of its efforts to reduce recidivism, the Washington Department of Corrections offers employment and the opportunity to gain vocational training through it’s Corrections Industries (CI) program.

A 2015 Washington State University study found that trade skills and access to employment drastically reduced the chance of recidivism making access to CI all the more important.

However, having an ICE detainer dramatically drops the chance of accessing CI.

“If you have an ice detainer, you are not on that [CI] list. These are the skills that these brothers need just in case they do get out, get released from immigration or even when if they do get sent back to their country and they have these skills that they can utilize and earn employment,” said Sao, highlighting the vulnerability of the deportable inmate population.

The APICAG Deportation Town Hall not only brought resources to its most vulnerable but also brought the community together.

“This was a great opportunity to start the conversation and to bring in resources,” said Ryan Denzer, a Stafford Creek counselor.

“There’s a paradigm shift that’s taking place even on the facility where you have the cultural groups that in previous times may have been separated from each other, are starting to come together and work together, right where they’re having like a meetings in conjunction with one another and it’s beautiful to see,” said Walrond.