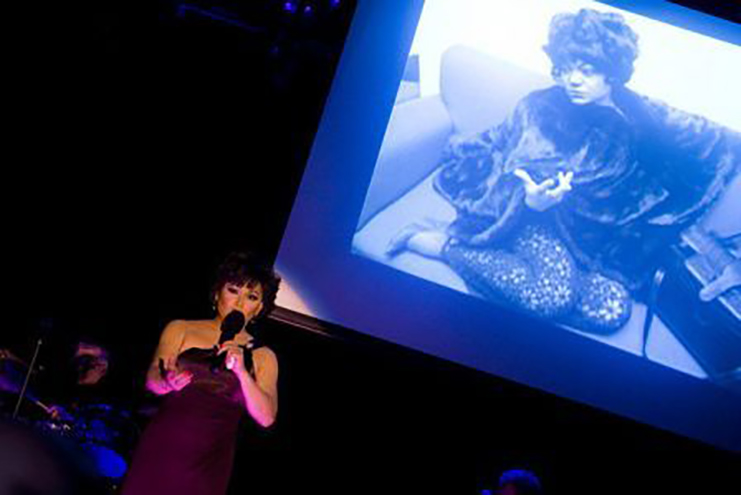 March has been Cabaret Month off and on since the 1990’s, and here in Seattle, Cabaret Month hails from 2008, when it was initially presented at Julia’s On Broadway. This year, Cabaret Month will be celebrated by a festival launched on February 27 at the Triple Door.

Seattle’s festival is produced by the Pacific Northwest Cabaret Association, whose mission is, according to their website, “to promote and to preserve the art of the cabaret: intimate storytelling through music.”

The PNWCA was founded in 2006 by Arnaldo!, a self-described dragchanteuse whose musical roots began outside of the drag convention. “I was singing with the Seattle Men’s Chorus and I was asked to perform in drag for the very first time in 1991,” Arnaldo said. “I had my second thoughts about performing publicly in drag, but I thought what ‘s wrong being in drag? I do it for Halloween!”

This new avenue led to top solo roles for Arnaldo with the Men’s Chorus, as well as a desire to explore new avenues for creativity. “I heard about cabaret but was not sure exactly what it was, and I started researching some cabaret artists and found my muse Eartha Kitt,” Arnaldo said. “I studied her songs and then someone asked me to perform at a fundraiser for Hands Off Washington, and that was my first venture with the cabaret format.”

Cabaret seemed to be a good fit, so Arnaldo next worked with friends to launch Cabaret Q and to settle into his drag persona. “After all the years of performing drag, I never really found a suitable ‘drag’ name,” he said. “So my friend Chris Dapper suggested adding an exclamation point after my real name – and that ‘s how Arnaldo! came about.”

Arnaldo credits Dennis Coleman and the Seattle Men’s Chorus with his development. “I learned so much from SMC,” he said. “It was not just an arts organization, it is a community and a political force.”

And Arnaldo developed more than his voice with the Chorus. “My awareness and my empathy were honed there,” he said. “During the AIDS epidemic, I experienced first hand the suffering and the loss, the homophobia, ignorance, and bigotry when no one wanted us on their stages and no business wanted to be part of the Pride Parade, as nobody wanted to be associated with the LGBT community.”

Arnaldo faced some of this criticism personally. “When I first started, my drag was criticized for promoting the stereotype that gay men are feminine and like to wear female clothes, plus my being an Asian gay man added to the stereotype,” he said. “On the other hand, I was also being criticized as not drag enough. I was not bitchy enough.”

He also faced disapproval for wanting to change the mold of the classic drag performance. “I wanted to sing with my real voice and not lip synch,” he said. “I wanted to be a gender illusionist and a classy and elegant lady when I am onstage, and be as much a man as I can be offstage. So I was an anomaly to most.”
He especially thanks Coleman for advising him to ignore negative public comments about his dragchanteuse persona. “This literally freed me to just be,” Arnaldo said. “If I cared about what others say, I would not be doing half of what I am doing today.”

Besides personal criticism, Arnaldo has faced other challenges in building a local cabaret community. “Three years ago I was ready to give up on the festival as I was not seeing the community grow,” he said. “I was basically financing the festival out of my own personal resources, and I am not a rich person by any means and I have a normal job like everybody else.”

But then he received unexpected financial support first from Brian Silkworth, and then from the Shunpike Collective, which now serves as a 501c3 nonprofit umbrella organization for PNWCA. “Our goal is to give 85 percent of our ticket sales to the artists themselves,” Arnaldo said. “Shunpike changed our fiscal trajectory, and I can now see a brighter future for Pacific Northwest Cabaret Association and March is Cabaret Month Festival.”

Arnaldo asserts that there are many attractions of the cabaret format. “The intimacy of the form and the freedom to create whatever you wish, the wit, the brevity, the risqué material, and the silence of the audience when you can hear a pin drop because they are there waiting for your next breathe, your next note, your next whatever,” he said. “It’s exciting when that happens.”

The diversity of cabaret especially appeals to Arnaldo. “Everyone is welcome in cabaret. There is song, dance, poetry, comedy, food, wine, laughter, tears, but cabaret is not for the narrow-minded as it can be political, global, in your face, or on your lap,” he said. “I do a song on someone’s lap every now and then and plant a kiss on someone’s forehead leaving them with my lipstick trademark.”

At the upcoming performance at the Triple Door, Arnaldo will serve as both host and performer. “I am your classic chanteuse, so expect some classic cabaret pieces that include torch, comedy, ballads,” he said.

He is excited about the varied community who will be participating. “Our vision is to create a vibrant cabaret audience and a community of artists,” he said. “Now we have more acts and more veteran performers too who have done Broadway, the New York cabaret scene, and we also have new cabaret performers who are embracing the format.”

For this, Arnaldo extends his gratitude to Seattle and beyond. “Build your community, that’s how you maintain anything,” he said. “Build bridges, not walls.”