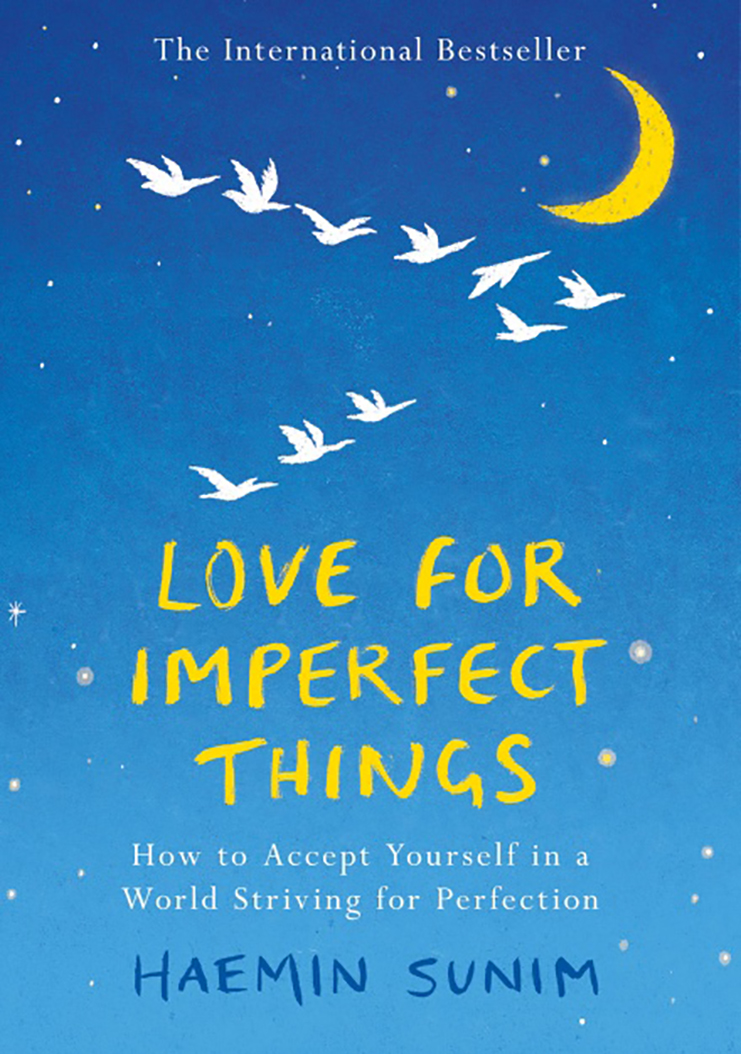 Despite having over a million Twitter followers and being an international bestselling author, Haemin Sunim is a somewhat unknown figure in the U.S. He is a Korean monk known as the “Twitter monk” or “mega monk” that rose to fame after he started publishing bite-sized pieces of wisdom acquired through his life experience, training and meditation, and, above all, from the people who came to him with their problems.

With over one million Twitter followers, his popularity gave him the opportunity to write his first book, The Things You Can See Only When You Slow Down, which stayed at the number one spot on the Korean bestseller list for nearly a year and sold three million copies. It has been published in 30 countries after its release through Penguin Books in 2017.

Love for Imperfect Things: How to Accept Yourself in a World Striving for Perfection is Haemin Sunim’s second book. Originally published in 2016, it was released in the U.S. last year in December. Like his last book, Love for Imperfect Things focuses on attaining inner peace, except this time, the attention is put on accepting oneself. If we accept ourselves fully, including our faults, we will become empathetic and compassionate, allowing us to more readily accept others for their imperfections and simply loving them for who they are: the sign of true love.

Haemin Sunim (“Sunim” is a title given to monks) was a sensitive boy attuned to philosophical questions about his existence from a young age and started reading books by philosophers in high school. He attended the University of California-Berkeley to study film but returned to his original interest of religion after realizing filmmaking was not what he imagined it to be. Afterwards, he pursued his studies by getting a master’s in Harvard and his doctoral degree in Princeton, later teaching at Hampshire College in Amherst, Massachusetts.

Not finding the answers to his spiritual questions through the academic world, he decided to explore Buddhism to experience enlightenment and became a monk. He entered monastic training in Korea and lived in a Buddhist monastery that gave him an opportunity to interact with visitors on a more personal level after Sunday services by allowing them to talk to him and ask questions over tea and coffee.

Haemin Sunim was in his mid-twenties at the time and could not offer much advice to these visitors who were often two or three times his age; all he could do was listen earnestly and compassionately, but he found that this act alone was beneficial to the visitors who often wanted to discuss universal problems that occur during day-to-day living. He realized these people were not necessarily seeking advice but wanted to find someone who could listen to them and be heard.

Over the course of several years, he became skilled at this art of listening and decided to foster his compassion by disseminating the bits of wisdom he had gained over the years. He turned to Twitter, and the rest is history. He used the attention from his first book to garner support for a school that could be a sanctuary for people suffering from problems such as long-term illnesses, depression, loneliness, disabilities and matters of the heart that deal with relationships of all kinds. This school is called The School of Broken Hearts and has two locations: downtown Seoul and Busan, which is Korea’s second-largest city. People who decide to use the school’s services can access spiritual guidance from Zen teachers and help from psychologists. It was through the experiences at this school that he wrote Love for Imperfect Things. 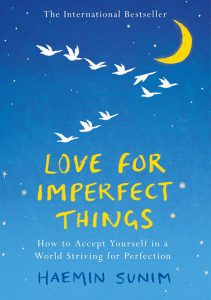 During his book tour, Haemin Sunim often brings up the story of his Buddhist master. When he was first paired with his new mentor, he was appalled that his master did not meet his idealized standard of a Buddhist monk. Instead of being austere, dedicated, an astute meditator and someone who could readily impart wisdom, his master liked to crack jokes and had a short fuse. Haemin Sunim envied one of his friends who had a master that fulfilled his perfect standards and wished he could switch his master.

After a decade passed, he ran into this friend on the street and was surprised to find out his friend no longer was in touch with his master. Haemin Sunim was shocked; he could not understand why anyone would want to cut ties with a perfect monk. His friend replied that because his master was so perfect, he expected his followers to be perfect too, so many left due to his unrealistic standards.

Haemin Sunim then realized he was lucky to have his master, who, because of his open acceptance of his imperfection, understood the imperfection of others. He was forgiving, non-judgmental, had a good sense of humor and did not take himself seriously. He still keeps in touch with his master to this day.

Love for Imperfect Things is chock-full of wisdom that I agree with and attest to after 36 years of life. For instance, “When you make a decision, listen to your heart more than the opinions of others. A decision made because of the opinions of others is one we often come to regret” is applicable to the career choices I have made in my life and the contentment I feel about those choices. Another nugget of wisdom that rings true is, “There is no change in love of those who love you for who you are, even when you make a mistake or fail. Such people are your true friends and family.”

The book will undoubtedly bring to mind people readers know and would want to recommend the book to. The following quote immediately reminded me of my mother: “The nice cutlery set, tea, wine, clothes, pen, quilt that you have been saving for a special occasion—use them whenever you get the chance. Special moments are not separate from our everyday lives. When you make use of something special, it makes the moment special.”

What I found most interesting of all was what he had to say about thoughts and emotions. These are fleeting things, even happiness. Even though one has achieved a great accomplishment, it will perhaps not live up to the hype in one’s mind and will only last momentarily before disappearing. Peace and contentment derived from silence, or “the quiet space between thoughts,” will become “more precious than anything you can buy.”

According to Haemin Sunim, this inner peace will lead to acceptance of ourselves and acceptance of others, and it is something everyone already knows how to attain; they just need the right mindset to see what is staring them in the face.

Although Haemin Sunim wrote these words of wisdom, he would be the first to tell others that there is still a gap between knowing and doing. “The hardest thing in the world is putting what you know into practice and making sure your actions do not contradict your words,” he writes in his book. “Looking at myself, the gap between the two still seems very wide. But regardless of the circumstances I find myself in, I would like to stay mindful and continue to cultivate a compassionate heart.”

It takes hard work to put what we learn into action, so don’t be discouraged if it takes time to change.