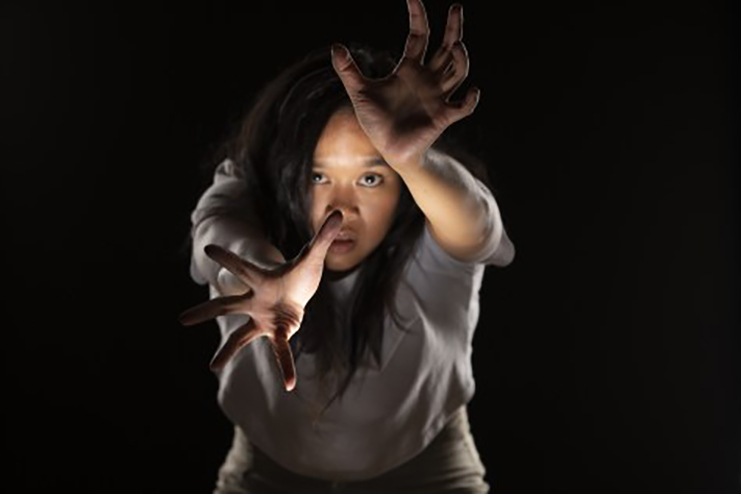 This autumn, local theatre company Pork Filled Productions is participating in a “rolling world premiere” of Prince Gomolvilas’s play The Brothers Paranormal. Following performances in New York and Minneapolis, the play makes its west coast premiere in both Seattle and Portland.

The Brothers Paranormal is billed as a comic thriller that centers on two Thai American brothers who investigate paranormal activities in the Midwest and who encounter an African American couple who have been displaced by Hurricane Katrina. “I first read The Brothers Paranormal in 2015 as PFP was planning our staged reading series for the season,” said May Nguyen Lee, one of PFP’s three producers of the show. “The use of the horror genre to explore grief, loss, displacement, intergenerational trauma, and mental health among immigrants and natural disaster survivors was an inspired approach.”

Playwright Prince Gomolvilas reports that he has long had an interest in the supernatural. “As a kid, I was fascinated by things like UFOs, Stephen King books and The Twilight Zone,” he said. “As an adult, I’ve added to those interests things like Thai culture, diversity issues, mental health, and how people deal with loss.”

But Gomolvilas warns us not to expect a typical American ghost story. “The idea of ghosts and spirits is embedded in the culture of Thailand, and by extension, Thai Americans, as it is in many Asian countries,” he said. “In the West, we tend to treat the spirit world with fear. In the East, we lean towards respect.”

Local director Mimi Katano found many reasons to take on this project. “The challenge of directing horror excited me, but more importantly, it is a well written story,” she said. “The intersection of people who have survived trauma and their connection to each other is what drew me in.”

As a playwright, Gomolvilas appreciates the contributions of directors such as Katano. “Theatre is such a collaborative medium, and the valuable perspectives of directors, actors, and designers are not something you can necessarily glean from working on your computer alone,” he said.

Katano likewise appreciates the team approach. “I have always admired PFP’s productions and wanted to take part in one of their projects,” she said. “I think the world of theatre is finally starting to change in terms or equity and diversity and now is a really good time for more Asian producers, writers, and directors to create work for Asian artists and audiences.”

The producers at Pork Filled Players couldn’t agree more. “Pork Filled has a long history with Prince, the playwright,” said Roger Tang, another PFP producer. “We chose his Big Hunk O’ Burning Love, a romantic comedy about a supernatural curse, to make the jump to full-length plays.”

Gomolvilas initially began developing The Brothers Paranormal in 2011. “Because of our past with him, we did a developmental reading in 2015,” Tang said. “One of the actors from that reading is now in the full production.”

This kind of extended focus can happen when theatres emphasize nurturing new works. “There’s a trend with Asian American theatre countries to have rolling world premieres, in which groups across the country team up to produce a script they love, and give concentrated attention and resources by producing it in quick succession,” Tang said. “That gives it momentum. Playwrights love to tell you a play really only matures after its third or fourth production.”

In addition to collaborating on a rolling premiere with Theatre Disapora in Portland and other theatres across the United States, PFP also reached out to the Mahogany Project. “The Mahogany Project supports Black writers and artists and their new works, providing a platform and opportunities for their stories to be told,” said Lee. “Half of The Brothers Paranormal’s story is carried by a loving African American couple who left New Orleans during Hurricane Katrina. It was important for us to include African American perspectives and lived experiences to inform and support the creative team at the very start of the production process.”

Lee also finds that the play conveys Asian American experience in an authentic way. “As an American-born child of Vietnamese refugees, the story of Max, his Thai family upbringing, the secrets we keep from each other and from ourselves, and the cultural expectations children of immigrants bear resonated very deeply,” she said. “I had not encountered a play that so honestly and truthfully captured similar experiences I had growing up, that I still have.”

Director Katano has likewise found this production to be illuminating. “I have learned a lot about the very notion of ghosts and what they mean to different people, why some people see them, and believe in them, and why ghosts linger, if they do exist,” she said. “There are religious, cultural, and/or mental illness components mixed into all of this and it is thought-provoking.”

She hopes that The Brothers Paranormal will be a catalyst for ongoing explorations. “If I do my job right,” she said, “it will lead to interesting conversations after the show, and ultimately that is what theatre is supposed to do.”