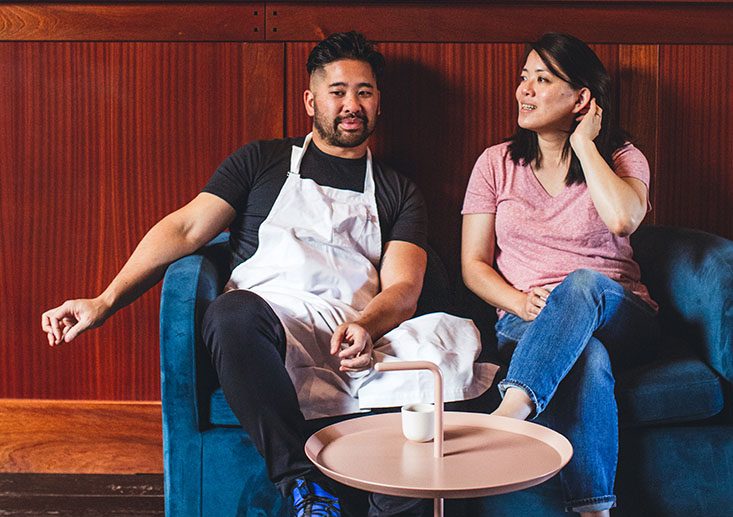 Brandon Jew is a native of San Francisco and the chef-owner of the groundbreaking, Michelin star restaurant, Mister Jiu’s. The celebrated restaurant, located in the nation’s oldest Chinatown, overlooks Grant Street – the heart of San Francisco’s ethnic Chinese enclave – a place, says Jew, “that celebrates all my influences, standing in the heart of Chinatown, the place where Chinese American food began.”

Jew – Jiu: A twice-told tale. The restaurant’s name – Jiu – incorporates the correct pinyin (Romanization of Chinese characters “spell sound” based on their pronunciation). During his grandparents’ immigration process, on entering the U.S. when asked their surname, they responded, “Jiu” but officials wrote on their official entry documents, “Jew”. Not wishing to cause problems, the family kept the misspelled name. Many years later, on opening his business, Chef Jew chose to use the correct spelling of the family name, “Jiu”, and baptized his restaurant Mister Jiu’s.

Housed in an 1800-era building, Mister Jiu’s opened in April 2016 and has since become a fine dining destination, honoring the cuisine of Jew’s heritage. Employing a reinterpretation of the Cantonese food of his youth, he combines a modern approach using Chinese techniques and classic combinations of flavors with Northern California’s seasonal, locally sourced ingredients. The aesthetic results: a refined, nouveau expression of Chinese-American gastronomy demonstrating how versatile, creative and exciting Chinese cuisine can be.

For years, Jew struggled to define himself using Chinese and American weights and measures to determine who he was – his “authentic self” – attempting to resolve a Goldilocks dilemma of finding the “just right” answer. In his Gold Mountain – Golden State restaurant dishes, that captures a strong balance of his combined Chinese-American cuisine, he found the solution. He could create a harmonious equilibrium within himself by acknowledging both of his birthrights – parentage and place – depending on the situation. He now feels “at peace with being in between (the) two cultures”. Mister Jiu’s success, based on its celebrated fusion pairings, attest to this in its many tasty, sought-after dishes, such as: Prawn Toast (milk bread stuffed with a prawn mousse of bacon, ginger and scallions; crisped in lard, and finished with a hit of aioli and roasted, pulverized shrimp shells), Pork Wontons (wrappers dyed black with squid ink; filled with a peppery pork filling, garlic chives, squid and Sichuan peppercorns); Seared Napa Cabbage (a combination of Yuzu sauce, potato crisps, Chinese chive relish and potato puree).

Within a very short time, Jew and his restaurant have collected a number of impressive awards: from his Michelin star, granted less than six months after Mister Jiu’s opening, to Bon Appétit’s list of “Best New Restaurants in the Country” in 2017, to Thrillist “San Francisco’s Best Chef” in 2017, to Bold Italic’s “Most Impressive San Francisco Restaurant Pivot of 2020”, and being named a 2020 finalist for the James Beard “Best Chef California Award” (the winner will be crowned in late September of this year).

Full disclosure. When the restaurant first opened in San Francisco under the glitter-atti fanfare heralding a new dining trough, I had already booked a flight to my favorite West Coast travel city where I have “left my heart” quite often. A lickety-split thinker regarding food-centric matters, with lightning speed I quickly dialed in a reservation. On arrival the following day, executing a high-speed sprint to my waiting table, I studiously scrutinized the menu. Spent after a rather gargantuan meal on a tower of endless plates and platters, I blessed the waiter and waddled, well wasted out into the night. The experience, as you may have guessed, did not disappoint – surroundings, service, attention to detail, dinner – even the creative menu design – all impeccable, delicious, memorable!

A caveat to consider. Potential and return diners beware: the restaurant changes its menu according to season and availability. In addition, recipes continue to be readjusted or modified over time to improve the dishes and create new ones, so don’t count on being able to enjoy the same dish you’ve read about or dined on previously. One means to resolve the possible problem: purchase the book, learn to cook the dish, and keep the recipe at hand!

When the 285-page book arrived, the handsome, heavy-duty cover (a deep emerald green color ranging, I guessed, somewhere between Pantone PMS 7732C – PMS 7733C) with embossed gold lettering caught and held my twinkling eyes. It proved to be a portent of good things to come: glorious drool-worthy, in-living-color food photos; full-page depictions of S.F. Chinatown scenes; interesting chapter insert pages detailing personal insights and biographic illuminations to draw one into a storybook tale of Chinatown, Chinese cuisine, and everything in between; the addition of Chef’s Notes within recipes to clarify and augment aspects of ingredients, processes, techniques, equipment and strong recommendations. This is no ho-hum book, I wowed out loud.

Reprinted with permission from Mister Jiu's in Chinatown: Recipes and Stories from the Birthpla...
1 of 3

Recipes from the traditional time-worn to the blended unconventional latest may trigger thoughts of putting the book aside due to worries over interest or lack of skill sets. Not to worry, they are not overly challenging. Hoisin Sauce, a favorite in Chinese kitchens, is reincarnated as Peanut Butter-Hoisin Sauce and is as easy as it sounds to reproduce. Likewise, Pigs in a Blanket (an old American standby) was created by Jew’s father and hits the serving platter as Chicken in a Space Suit! There are also plenty of highly recognizable old Middle-Kingdom-in-America standards utilizing minor twists in ingredients: Sourdough Green Onion Pancakes, Yellow Corn and Squash Blossom Egg Drop Soup, Hangtown Egg Foo Young. Of course, there are also some newly minted recipes to challenge the intrepid cook: Pig Trotter Ham Sui Gok, Gong Bao Romanesco and Carrot Ma Jiang Mian – the names and ingredients may be somewhat off-putting for now, but for adventuresome types, they may be just what your wok calls for!

Not to dissuade anyone, but several recipes include starting from scratch and making basic ingredients from the get-go. Translation: some recipes call for hours, days, weeks in pre-prep time before you can even begin to work on the dish itself, e.g., Pickled Shitake Mushrooms take two days for pickling, Lap Cheong (Chinese sausage) requires 3-5 days to cure the meat, Lap Yuk (cured pork belly) consumes an entire week for marination and curing. But never mind, since only you can tell, one can also simply purchase pre-packaged ingredients at the Chinese market and get on with it from there – wink, wink…

Brandon Jew and Tienlon Hos’ Mister Jiu’s in Chinatown is a welcome cuisine, culture, historic and biographic work rolled into one. It seems appropriate that Chinatown, “the place where Chinese American food began”, is where a renaissance of Chinese American food has taken place. As I head to the kitchen, book in hand and wok in mind, the only thing left to say is – Let’s eat!