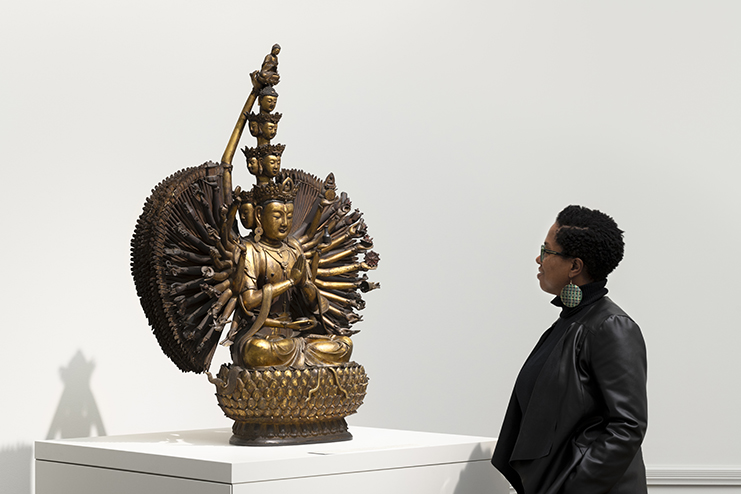 Facing the outdoor sculpture Black Sun by Isamu Noguchi with the iconic Space Needle in the distance under a sky of varied cloud formations, the Seattle Asian Art Museum overlooks the city. For years, it has been known as a depository of quality East Asian art. The founder, Dr. Richard Fuller, collected many items of prized Chinese jade, and a noted curator, Dr. Sherman Lee brought exceptional historic Japanese paintings and sculptures to the museum as well.  In 1953, the museum hosted the prestigious Exhibition of Japanese Painting and Sculpture, which allowed great masterpieces from Japan to be seen here for the first time, an event that was sponsored by the Japanese government.

Carrying on the glories of the past, the museum is poised to celebrate the 21st century in grand fashion. It has expanded and its interior layout has been redesigned and re-imagined. The new Asian Art Museum opens in February of 2020 with an exhibition pulled from the museum’s collection, entitled Boundless: Stories of Asian Art.  Foong Ping, Foster Foundation Curator of Chinese Art, and Xiaojin Wu, Curator of Japanese and Korean Art, worked for three years, digging through the contents of the entire collection to thoughtfully select the artworks for this new era.

Don’t miss this opportunity to see great Asian art all together, new and old, totally re-set in a new environment. It adds credence as to why the reputation of this museum’s collection has remained relevant over the years. More importantly, the museum has expanded its scope, and the exhibition includes more Asian diversity, including a, selection of artwork from the Middle East, South Asia and Southeast Asia.

Offering a new perspective, the curators selected works for each gallery in accordance with different themes rather than region, allowing objects from across Asia to be showcased together. The exhibition space is newly painted with the addition of lighting tracks and other carefully designed features that give the viewing space a cleaner and more modern-looking sensibility.

What makes Asian art so profound is that Asia at large has roots in several great civilizations, from ancient times in China to the Indus Valley to Mesopotamia. In addition, a deep cradle of religion and philosophy, poetry and literature, calligraphy and painting developed to enrich what we know as its culture. The wealth of these traditions continues to influence the arts.

In the gallery, Writing Images, Painting Poems, many objects resonate. A highly established style of Chinese ink painting of a plum, A Branch of the Cold Season by Yang Hui, is done in collaboration with calligraphy by the monk, Zhen of Hua’an in early 15th century.  The room also includes Japanese masterpieces acquired in the 1950s; an early 12th-century segment of 36 Poetic Immortals by Fujiwara no Sadanobu, and the beloved hand scroll known as The Deer Scroll (1610s), an exquisite collaboration of painting and calligraphy by Sōtatsu and Kōetsu.  A small but shining gem not to overlook is a portrait drawn with a fine line entitled Calligraphy: An Artist at Work from Iran (Persia), executed around 1600.

Religion is paramount, connecting many Asian countries. Although the complexity of an intermingled long history among diverse cultures results in national boundaries, it’s not necessarily identical with cultural identity. The Silk Road brought Buddhism from India to China, and the Islamic maritime trade brought Islam to Indonesia in the 14th century. This network creates an amazing diversity of distinct characteristics and aesthetics of religious art (mostly Buddhism but some Hinduism, Jainism, Islam and local regional religious practices) which appear at different historical times, and even in smaller cultural regions of each particular ethnic group.

This theme is exemplified in the gallery, Sacred Texts and Tales, where visitors will find beautifully decorated religious texts from across Asia. The manuscripts of the Buddhist Sutra from the 7th to 8th century is attributed to Dunhuang, Mogao Caves, China. Blue Qurán, gold writing on indigo-dyed animal skin parchment, is considered early and simply filled with the precious solemn style of an Arabic calligraphy from the 9th century. An Indian painter of the 18th century, Manaku of Guler, painted The Secret Passion of Radha and Madhava (Krishna), which is lively in an expressive painting style.

In the gallery, What is Precious?, the work demonstrates how religion and daily life are intertwined. One of the most unique pieces in the show, Kudurru (ca. 1300 BC), is a boundary stone that originated in the ancient Mesopotamia region and came from Babylonia, which is now modern Iraq. This stone was the official certificate that this gift of land came from the king and the recipient had a religious power of ownership.  The Nepalese Tayo, Bride’s Necklace (late 19th century) was worn by a very young girl as a living manifestation of the goddess Durga during a festival in the Kathmandu Valley. The precious stones, such as turquoise, coral, rubies, pearl, jade, amethyst and rose quartz, testify to the wealth of trade and exchange in the region.

A long history, a highly sophisticated philosophy and wealth of culture has matured into a unique quality of high art. Well known is the brush and ink monochromatic painting tradition of Asia, which originated in China. In a room with the theme “Picturing Nature”, the relatively new acquisitions are Lotus and Ducks and Pine and Rock by Bada Shanren, both painted in the 1690s. Among cultured gentlemen of China, Shanren was unique and his paintings could break the boundaries of tradition and penetrate the heart of even the most casual onlooker, and more specifically, inspire even today’s contemporary artists. 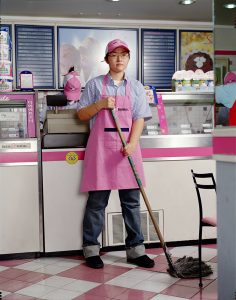 In the room titled Are We What We Wear?, one finds it’s not simply a gathering of costumes.  Japanese Pilgrim’s Coat (18th -19th century) is made out of linen with temple seals. Devout pilgrims visit many temples through a specific route, getting stamps at every location. This tradition is still very much alive and remains a popular practice in Japan with locals and foreigners alike. Hairpin Used in Boy’s Tonsuring Ceremony (ca. 1700-1900) is from Thailand. However, the custom of tonsuring a baby or child’s head can be found across the globe. A Korean photographer, Yeondoo Jung, provides an opportunity for a young woman who works at Baskin Robbins in Seoul to realize her dream of Arctic adventure in his photograph, Bewitched # 2 (2001). In the caption, there is a comment by the artist that seems to capture what it means to be young today. It reads, “Who I am is not always who I want to be.”

This is just a small portion of the long-term exhibition sorted out into 13 themes. That being said, this is a great introduction to start the new era. Yet there are still significant gaps in Asian Art history that need to be filled.  One example is that though the brush and ink painting tradition originated in China and permeated Korea, it also blossomed in Vietnam.

Seattle’s Asian American communities are extremely diverse: South Indian, Bangladeshi, Bhutanese, Cambodian/Khmer, Cham, Chinese, Filipino, Hmong, Indonesian, Japanese, Korean, Lao, Malaysian, Mien, Mongolian, Nepalese, Okinawan, Punjabi, Singaporean, Sri Lankan, Taiwanese, Thai, Tibetan, Vietnamese, Pacific Islander and many Middle Eastern countries. It can be a challenge to represent them all, but for now, let’s celebrate the fact that the museum has come this far. One hopes in the future that the museum will continue to reflect the multi-cultural communities of Seattle and develop a system of communication that will be mutually beneficial to both.