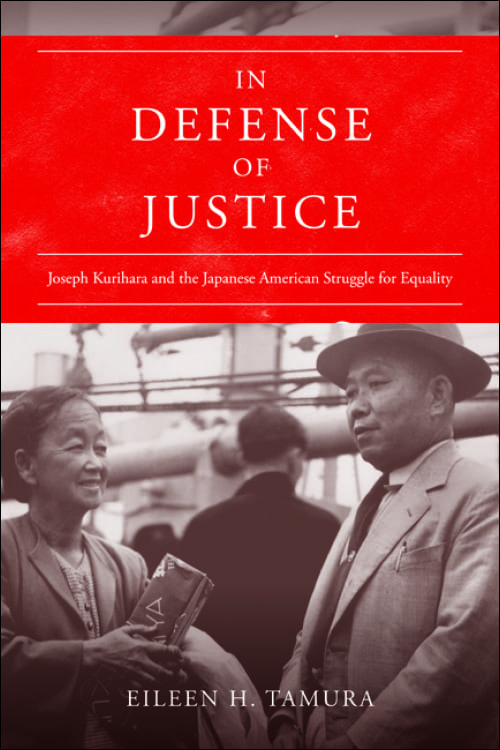 University of Hawai‘i professor Eileen Tamura has undertaken in this book, In Defense of Justice: Joseph Kurihara and the Japanese American Struggle for Equality, a biography of Joseph Kurihara whose history highlights the deep injustices of America’s persecution of Japanese Americans during World War II. Kurihara, American born and educated and also an army veteran who served during World War I, was a staunch advocate and defender of “The American way of life,” of the grandeur of the theoretical underpinnings of the ideals of democracy, of equality before the law and liberty and justice for all.

A self-starter, he went to Catholic schools in Hawai‘i and continued his education in San Francisco at St. Ignatius School where rigorous academic standards insured Kurihara’s grounding in ethics and ideals. His goal was to become a doctor and he particularly took to heart the school’s intent to develop Christian manhood with strong moral character. He also studied elocution, acquiring skills in writing and speaking.

As Tamura says, “What St. Ignatius gave Kurihara [was] a nurturing of notions of justice for ordinary people, and an appreciation of the power of oration in persuading them to defend their rights.” These ideas were to remain with him for the rest of his life, though, as we find, they brought him to the breaking point during his incarceration in concentration camps during WWII.

He did not become a doctor, but at the war’s beginning, he was working as a navigator on a tuna fishing boat, earning a good living and enjoying a seagoing life. During slack time, Kurihara honed his writing by contributing to the Kashu Mainichi and the Rafu Shimpo, writing essays like, “Go East, Young Man, Go East,” advising Nisei to go farming in eastern parts of the United States. The war put an end to the large Nikkei participation in West Coast fisheries and Kurihara could not find employment when all Nikkei were taken off the boats.

When it was becoming apparent that the government was formulating plans to incarcerate the Japanese American population in the West Coast, Kurihara approached Togo Tanaka, editor of the English language section of the Rafu Shimpo if he could speak on behalf of the Nisei against the forced removal. He was appalled and sickened by the Japanese American Citizens League (a group of young Nikkei) leadership’s acquiescence to the orders, calling them “a bunch of spineless Americans” and he vowed to fight and crush them.

In the Caiifornia concentration camp Manzanar, Kurihara jumped to assume a leadership role in the revolt on December 5, 1942 when a JACL leader, Fred Tayama, was beaten and hospitalized. In the turmoil that overtook the camp, he inflamed the crowds by declaring the JACL leader as an informer, a betrayer. Speaking before a crowd, he intemperately shouted, “Let’s kill him! Let’s kill him and feed him to the roving coyotes!” In the ensuing turmoil, two young men were shot and killed by the Army, which horrified Kurihara.

Here, Tamura takes the time to sorting out some of the basic divisions roiling the community. The JACL’s version of Americanism was compliance and cooperation with the authorities. Kurihara, though just as much a believer in America, thought that the citizen’s role was to protest injustice. He said that what happened at Manzanar was a “damnably disgraceful and irreparable action against the very principal(s) of democracy.”

Then, there were inmates who were sympathetic in varying degrees to Japan, others who were just plain angry and humiliated by their incarceration, and many who were frightened and confused.

“Manzanar was a powder keg and the Tayama incident ignited the whole barrel,” said Togo Tanaka. “[Resistance] did allow them to assert themselves in a way that expressed their individual sense of dignity and their collective sense of pride in their ethnoracial identity.”

The Japanese American community exhibited resistance in many ways and it is only now that the camp experience is being reexamined in a much broader and deeper way, creating a much different image of the group than that which had prevailed for many years, that of cooperation and resigned patience, of volunteering to serve in the army to prove their loyalty. The tragedy of our incarceration is that government policies drove these divisions within the community, bestowing untold suffering and damage on the population. Patriots like Kurihara just gave up and ended up in Tule Lake, the segregation center. He renounced his citizenship, was sent to Japan, a land he had never visited. He remained there until his death.

The ordeal of the camps has obviously had a debilitating affect on the Nikkei population and it took many years before an organized effort was mounted to demand an apology and some redress. As we learn more about what happened to individuals like Kurihara, we see the tremendous sense of betrayal and disappointment that the incarcerated inmates felt, that their plight forced choices which altered their lives forever.

Tamura has done a great job of research and examination of this individual and of the history of the Japanese American community during WWII. And as we come to an appreciation of the destructive effect of the incarceration, we have to shake our heads. What a tremendous waste it all was.