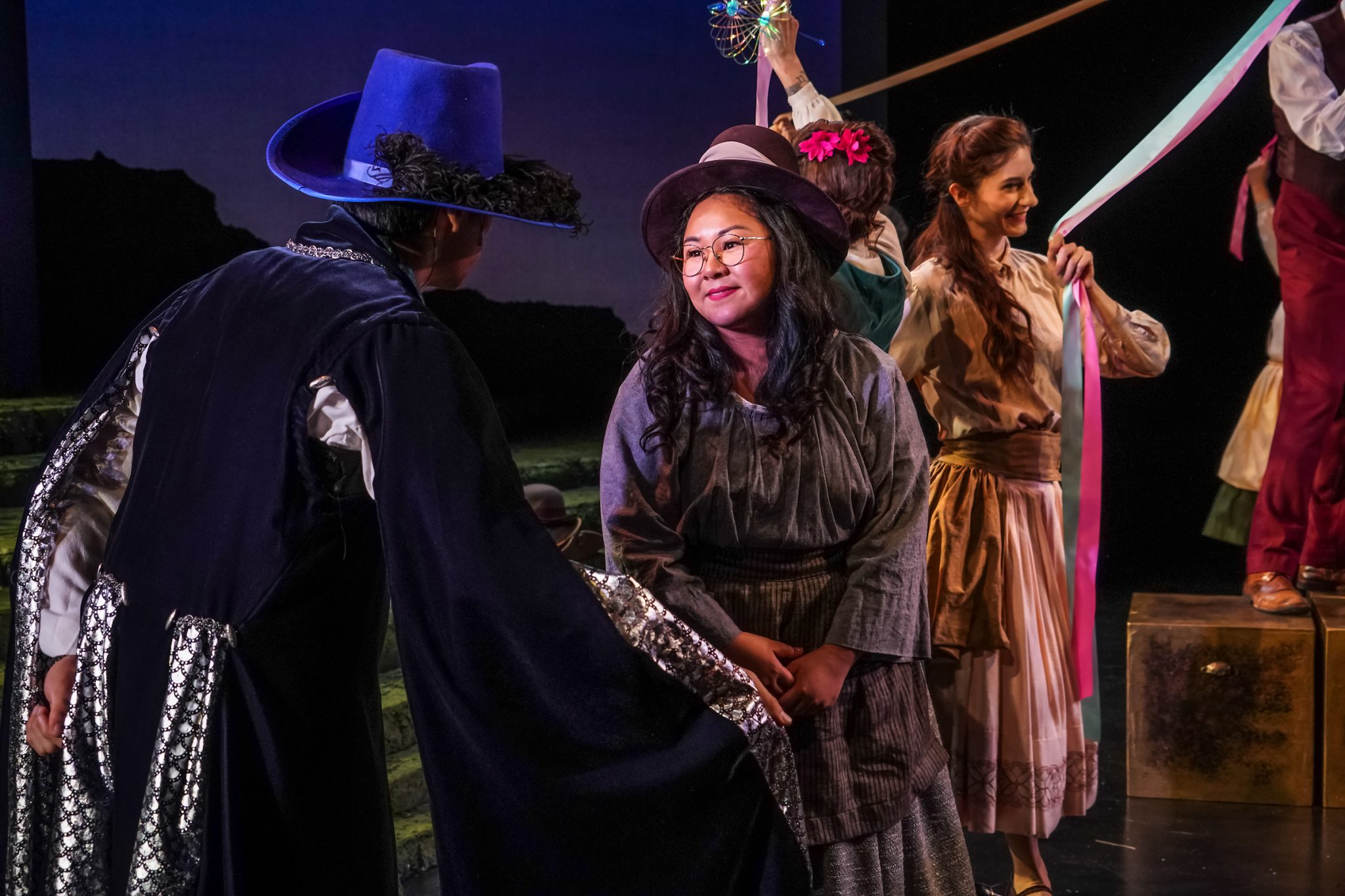 Seattle’s own Book-It Repertory Theatre specializes in bringing good books to the stage while preserving their narrative flavor, and this month the spotlight shines on Diana Wynne Jones’s book, Howl’s Moving Castle.

A tale of witches, wizards and demons, Howl’s Moving Castle has been adapted and directed by Book-It’s co-artistic director, Myra Platt, with original music and lyrics by Justin Huertas.

Huertas was thrilled at the opportunity. “I had only worked with Book-It on smaller projects until this year, but I’ve always loved everyone here,” he said. “Myra approached me with the possibility of writing music and lyrics for Howl’s Moving Castle, and I said, ‘obviously yes,’ not knowing whether or not Book-It would obtain the rights to adapt the book.”

Then the good news arrived. “The second Myra said ‘we got the rights,’ I literally fell on the floor,” Huertas said. “I was so excited.”

So, too, was actor Sara Porkalob, who plays the lead role of Sophie, a girl who encounters the otherworldly realm of the castle of the Wizard Howl. “I love new work,” Porkalob said. “While this is an adaptation, a musical theatre incarnation of the novel is completely new, and that’s what intrigued me the most about this project.”

Since this project follows both the book and a movie adaptation, the team had its work cut out. “I am a huge fan of the Miyazaki adaptation, so that had its draw,” Porkalob said. “But it quickly became clear that what we were making was going to be a thing that was separate from that aesthetic.”

This new project has been a process of discovery for everyone involved. “I’ve never adapted a book into a musical before,” Huertas said, “so I’m loving the process of getting inside Diana Wynne Jones’s head, getting inside her characters’ heads, and finding how best I can support their wants and needs through song.”

This process has also allowed Huertas to become more familiar with the unique Book-It presentational style of dramatizing storytelling. “It has been surprisingly easy and fun to write lyrics in the Book-It Style,” he said. “I’m finding there’s an odd power that the characters hold when not just narrating but singing their narratives. That’s been a fun conceit to play with.”

This particular work has also broadened Porkalob’s perspective on the Book-It style. “I sometimes think that the ‘Book-It style’ can encumber the forward momentum of a theatrical narrative, as people want to see and interpret what’s happening rather than being told by characters in the third person what is happening,” she explained. “But, in this instance where we have a magical world without a clear set of ‘rules’ and a narrative that jumps and skips through time and space, the Book-It style helps establish a clarity that the play would otherwise not have had.”

Beyond concerns of presentational style, developing this new musical adaptation hasn’t been without challenges. “I think the biggest challenge with this piece so far has also been the most fun, figuring out what the show looks like!” Huertas said. “We’re having a blast finding the balance in clarity of storytelling—book, music and lyrics—with engaging imagination in this awesome and complicated magical story.”

Porkalob concurs that clarity has been at the forefront of the team’s minds. “Like any new work, keeping track of the story arc while incorporating constant edits has been challenging,” she said. “Of course, we’ve been looking at the story for months and many of its mysteries are crystal clear to us, but to a first-time audience, we have to be sure we communicate the narrative in ways that are accessible to all.”

Porkalob and Huertas also agree that collaboration has been the key to bringing the project to fruition. “Over the past year, Myra and I have developed an incredible, I would call it, shorthand-slash-telepathy,” Huertas said. “We’re not dealing exclusively in our fields—she gives me incredible input on the music and lyrics and I bounce ideas off of her that pertain to the book.”

Porkalob likewise feels free to take a comprehensive view of the project. “I do what Myra says and sing what Justin writes and can be super candid regarding how I feel about both of their choices,” she said. “I also trust them a lot, which means that I can challenge them and they can challenge me and we all know that it’s done in the service of making the play stronger.”

How would she describe the overall process of creating this new musical version of Howl’s Moving Castle? “It’s very liberating.”