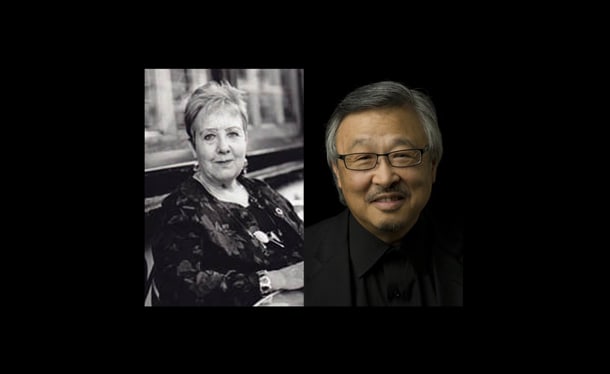 Reading a collaboration between two poets—where poems make a kind of call-and-response—has a natural swing to it. The initiator poet must spark the sequence; the responder must carry the beat, break through to new landscapes of conversation, manage momentum.

Boogie-Woogie Crisscross, a rollicking, heartfelt collaboration between Seattle poet Lawrence Matsuda and his Ireland-based muse and mentor Tess Gallagher is one such literary worldbuilder. Beginning with poems from a shorter series (Pow! Pow! Shalazam!, adding cross-weaving synthesis (Blue Cocoon) and ending with a series that melds free verse and Japanese form (Wild-Haired-Labyrinth Renga) this email correspondence takes the reader across the continents and decades in a heartbeat.

“This was a real adventure. I’ve never written anything like it—I couldn’t on my own,” Gallagher said. “There really haven’t been very many of these, so I hope we are making fresh tracks in the snow with this book.”

Gallagher reminisced, “I found myself getting involved in material I wouldn’t have come to without Larry’s stimulation—such as Marilyn Monroe, drive-in movies, and certain now-classic car lingo. It was lively trying to give evidence of an Irish reaction to some of his dilemmas—Irish humor always extends to one’s failures.”

“Even glancing off his poems was fun when mere direct comeback would have been dull. Larry can be so funny,” Gallagher added.

Matsuda’s correspondence with Gallagher first began when a friend, Alfredo Arreguin offered her the manuscript of what would become A Cold Wind from Idaho, Matsuda’s poems about his family and the World War II Japanese incarceration camp, Minidoka. Thus began a longer literary friendship, with Gallagher advising Matsuda on revisions to the manuscript until it was picked by Black Lawrence Press in 2010.

The first instigator poem of Boogie-Woogie Crisscross is the sensual “Kisses” by Matsuda.

Lawrence Matsuda: I liked the evocative 1940s cover of the Kisses book [Portable Kisses by Gallagher]. Also I knew that 20 years from now no one would find our e-mails in the attic. So I decided that we would do some emails that were poems that would be published and saved. To that end I challenged her with the poem “Kisses.” I wanted to push her toward the edge because I knew she could not not respond to a challenge.

Aoki: Tess returned your volley with another sexy poem, “What They Missed,” with that immortal line summing up her mother’s photo: “one leg extended flirtatiously/like a ramp to her private Berlin.” How did you craft your response called “Fifteen Love, The Bloop-Shot Return”?

Matsuda: I regarded “What They Missed” as a tennis slam or kill shot. It was like something so fierce that it would knock me out with one punch and I would run away. But I decided that a serious response would only beget another kill shot so I gave an oddball (cartoonish—Road Runner) cartoon response, “Fifteen Love.”

Aoki: How was the co-creation of this book different from your collaboration with visual artist Roger Shimomura on Glimpses of a Forever Foreigner: Poetry & Artwork Inspired by Japanese American Experiences?

Matsuda: With Roger, I sent poems and he read them and then created sketches about the emotional content as he interpreted them. So it was his visual interpretation of my written words and images. Working with Tess, we exchanged words and images and responded to each other’s statements. We dueled and tried to outdo each other in terms of finding new directions, topics, viewpoints, and images. It was like a “Duelin’ Banjo” exchange or much like two musicians exchanging riffs and building off the previous riff.

Aoki: Are your poems in response the “first ones to arrive” or were they the best drafts out of possibly several poems that sprang from an offering from Tess?

Matsuda: The first poems of the three sections initiated each exchange. We exchanged poems rapidly—sometimes the next day and then when the section was done we revised each section. Wild- Haired-Labyrinth Renga was revised at least 28 times and the others were in double digits.

Aoki: “The Paper Airplane of Justice” (Tess) and “Ghost Dahlias” (Larry) take on what the reader realizes is a theme in the Boogie Woogie dance—justice and fairness. Can you both speak a bit more about how the idea of justice informs your poetic subjects?

Gallagher: The gangster and comic book sections were the most fun, but oddly enough the poem I loved writing most is the one I dedicated to Larry called “Button, Button” which is very political re: Irish situation of women … [Regarding the theme of justice] I think I could say we are both mistrustful of government and keep an eagle eye toward what it asks of us and how it treats those who haven’t full bargaining power.  Justice, getting it—yes, I know I have a kind of cry going inside these poems which is a serious undertow to the more jocular, playful elements in our exchange.

Matsuda: Tess is part Native American and was subject to discrimination as a young child growing up in Port Angeles and I was born in Minidoka, an American concentration camp.

In many ways I believe that even though people can overcome barriers and injustice, it doesn’t mean that they necessarily have it made. Instead I believe the experience can motivate them to speak up so that others are not victims of injustice. I believe this is a critical role of an artist—to have people understand and walk in the shoes of other people. If an artist can touch someone’s heart and change their attitude, that is more powerful than laws that dictate what is right and wrong regardless as to whether people agree.

Aoki: Tess talked about what poems were the most fun for her. What were yours?

Matsuda: I liked being the 1940s-ish gangster in “Even Gangsters Need “Rs.” It is so ridiculous. I love the references to drive in movies, Crown Victoria cars that sidle like horses, the notion that “adjectives are the pimples of the English language,” and how removing an “r” can change meanings. At one time I was a printer. I like how the mood changes and in the end it is becomes nostalgic and sentimental—which is a surprise that ties back to “Kisses.”

Aoki: What advice would you give to beginning poets, or poets who have not tried this kind of collaboration?

Gallagher: Try to get a conversation going. See what falls out. Don’t be too circumscribed. … By making something together you get pulled out of your singular orbit and that’s really mad-wonderful.

Matsuda: Just be fearless, once the process begins you can find yourself in mental places, and situations you never would have visited alone. It is through the collaboration that brings new things out in you and your collaborator so that you almost create a new person or voice that is not you as an individual but you reflecting off of someone else and new aspects of yourself. Ultimately, as Tess says go have fun—sometimes poems are focused too much on unhappy things.