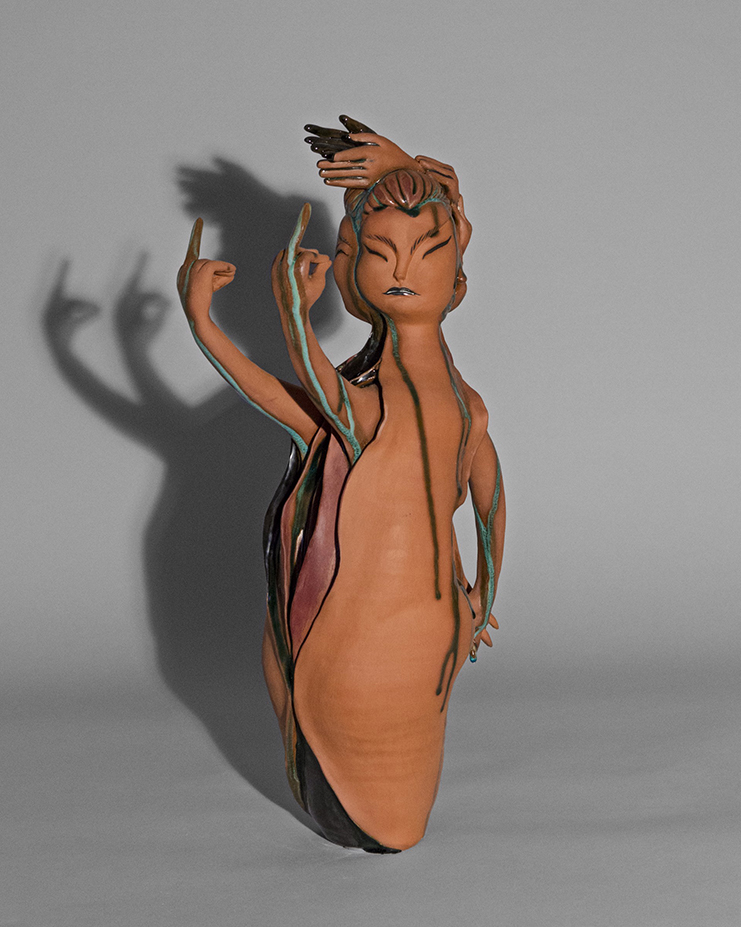 On view through November 19th at Art Xchange in Pioneer Square is a dual exhibition featuring the work of Ann Leda Shapiro and Hanako O’Leary. Drawing on themes of global mythology and reverence for the natural world, Bodies of Land is a meditation on the point of connection between our interior and exterior landscapes. The exhibition weaves together O’Leary’s sculptural work and Shapiro’s elaborate watercolors to highlight the slippery boundaries between body, landscape and cosmic order.

Ann Leda Shapiro has spent a creative lifetime exploring the politics of gender and sexuality. Her early work invokes an almost childlike curiosity around normative binaries and representations of the masculine and feminine.  After the Whitney famously censored her first major solo show in 1973, Shapiro turned her back on the art world and delved headlong into exploring the body through traditional Chinese medicine. This path eventually led her to the study and practice of acupuncture, deepening her understanding of internal systems and feeding directly back into her artwork. Having painted for more than fifty years, this latest series finds Shapiro expanding on her knowledge of the body by drawing a parallel to the systems and equilibrium of the planet as an organism. These stunningly intricate watercolors are grounded by inky backgrounds filled with hundreds of tiny points of light– negative space that is carefully left on the paper through tightly controlled, repetitive mark making– that are at once reminiscent of stars and of pin pricks.  Shapiro’s holistic comprehension of the body reunites the emotional and clinical aspects of our physical forms, as evident in each of her paintings. Tree limbs entwine themselves with celestial bodies, root systems morph into earthy veins, and every brush stroke pulses with energy. These surreal landscapes appear to at once represent the interior, geological and cosmological, adding a Gaia-esque dimension to the work and underscoring the inseparability between the three.

Hanako O’Leary’s Izanami series (so named for the Shinto goddess of creation and life) is a collection of clay-based work that literally marries the earth with the feminine form. This growing series began as a response to the artist’s experience with abortion in 2018 and is primarily comprised of War Masks – inspired by traditional Hannya masks and featuring anatomically detailed vaginal renderings– and Venus Jars, inspired by Venus figurines: paleolithic statuettes depicting a supreme feminine being or creator.  At once addressing the politics of penetration, the right to pleasure and the joy of self-ownership, these works represent a breadth of feminine experience and emotion. The war masks are a kind of armor for battle, while the venus jars express the feminine capacity to contain and nurture. While Izanami has been more widely surveyed (most recently at King Street Station earlier this year), a new piece of work takes center stage in the Art Xchange gallery. Bakoku – a Japanese word meaning “Mother’s Country”– is a large-scale undulating form of a woman sculpted from wire and covered with dozens (if not hundreds) of origami paper vulvas, some embellished in gold-leaf. The sculptural framework is visually reminiscent of the earth/body work of Cuban feminist artist Ana Mendieta, yet the scale and addition of the origami layer give the piece a topographical presence that feels more like an island than a body. O’leary originally intended to produce the paper vulvas on her own, but after realizing how time and labor intensive the process would be, she enlisted the help of her community to complete the piece. The shared effort to realize her vision gives Bakoku a joyful presence and reinforces the themes of interconnectedness, responsibility and stewardship that run through the rest of the show.

Despite their generational divide, the two artists share a friendship that overlaps with their creative practices, and even maintained virtual drawing sessions at the height of the pandemic. Their spirit of camaraderie is a testament to the feminist ideals underpinning their work and adds to the richness of this exhibition.  That two artists at such different points in their careers have been brought together in a show so complimentary and cohesive speaks volumes about them both. Their willingness to explore the mysteries of existence, embodiment and femininity should serve as an uplifting reminder to all of us that we are connected to one another, and to the land.