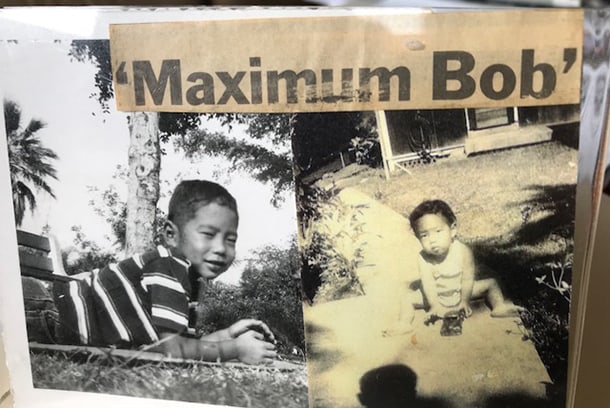 Before I was born:

Mid-1800s, Commodore Mathew Perry come to Edo Bay. Make demands. “We like use your bay fo’ trade and ship repair. Open up the Bay for us or we blow you up,” dey say. Japan know what going happen. Dey see the cannons on the ships. Dey get no choice. They say, “okay.”

Later, Japan think about it. “We need change how we do business or they goin’ take everything and we goin’ get noting. So they start building dere own industries, like ships, airplanes and all kine weapons. New kine machinery, new kine stuff.

Same time, Hawai`i changing. Get British first (Captain Cook), then missionaries from America, they “help” royal family change religion and land ownership rules in Hawai`i (1848 Mahele), and by the turn of the century, they gain control of the land, economy, uh, well, the whole country, call it Hawai`i and w’en petition to become colony of the USA (Why not? They w’en use the U.S. Navy to help them overthrow the legitimate Royal governing body.)

The flag for the Territory (euphemism for “colony”) of Hawai`i was/is still absurd as a state flag, but truthful for the circumstances, a combination of the Union Jack and the stripes of the U.S. flag.

My Feelings As A Human Being Just Before Death

My Feelings as A Human Being Just Before Death

I have a joyful feeling that I must go away to another world in the near future. Judging by the sound of my heart flow, I have no confidence in living very long.

This joyful feeling, which I can die without fear, is not due to a belief in God, nor a dreamy heaven with its blossoms of beauty of the arts. A creature of nature desires to live, and by my philosophy of human life, gave me this satisfaction.

Even the doctor doesn’t know my body condition (because of my poverty). I don’t care to know more about it, especially when more knowledge would cost money, money which I don’t have.

All mankind have higher thinking power than other creatures. The study of the various systems of thought explaining the causes, principles and relatives of natural and moral law, or the reasoned systematic science of any subject, we call philosophy, which some people may think or believe is religion or god.

With this contemplative thinking power I made an effort sacrificing my blood to a life of raising my beloved children to be educated brainy persons in this world. To do this, they have had to study hard and all the children became studious (diligent) persons as I wanted.

For this reason I am now satisfied and ready to die anytime without any fear and worry.

Thinking this and that

And lest we forget, the 30th anniversary of the signing of Civil Liberties Act of 1988

…the hard work and dedication of the Washington Coalition on Redress could be seen in the impressive final tally on the Civil Liberties Act among members of the Washington State congressional delegation: 10 yes, 0 no.

—From Born in Seattle: the campaign for Japanese American Redress

We can weep, get angry, get depressed over the Supreme Court decisions of the past few weeks, but we must pick ourselves up and fight back. Just remember that the Supreme Court was rarely a friend of the poor, the minorities, the indigenous. Except for the Warren Court, it has been mostly reactionary. More on this later.

Note: These “Bob’s World” stories will be go back in time and relate it to what’s going on in the world currently. It’s been hard to think in 15-minute sequences, but this format may help me focus on what is happening in my world and not get too carried away. This column will be a continuing strip of Bob’s World, now and before.

There will be more about the Mahele in future columns, but if you’re interested in what it was and what it did, Lilikala Kame`eleihiwaha, Hawai`an scholar, has written an excellent book about it: Native Land and Foreign Desires, Honolulu, 1992.