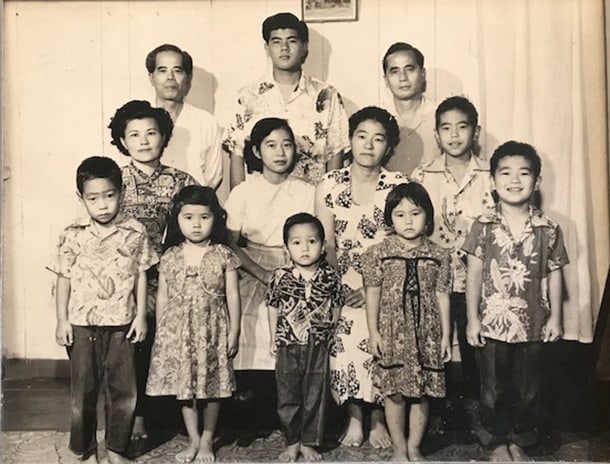 Mom: Why do you keep telling him all these things. He’s too little to understand.
Dad: When he grow up, he understand.

When Mom reached retirement age, she decided to take a trip to visit all her children, so she planned a vacation to visit San Francisco where she could meet with Roy who lived in San Francisco, and Ann, her husband Johnny, and her grandson Carlos, who lived in Gilroy. Then she would go to the Maryland/Washington D.C. area to visit with my cousin Irene (and her husband George and their son David), Tom, my oldest brother, and Toki, my oldest sister, who was like a back-up mom to the younger children. (Toki often told me that she was changing my diapers when she in grade school).

Then she would fly back to the Northwest, check with Sam in Seattle, fly south to Portland to stay with my daughter Mira and me for a few days, and then fly back home. Great plan. Except the morning after she reached Portland, she had a bad stroke (aneurysm), and ended up staying in Portland for close to two months.

Toki decided that I would need help take care of mom, so she set up a schedule for my siblings who would come to Portland. Sam, who was living in Seattle, could come whenever he could, presumably on weekends.

When mom was released from the hospital, we were given some instructions on what we should do, one of which was to ask Mom questions like, “What’s your name?” “What day of the week is today?” “Who’s the President of the United States?”

Mom would refuse to answer, she was offended. So Tom and I thought about interviewing her for about half an hour a day about herself. She agreed. And we learned a lot.

But after the third day, she said, “No more questions. My memory is fine. No need to go on.”

And then she clammed up.

Dis and dat from interview and conversations with mom

Mom was tri-lingual. I never heard Mom speak pidgin. So I couldn’t count that as one of her languages.

Tom: What language was spoken in the house?

Mom: Yes. At first. As the years went by, more Japanese was spoken. And then more English. I was also going to Japanese school after regular English school. They didn’t have Uchinanguchi school.

After mom got to my home, she noticed that even after Ann and Carlos came in to help, I was still just hanging around and wasn’t going to my shop. My shop was only 3-4 blocks from my house.

Mom: You’re taking a vacation? You seem to take a lot of vacations and sick leaves. How are you getting along? You know, financially?
Me: Well, Roy helps me out a lot.

Mom: Oh good. Daddy would be very happy. He always said, “I hope everybody help everybody when they can.”

We had a good laugh at that.

Me: Grandpa owned the farm, you said. What were the Depression years like?

Mom: It was different than other folks, because we had guaranteed income. So we didn’t suffer as much as other people. Jiisan had signed a three to four-year agreement with Libby’s that they would buy all the pineapples he could grow. And he did have good sweet pineapples. Libby’s actually honored the agreement. They paid for all the pineapples but then came in with a bulldozer, dug a ditch, then pushed most of the pineapples into the ditch. They said if we gave away all the pineapples they couldn’t recoup their losses. Po Ho (what a waste)!

Mom: People used to call our house “haole house;” it was the first in the area. It meant that we had real plumbing (in the kitchen, bathroom and furo), and electricity. And some extras. We also had a huge stainless steel tub to make tofu and a still to make okolehao (ti leaf liquor).

Manoa House Time (I was about five or six years old)

Mom: Don’t ever go by those boards over there. It’s dirty.

Naturally, I was curious. I go look by da boards ovah deah. Then I wen hear somebody flush toilet, wen peek undah dah boards. Was one ditch goin’ fo’ one big hole. Oh, no wondah she wen tell me stay away! Get one open cesspool ova’ deah!

Mom: Jiisan had loaned out a lot of money to folks on good faith that they would pay it back when Uncle Paul graduated high school. However, that was never paid back. That money was for Uncle’s college money. Jiisan was very angry, but what could he do? They didn’t have the money. Uncle went to trade school instead. Electrician.

A year after Dad w’en die, Toki and Roy w’en leave home, I was the only driver. So the car was mine.

I had to drive folks around, though. Was rifling around da glove compartment when I see little pieces of paypah, say $5 Paul, $3 Paul, $10 Paul, etc. Guess Uncle Paul was running a Quickie Loans to Mom and Dad.

As Tom explained to everyone, in the culture, the oldest son gets everything the Dad has, including debts. Better to be a rich man’s first son than a poor man’s son.

Jiisan had also noticed that Mom, his trilingual daughter, was doing well in school, getting awards in both English school and Japanese school. He offered to pay her way through Normal School, somewhat unheard of in that era, which was around 1935. Mom decided against Normal School. She was smitten with Dad.

About the same time, Jiisan and some of the family decided to take a trip to Okinawa, and asked Mom if she wanted to visit Okinawa, and again, she refused, deciding to stay in Honolulu with Dad.

It’s hard for me to think about the choice that Mom made. Mom and Jiisan were in some way far ahead in the culture game, but Dad for being such a revolutionary was a frustrated reactionary in the culture.

“It’s not good for people to see that your wife has to work,’ Dad once told me.

Sometimes I wonder what would have happened if Mom had at the time taken what her Dad had offered her.

Then I realized what a stupid thought that was. Answer: Well I wouldn’t be here typing this story out.

Me: Mom, when I was little, Dad used to lecture me about learning all kinds of stuff, politics, mathematics (especially geometry), remember that?

Mom: He thought you would be a great social reformer.

Mom: Yes, Great. He wanted you to be a lawyer.

I burst out laughing. (Although at the time, I had been hanging out with some National Lawyers Guild folks.)

And, she added seriously, “I think he thought you could carry out his dreams.”

(Note: “Jiisan” is “grandfather.” Jiichan is “kid talk” for grandfather.)