When “Uncle” Bob Santos died, we lost a dear friend and champion for low-income and homeless people. He made a difference in the lives of so many people. Uncle Bob was not just known for his tremendous work in preserving the community in Seattle’s Chinatown International District, he was a hero to many disenfranchised populations and homeless people.

He was appointed under President Bill Clinton in 1999 to head up the local U.S. Department of Housing and Urban Development (HUD) office as the regional administrator. Uncle Bob was the first HUD official in the nation to open up space in the Federal Building for a shelter for men and women. The Low Income Housing Institute (LIHI) in partnership with SHARE sponsored a shelter there.

When housing activists from Operation Homestead and homeless people occupied a rundown vacant building in downtown Seattle to bring attention to the loss of low income housing, the police came and arrested people.  Uncle Bob happened to know the owners of the building.  He worked with me to contact the owner to negotiate a long-term lease. The building, Arion Court, now contains 37 renovated apartments for homeless veterans and others. This would not have happened without Uncle Bob stepping in and taking leadership!

Uncle Bob was a key advocate along with former Seattle City Councilmember Cheryl Chow, to make sure that homeless people got basic hygiene services at the downtown Urban Rest Stop. When the mayor was opposing the initial location of the Rest Stop at the Glen Hotel, this delayed the Rest Stop from opening. Uncle Bob made sure that federal funding was saved to build the Rest Stop at the Julie Apartments and to pay for annual operating costs for showers, restrooms, and laundry.  This enabled thousands of homeless people to stay clean and healthy so they can stay employed, or find a job, and apply for housing.

He also worked with LIHI to transfer HUD and VA foreclosed properties to house homeless people. That is how LIHI acquired the Othello Duplex in Rainier Valley and Tukwila House. Uncle Bob was so happy he could make this happen. He had a big heart. During Thanksgiving he would bring turkey dinners over to the residents.

There is a funny story of when we tried to name the apartment building at Sand Point Magnuson Park after Uncle Bob. I told Uncle Bob that LIHI and the residents (we operated the building under self-management) wanted to name the building after him. He said that he would first have to check with the HUD attorneys to see if that would be okay. He then told me that the HUD attorneys said “no” that it would be a conflict of interest because he is a HUD official and LIHI gets HUD funding. I told the residents that this could not happen. The residents said “To hell with the HUD attorneys, we are going ahead and naming the building Santos Place, after Uncle Bob.”  So that is how it happened!

After a big battle with the business community, LIHI acquired the Fleetwood Building in downtown Olympia to create 43 apartments for homeless men and women.  We had to put in an application to HUD for Section 8 Moderate Rehab funds to renovate the property. We needed an official letter from the Mayor of Olympia stating that the proposed housing was consistent with the city’s downtown housing plan calling for more affordable housing. The mayor refused to give us that letter because he was not in support of homeless housing in downtown. Getting this letter was a threshold requirement to obtain funding. I called up Uncle Bob in desperation and asked for his help. Uncle Bob then called the mayor and told him that if he did not sign a letter for us that he would make sure that all federal funds would be cut off from the City of Olympia. So this is how we got our letter! We successfully competed nationally for HUD funds for the Fleetwood, which resulted in capital renovation dollars and Section 8 operating support.

Uncle Bob got a Commendation for Courage from HUD because of what he did during the 1999 protests demonstrations against the World Trade Organization (WTO), otherwise known as the Battle of Seattle. Anarchists, protestors, and homeless young people had illegally occupied a vacant building (now Spruce Street School) next to LIHI’s Julie Apartments to make a statement about the lack of housing for homeless people. When we found out, LIHI worked with the building’s owner to provide water, first aid kits, flash lights, food, hygiene, and safety supplies. But after a few days, the owner changed his mind and decided that he wanted to evict everyone and called the police. At first, the police were distracted by the protests and riots in downtown and did not pay much attention to this building. Then the precinct commander and undercover agents met with me and said that if the anarchists and homeless people did not move out by a set deadline they would take action, storm the building and even use smoke bombs to force people out. I knew that the anarchists had secured the building in such a way that would make it impossible for large numbers of people to get out quickly or safely. The front entrance was rigged so that only one person at a time could get in or out and everyone had to pass through an obstacle course.

I had been talking to the occupiers trying to mediate a solution for them to come out peacefully without the police having to take forceful action. I called Uncle Bob for help. I offered that if the occupiers left the building voluntarily that LIHI would put them up at the Julie Apartments (which was vacant before undergoing renovation). We would then have the owner agree to work with LIHI to develop one of his other sites for low-income housing. With the police in full riot gear surrounding the building ready to action, and frantic parents on the street trying to persuade their children to get out, Uncle Bob went inside to present the “deal” or compromise for everyone to leave peacefully. Finally, after a short tense period of time, where Uncle Bob was seen on the roof negotiating, he emerged from the building and said he got agreement for everyone to leave. That is how LIHI put up anarchists, protestors, and homeless young adults in the Julie for a week during WTO!

It is sad to see the passing of Uncle Bob. However, he would want us to carry on with our work for housing justice. So let’s celebrate his life!  Let’s keep in mind Uncle Bob’s special efforts to help homeless people. He was always there for so many of us. 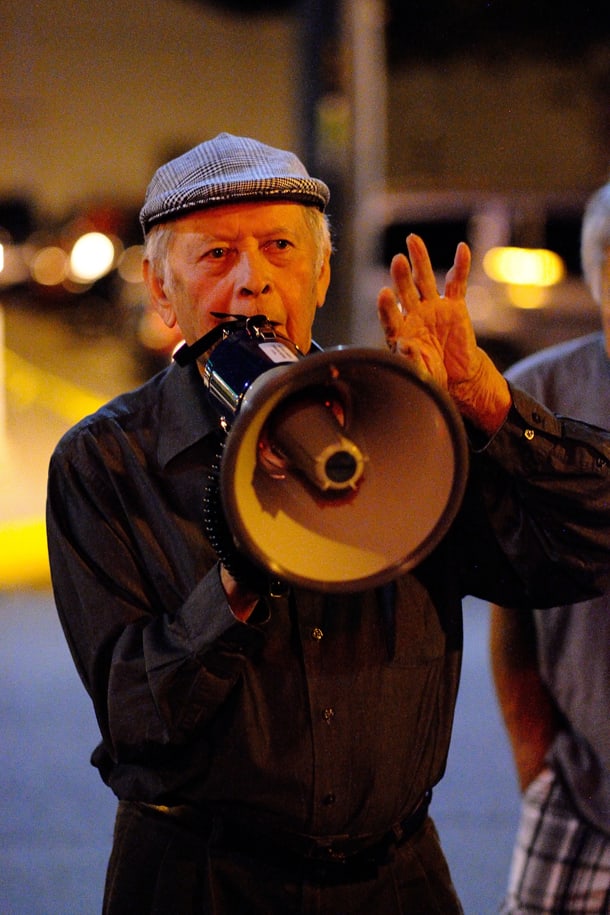