Last night, November 20, supporters of the Seattle World School (SWS) beat back an effort by the Board of Directors for Seattle Public Schools to move the school from its current Central District location on the site of the former TT Minor Elementary School.

In a narrow 4-to-3 vote, the board voted down a motion by its director, Kay Smith-Blum, to reserve TT Minor as a neighborhood elementary school. The motion would have broken promises made to SWS that TT Minor would be its permanent home. The motion also included plans to use the building for the next several years as an interim location for central area middle school students, halting the district’s plans to develop SWS on the site. Board member Betty Patu also strongly supported the motion.

Since its founding in 1980, SWS has been moved six times, from one temporary location to another. SWS, formerly known as the Secondary Bilingual Orientation Center, is one of only a few schools nation-wide designed as a preliminary educational portal through which immigrant middle and high school students can learn English while they transition into the public schools. When the 12th grade curriculum is added next year, students will have a supported path to graduation. International Community Health Services has operated a school-based clinic at SWS since 2011.

TT Minor closed its doors in 2009 as part of district-wide cuts. The following year, the school board and the public approved levy funds to reopen TT Minor as a permanent home for SWS, allowing the school to achieve stability and plan for future growth as a full-fledged high school. TT Minor’s central location allows SWS to be within reach of families living in all parts of the city, according to a spokesperson for Friends of Seattle World School.

Upon hearing about Smith-Blum’s motion to take TT Minor away from SWS, parents, teachers, students, and volunteers, armed with hand-drawn signs, banded together to speak out against the motion.

“This is a slam-dunk. We have the plan, we have the staff. We have the money. Let’s go ahead and give Seattle World School a home,” said board member Michael DeBell, who opposed the motion to relocate SWS.

Board member Harium Martin-Morris, who also opposed the motion, said the Board needed to keep its promise to immigrants and refugees: “This is one of our most vulnerable communities. Let’s give them a home.”

Following the vote that stopped the motion, SWS Principal Concie Pedroza said: “I am thankful that the school board and the School Superintendent have decided to make it a priority to move forward to support planning for the Seattle World School, and that my school community is finally going to have some stability for the next few years.”

Maria Ramirez, chair of Friends of Seattle World School, said she and other SWS supporters were pleased with the school board’s decision, but cautioned that there is still much work ahead in designing and building the permanent home.

“We would have been very unhappy if the school board had voted against us,” Ramirez said. “But we still have a long way to go to realize the vision.”

Photos from Wednesday’s school board meeting: 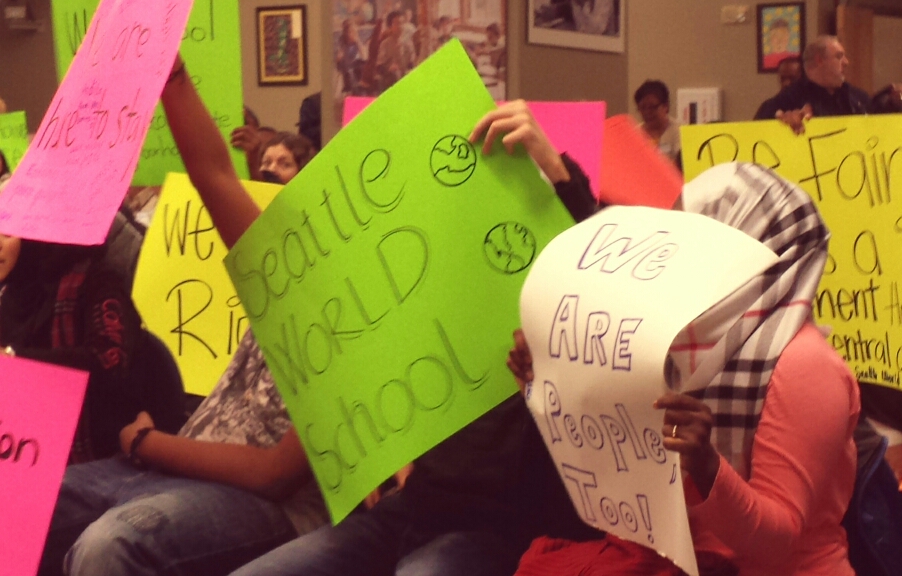 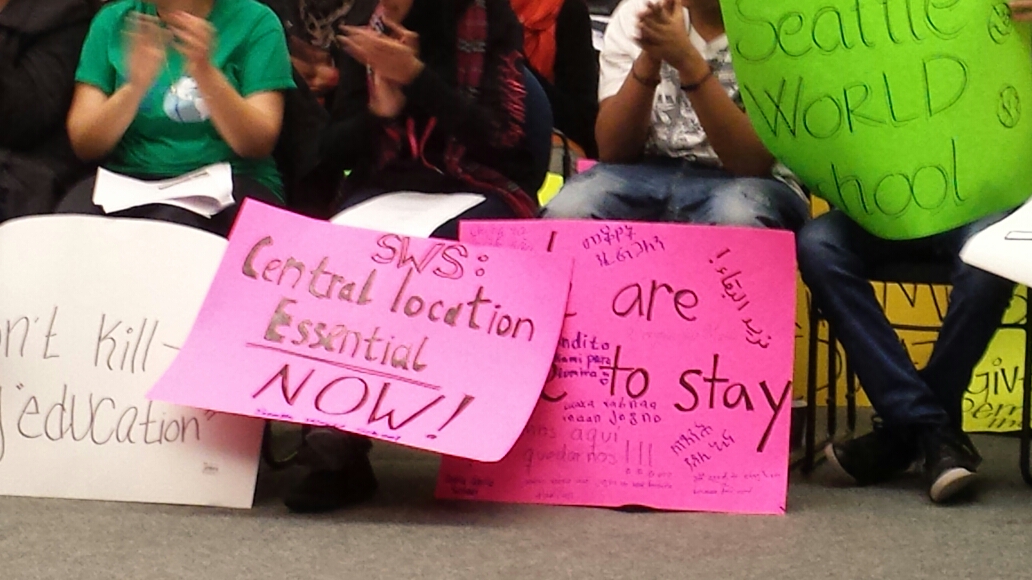