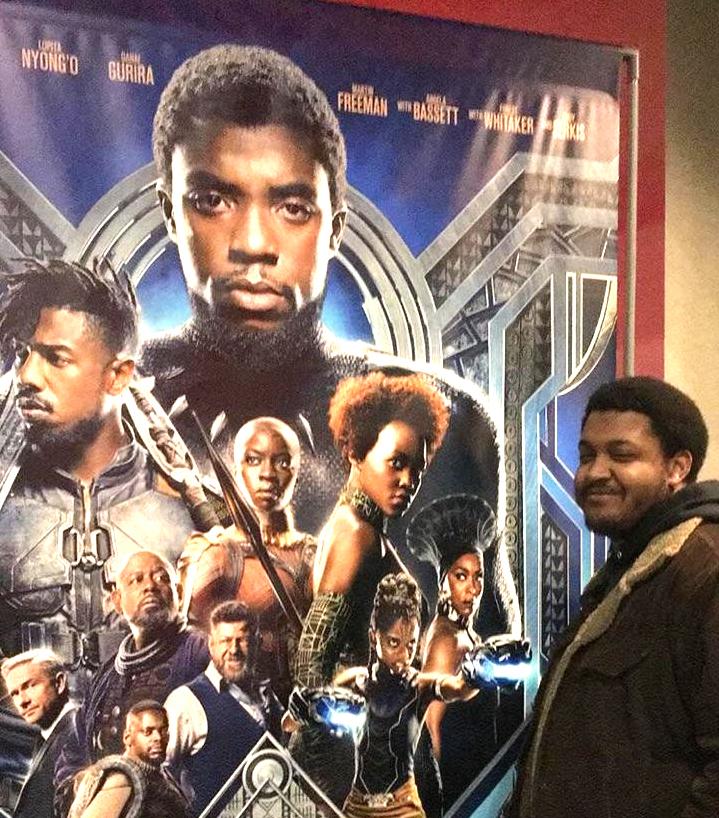 Black Panther was amazing. It was exquisitely choreographed and exceptionally well-written. Marvel Studios’ eighteenth installment also presented a story that spoke to the nuance, importance and timeliness for the everyday lived experiences, thoughts and frustrations of both Black Americans and the diaspora’s experiences of colonization and marginalization as a whole.

I vividly remember getting that “talk” when I was ten years old about police brutality. I felt a twisted knot indicating the unfairness of all of this in my gut. Could this be? Don’t our lives matter? “We should fight back!” I screamed as my mom drove me to school. As I got older, I’d learn and come to normalize the reality of America’s hatred of Blackness.

What did this film mean though? It touched on a number of themes, perspectives and even political and social questions and issues that we deal with every day. Before I begin, there will be mild spoilers to follow. If you’ve not seen Black Panther, please know that I will be describing no more than six scenes from the film directly.

Let’s talk about Black Panther as a character first. Black Panther premiered in print in Fantastic Four, issue 52, in July, 1966. Ironically enough, he was created by two white men, Jack Kirby and Stan Lee – both comic book titans – who considered the lack of Black independent and non-derogatory representation in comics problematic. At that time, the only Black characters featured in pop culture were stereotypical caricatures of Africans and African Americans; remember, at this time, the KKK propaganda film Birth of a Nation was still considered a “classic”.

Many somewhat falsely attribute Black Panther’s name and depiction to the rising prominence of the 1960’s-1970’s era Black Panthers organization. While the politics of the era inspired the writers, the character actually predates the real life organization. Nevertheless, in the 1998 run of the comics by Christopher Priest and in the 2016 iteration of the character written by The Atlantic Magazine’s political commentator and author, Ta-Nahisi Coates, the Black Panther provides vital commentary on the wealth gap within his own country, U.S. foreign policy in Africa, and racial oppression here in the U.S.

In the past there have been other Black-led films, such as the Blade Trilogy in the 2000s and Meteor Man and DC’s Steel in 1993 and 1997, respectively. In each instance these projects were under-funded and/or undeveloped into a mainstream and lucrative franchise. Black Panther’s $201.7 million opening last weekend challenged a longstanding norm in Hollywood which, unsurprisingly, stated that films led by Black actors were a lost venture, from the start. Now there’s no disputing it: Hollywood must include Black-led films, PoC films and particularly, Black Women-led films, as the Dora Milaje (the all-women Royal Guard of the film) and Danai Gurira’s Okoye were fantastic.

The politics of it all

The film sets up a number of dichotomies from a philosophical point of view: isolationism versus colonialism, national versus a pan-African racial identity, and ethnocentrism versus internationalism. More importantly, it spoke to the dual consciousness and the nuances of the African diaspora.

In the opening narration, we are told the story of how the nation of Wakanda’s development was affected by the presence of the valuable mineral, vibranium, and how Wakanda pursued a policy of isolation due to the desire to maintain its traditions and nationalism, while elsewhere we see the rise of colonialism, slavery and wars of conquest across the globe.

The film quickly and purposefully transitions to a flashback to 1992 Oakland, CA, to set the tone. We are introduced to the main villain’s father, N’Jobu, as he’s planning an armed assault on the California National Guard in response to the beating of Rodney King and the L.A. Uprising that ensued. N’Jobu is the brother of King T’Chaka, who is the titular Black Panther’s father. Once King T’Chaka, the former Panther, discovers N’Jobu’s plan and the theft of their vibranium, the prince eloquently defends his radicalization; a defense that in 15 seconds encapulates the injustice and despair America has imposed upon Black people here. He becomes radicalized by his experiences of racial discrimination, the drug war in Black neighborhoods, over-policing, systematic poverty and redlining, and arrives at the solution that Wakanda’s advanced technology should serve the purpose of liberating oppressed African people across the globe in what would amount to a global racial revolution (in some countries, an outright race riot).

Despite the horrible implications and reality of his plan, his goal is simple: liberation. Something that’s not unreasonable, historically speaking. This scene sets up the important conversation that says more about our present-day America than Marvel’s fictional universe: America doesn’t care about Black people, it never has. It has to be pushed to do so. Therefore, the question is, how do we create that better society?

The idea of whether or not to use armed self-defense to fight for civil rights and liberation has been an ongoing historical dilemma for African Americans and other oppressed groups in this country. On the one hand, armed self-defense seems like the most direct way to meet a racist and indifferent state (or colonial authorities) to get immediate results. On the other hand, non-violent action and, on a lesser note, gradual improvements, have been argued as a way to more effectively and pragmatically address the issue of disenfranchisement and injustice.

If people rose up in armed self defense, quite frankly, America would murder all of us. Even with the slim chance that armed defense was successful, our society would be even more bitterly divided and crumble beneath its own division. Nevertheless, the impulse to embrace self-defense comes from the reality of powerlessness in the face of direct oppression.

The film provides a depth of intellectual material which could be written into multiple think pieces. We see Shakespearian masterstroke that creates this critical conflict on a few levels:

1. The sins of the father come to define their children; both the Black Panther and his cousin, the advesary, Kilmonger, are driven by their father’s actions and perspectives.
2. This sets up the dichotomy of isolationism versus global conquest.
3. There is antagonism between tradition and modernity, between whether or not to maintain their isolationist ways or to join the international community and potentially trade their vibranium-based technology, or use it to intervene to protect and support oppressed people across the globe.

The complexity of the villain, Killmonger, who adopts his father’s desire for armed revolution, lies in his identity as a product of America’s racial experience. In the film, we learn that he grew up an orphan after the death of his father at the hands of the former King T’Chaka, joined the military due to poverty, and experienced the full brunt of America’s systemic oppression of Black Americans. In the film, after he overthrows the Black Panther in ritual combat, he admonishes the Wakandan ruling council and says, “There are about two billion people who look like us who have been put through hell, while you have sat here [being] comfortable. All of that is going to change. Right now.”

T’Challa, the contemporary Black Panther, is also extremely compelling and a wonderful contrast as someone who is dealing with the burden of leadership without having been exposed to the kind of pain Killmonger had endured. Chadwick Boseman’s depiction of the Marvel hero, Black Panther, immediately reflects the narrative’s inspiration from the Shakespeare tale Hamlet. As the new ruler who has to maintain his throne and avoid usurpation by hostile forces after his father was killed in the previous Marvel Studio’s film, Captain America: Civil War, he attempts to maintain Wakanda’s traditional isolationism in order to follow the path of his father and previous kings. The isolationist attitude on display comes from a deep-seated nationalism in the Wakandans. It can be best reflected when a character opposes the idea of accepting refugees from neighboring countries saying, “The problem with refugees is they bring their problems with them.” As portrayed in the film, this nationalism was constructed as a defense against the outside world. But toward the end of the film, T’Challa comes to question it, given Wakanda’s status as a leader in technology.

In the end, however, it’s T’Challa’s reconciliation of tradition and the need for change, both domestically and internationally, that is even more compelling. The breaking down of the dichotomy between isolationism versus global conquest is a result of T’Challa’s ideological conflict with Killmonger, and it offers an interesting idea on how to move forward. Though it comes off a bit colorblind, he rejects that dichotomy and pursues a path of development to overcome injustice instead of using force or ignoring the problem, like previous rulers of the small kingdom.

What does this all mean?

From the perspective of many, the most striking feature of the film is how it established an empowering conversation. The film’s main conflict-driven by a desire for revenge versus a desire to maintain what one has is a compelling one that every historically oppressed population is faced with every day.

In the film, Killmonger’s malevolence was a reflection of his experiences in American society and the military. America only taught him violence and how might makes right, a very real lesson that every Black American and other folks of color get on a daily basis. The very same over-simplified absolutist and violent perspective comes from the need to survive. Plus, Killmonger’s line in the end was a magnificent piercing dagger of existiential truth: “Just bury me in the ocean with my ancestors, who jumped from slave ships because they knew that death was better than a life of bondage.”

In the end, T’Challa does something truly revolutionary. He’s moved by Killmonger’s motivations and those of his ex-girlfriend Nakia, who was running undercover intervention operations at the beginning of the film. He decides to open up outreach centers to empower the larger Black diaspora in America and other underprivileged peoples across the globe and to multilaterally intervene in issues by opening up Wakanda to the international community.

T’Challa’s acknowledgement of Kilmonger’s pain was the acknowledgement of a pain that many of us feel every day, and this fictional leader was able to stand tall and do something about it. That was powerful. As I write this right now, with my right fist in the air, that image is still powerful and electrifying.

The real-life systems of oppression and privilege that permeate our everyday lives, and the norms and institutional culture that support the status quo, are built on a legacy of injustice. The oppressed can make art that weaves their dreams of liberation into works of fiction, like how vibranium was weaved into the Black Panther’s outfit, but that’s not gonna change things in the long term. We need a sustained commitment from people with privilege; folks who benefited from centuries of colonization, slavery, redlining, who deleted aunties and uncles from Facebook as they declared in their Facebook feed, “America will be great again.”

People who are most affected by the consequences of injustice have carried the weight of pushing society forward all along. If you don’t want to be on the wrong side, then take concrete action to dismantle privilege. Even if it costs you a bit. Even if it’s a risk, take it.