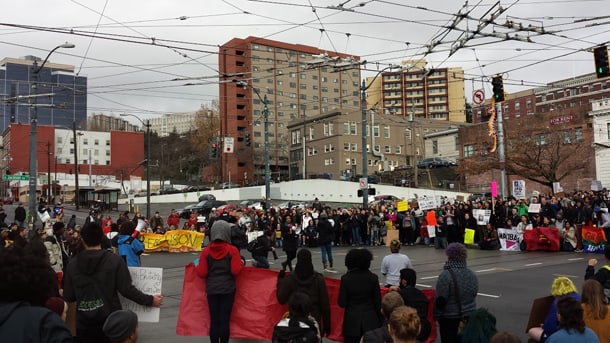 Chants of “Black lives matter! Black lives matter!” echoed through the streets Saturday afternoon, December 6, as demonstrators marched down Jackson Street through the Chinatown/International District. Organizers had rallied to show resistance to the national epidemic of police brutality against the black community.

The peaceful march blocked off Jackson Street and the rally was momentarily held on the cross street of 5th Avenue. Access to the Chinatown/International District transit tunnel was closed off to prevent interference with public transportation.

Organizers of the protest compiled a mission statement:

Brown was an unarmed eighteen-year-old Black man who was shot by police on August 9. On November 24, a grand jury decided not to indict police officer Darren Wilson for shooting Brown.

Organizers of the protest also stated:

“We, the youth, are the next generation of this country. We are the voice of the future. If we want to live in a world where people are not afraid of the police we have to continue to protest and fight for change. This event is to help spread awareness about a problem that has been happening in the United States for years. We are tired of people being killed simply because they are black, simply because of who they are. The recent shooting of the Brown family’s child was the last straw. People are angry now. We have to use our anger to fuel this movement. We cannot stop until we see the change that we want.”

Garner’s last words captured in a video that went viral: “I can’t breathe.”

The march originated at Garfield High School and ended at 5th Avenue and Cherry Street, in front of the Seattle Police Department Headquarters.