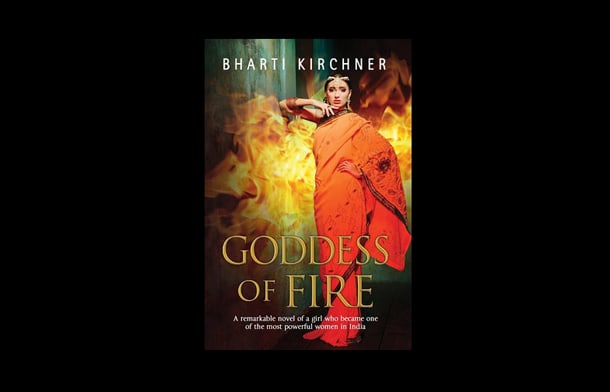 Bharti Kirchner and her writing are well-known to Seattle audiences. The Indo-American author of five previous novels, four cookbooks, and numerous essays on travel, food, and books is a familiar figure at book readings, writers’ workshops, and community events in the region. Her popularity was apparent at the recent Seattle Public Library event featuring her new novel, Goddess of Fire, which drew a large audience and enthusiastic questions from many who had been eagerly awaiting this new work. Unlike her previous novels which are set in contemporary times, this latest is a historical novel set in 17th century India. At the same time, there are some familiar elements in this work as well—a strong female protagonist who overcomes hardships, detailed descriptions of places and people, and a well-paced narrative.

The novel opens with Moorti, a young Bengali widow, about to be burned in her husband’s funeral pyre by villainous relatives. As she struggles against them, she is rescued by an Englishman, Job Charnock, a factor at the East India Company. An improbable story line is it? Not quite as this is based on historical fact. Job Charnock was an important player in the fortunes of the East India Company in Bengal and was helping them establish trade in saltpeter and textiles and managing relationships with a hostile Mughal emperor and resistance from local rulers. Historians have noted that Charnock did marry an Indian woman who may have been rescued from a funeral pyre. Little else is known about her except that she was renamed Maria and the couple had four children. Charnock is credited with founding Calcutta (or Kolkata as it is known today) which eventually became the capital of British India.

Bharti Kirchner imaginatively reconstructs Moorti/Maria’s life and explores how two people vastly different in social status, race, class, religion, and language come together. Theirs is a romantic story interrupted by war, illness, and political intrigue. The narrative includes a cast of diverse characters—cooks and servants, Indian merchants, a local queen, English traders, English women in search of husbands, soldiers. Maria survives and thrives and in her evolution we see some of the same traits as Kirchner’s earlier women characters who are resilient. This novel is engaging and brings American readers into an era of Indian history that is relatively unknown in this country. The plotting is deft and keeps readers wanting to know what happens next. That, of course, is what many readers look for in a novel.