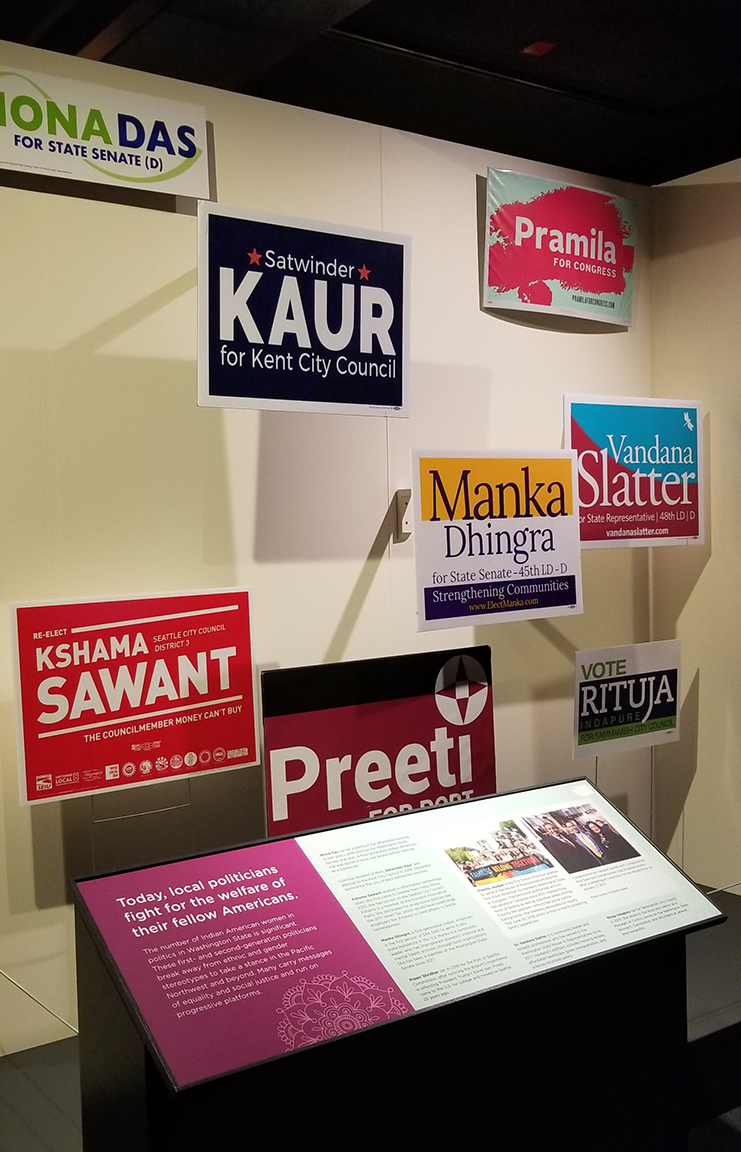 The Beyond Bollywood: Indian Americans Shape the Nation exhibition currently on display at MOHAI provides a window to the growing and increasingly diverse Indian diaspora in contemporary USA. While being a Smithsonian Institute Traveling Exhibition, this exhibition incorporates a unique regional perspective to tell a story of both Indians and Indian-Americans that are distinct to the Pacific Northwest. Housed in a museum that is devoted to telling a story of the PNW that encompasses both deep histories of the various local indigenous peoples to the role of local technological industries in the global economy, Beyond Bollywood adds yet another chapter to this narrative of the PNW as a dynamic region.

Beyond Bollywood was originally on display at the National Museum of Natural History at Washington D.C. and was aimed to provide a comprehensive overview of the contribution of Indians in USA. The current exhibition at MOHAI contains very few artifacts from the national exhibition – prominent amongst which is a heart-touching exhibit of an old small steel trunk containing a small Ganesh idol, a vinyl record featuring Indian classical music, and a few other knick-knacks brought in by an immigrant family that greets the visitors at the entrance. The rest of the exhibition contains artifacts, narratives and interviews that were painstakingly collected over a period of 1.5 years from community members in Washington state. This results in an exhibition that is visually interesting and breathtaking in its scope, and yet manages to provide a sense of intimacy to the audience.

How can one adequately capture the immensely complex and diverse stories of the Indian diaspora, comprising of people from very different regions, ethnicity, religious backgrounds, professional engagements and immigration histories? This is the main challenge that Dr. Amy Bhatt, the curator had faced, and she rose up to it.

Entering the exhibition, one is greeted with a series of both archival and contemporary photographs that tells us that Indians have been engaging in interracial marriages for a very long time. Another wall features black and white photographs of Indian immigrants who had formed the Ghadar party in the USA – one of the first political organizations that was formed to fight British colonialism in India. A timeline tells us the long and diverse histories of Indian immigration, specific to the PNW region. However, a display of old newspaper articles about many anti-Indian riots against immigrant lumber-mill workers in places like Bellingham during 1907 reminds one of similar anti-immigrant sentiments that many other immigrant working class communities had faced around the same time in this area.

The most eye-catching display in the room, however, is the interactive ‘sari wall’ that delights both young and old. The ‘wall’ features 12 colorful saris hanging tall from pegs, each from a different region of India with different embroidery and weaving styles, all collected from members of the Indian diaspora around Seattle. An interactive screen informs the visitors the specific regions each of these saris represents, along with short videos that show various regional styles of draping a sari. As Dr. Bhatt told me in an interview, this sari wall was designed to not only inform people of regional cultural diversity, but also to represent the diverse Indian communities that live in this region.

As a feminist scholar, Dr. Bhatt also sought to interject non-traditional voices from the local community by featuring activist organizations, academics and researchers engaged in innovative work, and individual narratives that complicate the Indian story in the region. The exhibition prominently features the wedding saris of Vega Subramaniam and Mala Nagarajan who had the first Hindu same-sex marriage ceremony in the PNW. The exhibition juxtaposes national data about the role of Indians in the healthcare sector with photographs of regional healthcare professions from Washington who had been engaged in reshaping the healthcare profession through their innovative work.

Along with photographs and artifacts from regional cultural institutions such as the Bothell Hindu temple and the Gurudwara in Kent that ground the community, the exhibition showcases activist organizations like API Chaya that works on domestic abuse in the South Asian and Pacific Islander communities, Trikone Northwest that gives a home to South Asian LBGTQ community, and Tasveer that brings in social-justice oriented films from South Asia to the greater Seattle community.

Regular MOHAI visitors interested in the economic history of the PNW will particularly find the section on Work and Economics interesting. A small green plastic sifter reminds the visitors of the long history of Indian farmers in the region. As one looks around, one sees photographs from the first Indian-owned food packaging facilities in the region, a business that was started by a family-owned farms when their fresh produce was refused by many retailers presumably due to anti-immigrant sentiments.

Another wall presents infographics on the rapidly rising number of Indians in the PNW, a population of mostly H-IB (or temporary employment-based visas) IT sector workers, that dramatically rose in the last decade. A set of vibrant photographs of Indian workers celebrating Holi (a Spring-time festival of colors) in the Amazon headquarters in Seattle, or a group of Indian people rejoicing together while watching cricket in a cafeteria in the Microsoft Headquarters in Redmond tells us the joyful ways in which this diasporic community curves out spaces for themselves in corporate America.

On a personal note, Dr. Bhatt confided that her favorite is the exhibit featuring almost a dozen political yard signs that represent Indian-American women running for public officers, ranging from local seats to the national congress. Indeed, the Indian diaspora comprises of divergent voices that now increasingly seek to shape national level narratives about politics and economics, while also deeply drawing from shared cultural identities and evolving relationships with the homeland. Beyond Bollywood does a good job of capturing the essence of this diversity and leaves its audiences curious for more.

Beyond Bollywood will be on display at MOHAI through January 26th, 2020.