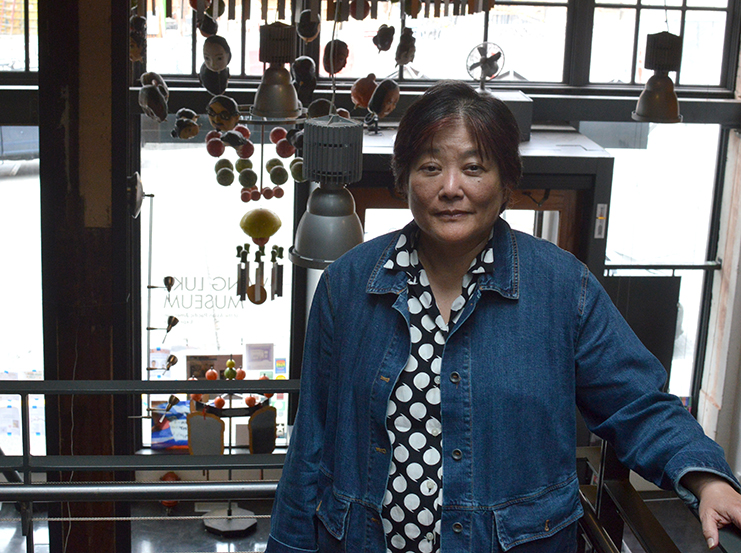 After 24 years working at the Wing Luke Museum, 14 of them as executive director, Beth Takekawa feels it’s the right time to retire.

The museum will launch a national search for a new director. Meanwhile, deputy director Cassie Chinn will fill Takekawa’s shoes starting in August.

“You’re talking about quite a long period of time in which she invested her heart and soul into maintaining and turning the museum over,” said Ron Chew, who was director of the Wing before Takekawa. “If anything else, her stamina is absolutely incredible, because that museum work, it doesn’t pay a lot, it takes a lot out of you, and it’s hard, hard work.”

Takekawa took an indirect path to leading the Wing.

Both of Takekawa’s parents were born in the Seattle area. Because they were yanked from their roots by wartime incarceration of Japanese Americans, Takekawa grew up in Minneapolis.

Her father, Yukata “Dutch” Takekawa, grew up in Seattle. When WWII began, he was sent to Camp Minidoka along with his brothers and widowed mother, who taught in the Japanese Language School in Seattle. Afterward, the family saw scant prospects for work in Seattle due to discrimination against Japanese Americans, so after a stint in the army, her father moved his family to Minneapolis.

Takekawa’s mother, Rae Matsuoka, grew up in a Japanese American farm family in the Bellevue area. The family was sent to Camp Tulelake during the war. Seeking escape, her grandfather signed the family up to work as migrant workers in the sugar beet fields in Montana. The family settled there, and eventually Takekawa’s mother migrated to Minneapolis.

Takekawa grew up in Minneapolis in a family that honored Japanese culture — though it was challenging without a large community there.

Takekawa initially studied cello performance, but left it to pursue other interests.

Takekawa returned to Seattle when she and her husband Tony To flew out for a vacation at Mt. Rainier. Driving across the bridge from Seattle to Bellevue, Rainier loomed on the horizon. It was the beginning of a plan.

When the couple moved to Seattle three years later, it was the first time Takekawa lived near extended family.

She learned about the Wing Luke Museum during her first job in Seattle, working for activist and journalist Sharon Maeda in a media firm in the former Nippon Kan theater building.

Talk of meetings in the Wing Luke basement piqued her interest. Chew, the museum’s director, had asked a group of Japanese American community members to design an exhibit commemorating the 50-year anniversary of the incarceration of Japanese Americans during WWII.

The group gathered together stories and materials about incarceration. “People would dig things out of their basements and bring these items from their incarceration experience,” Takekawa said. The idea surprised and captivated her. “I just said, I want to be there. I want to be in that basement,” she said.

“I knew that whereas my parents were pretty outspoken about their WWII experiences, the community as a whole was not,” she said. “That’s why a lot of families, their kids my age and the younger ones even, they never knew anything about the whole incarceration experience.”

Takekawa joined the exhibit committee, which is still the model for how the Wing develops its exhibits: With the guidance of community members, rather than professional curators.

It marked a shift for the museum, from showcasing Asian folk art to the stories of the pan-Asian American community. The Wing’s approach would resound nationally and internationally.

“It’s one of the things that kind of kept me here all these years,” Takekawa said. “Here was this place where it kind of validates what happened to you, and it’s in your point of view. And that’s just so rare, to be speaking from the inside as opposed to being talked about.”

Takekawa’s own parents provided materials for the exhibit. “I got to know my parents a lot more by participating in that exhibit, and I feel like that happens a lot with the process that the Wing uses, to this day.”

“She was an early volunteer, very dogged, very passionate about the issue,” said Chew. “I was thoroughly impressed, as was everybody else.”

The exhibit opened in February 1992, drew acclaim from the community, and “saved the Wing Luke Museum from its financial hole,” said Ron Chew.

When Chew started planning to move the museum to a new space, he offered Takekawa a job at the museum as associate director. She accepted, leaving her job at the Seattle Housing Authority and taking a pay cut.

As he writes in his memoir, My Unforgotten Seattle, much of Chew’s tenure as director of the Wing was focused on managing an ambitious and ultimately successful $23.2 million dollar capital campaign to remodel the historic East Kong Yick Building. With his schedule full, Takekawa managed the budget and staff, while Chinn worked on program development, exhibits and public programs.

When the capital campaign succeeded, Chew retired. As the new museum opened its doors, Takekawa took his place as director. And the 2008 recession hit. “It was quite a time,” Takekawa said.

“Her first big task was moving from a tiny auto-garage into a three-story building that was multiple times the size and staffing it up and just overseeing the evolution and the growth into the current space,” said Ellen Ferguson, co-president of the Wing Luke board. “That’s just a huge overall legacy.”

This was no easy task. “How do you sustain this operation that you’ve built?” said Chew. “You did the brick and mortar, but then what happens inside the institution, how are you able to generate revenue, stay in the public interest, make the new institution you created a viable proposition? That would be Beth’s legacy.”

When she started, Takekawa felt inspired by the new possibilities of the museum. “Suddenly your horizon is just different,” she said. “We had this sudden, immense place that had such meaning. Every little corner that you go into, you can feel the lives that were there.”

Takekawa helped increase the museum’s sales revenues, and focused on soliciting philanthropic giving from the community. That way, the museum wouldn’t depend on grants — and would become “an extension of everybody in the community and their lives and their power.”

Chrissy Shimizu, deputy director of Puget Sound Sage, joined the Wing in 2017, working as director of individual giving. She helped Takekawa steward relationships with donors in the community. “The depth of investment in the Wing is really rare,” said Shimizu. Shimizu was struck by the care Takekawa took in her relationships with the CID community.

The museum became intentional about partnering with CID businesses, offering walking tours and other programing, and becoming an economic driver for the neighborhood.

The Wing offers a tour of neighborhood locations from the novel Hotel on the Corner of Bitter and Sweet by Jamie Ford. Ford, who lives in Montana and visits Seattle frequently, serves on the Wing’s Board.

The Wing is “an anchor for the community,” said Ford, a place where people of Asian and Pacific Islander heritage can celebrate their stories, and where others can learn.

“To have such sizable, beautifully designed, fresh, current exhibits in that space, it wouldn’t have happened without Beth,” Ford said. “It takes a lot of leadership, it takes a lot of fundraising, it takes a lot of hiring the right people, and then managing the day to day as well as the crises. She’s kind of the total package.”

During Takekawa’s tenure, the museum became an Affiliated Area of the National Park Service. At the end of the Obama administration, Takekawa was asked to serve on the National Museum and Library Services Board.

Takekawa had “a big deal job,” said Ferguson, and was often invited to be on national panels and work with national funders. “I think of Beth as a humble servant leader. She always puts the community first, the staff first, the board, and she is pretty ego-free in her leadership.”

“She really gave her whole self to the museum,” said Diane Sugimura, co-vice president of the Wing board.

“She is a very strategic leader, and she never allowed her head to stray too far away from her heart,” said Shimizu. “She believes that everyone has a really interesting, really powerful story to tell….I think that is part of her superpower.”

Takekawa isn’t sure what she will do next in retirement, but she will continue volunteering with the museum. “I just feel lucky that I have worked in this place for all these years,” Takekawa said. “It’s never been boring.”

“I’ve seen the Wing become a point of pride for an entire community,” she said. No matter what happened, whether expansion or pandemic, the Wing “always was in touch with its heart and always had a good handle on what the soul of the community is,” she said. “It provides a home for all.”

The museum is in a good place. “The fact that she has created that kind of knowledgeable, caring, bright, very capable staff makes me feel much more comfortable about the fact that she will be retiring,” said Sugimura.

“She’s left the museum in such a strong position both organizationally with staff, board, and now financially,” Ferguson said. “It’s a great time for the next leader.”

Ferguson and others are setting up a committee that will search for the museum’s next executive director. There is no job description yet.

“It’s got to be someone who’s attuned to a community-based museum, ideally experienced in the AAPI community and has a strategic vision for that next leap forward,” Ferguson continued.

Takekawa noticed that “each time the director changed, which is not very many times, there was a leap that the museum took.” She believes national recognition was her legacy. “I’m so excited that the museum will leap again, and I don’t know what it’s going to be, but it will be with the next director.”