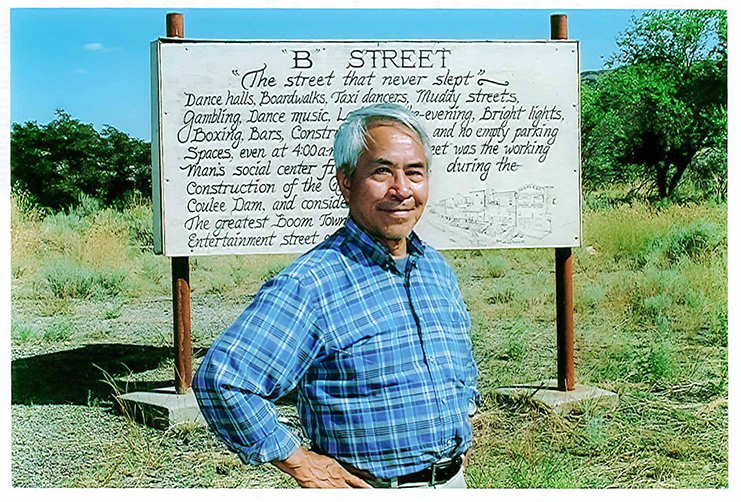 Seattle Native American artist and writer Lawney Reyes, who documented his family saga and his tribe’s forgotten history in “White Grizzly Bear’s Legacy: Learning to Be Indian,” passed away on August 10 at the age of 91.

Reyes, a longtime Beacon Hill resident, worked for decades as a sculptor, interior designer, architect and writer until his passing last week. He was inspired by his mother’s tribal stories and the heritage of his immigrant Filipino father. The homeland of his mother’s tribe—the Sin-Aikst or Lakes tribe—was obliterated after construction of the Grand Coulee Dam in the 1930s. The tribe is now one of the Confederated Tribes of the Colville Reservation.

Reyes was born in Bend, Oregon on May 13, 1931. He attended Chemawa Indian School in Oregon and attended the University of Washington, studying sculpture, painting and interior design. He graduated in 1959. He worked as art director at Seafirst Corporation, curating the corporate art collection. His artwork is held in numerous collections in Europe, Asia and the U.S.

At the time of his death, Reyes was working with International Community Health Services on a bronze cast of his iconic grizzly bear sculpture, which will be installed as part of a permanent art installation in a new senior care facility on North Beacon Hill, scheduled to be completed in 2024.

Lawney’s mother, Mary Christian Hall Wong had a huge influence on Lawney. She was a fabled storyteller who took great care to preserve family and tribal history by taping interviews and keeping diaries. Her notes provided abundant detail for Reyes’s books. She had intended to write a memoir, but her life was cut short when she was killed in a car crash on Memorial Day in 1978. After her death, Reyes patiently devoured her papers and listened to her cassette tapes. In 1984, he took early retirement from Seafirst Corporation to pursue art.

Lawney’s younger siblings—Teresa Wong, Laura Wong-Whitebear and Harry Wong Jr.—recall that when they were growing up in Tacoma, Lawney was a steadfast presence, even though he was a parent, holding down two jobs in Seattle.

“Lawney was very busy, but he always found time to drive to Tacoma regularly and check on all of us and see how we were doing,” Teresa said. “As a young child, one of my favorite memories of Lawney was him playing his ukulele and singing. He was a tenor in college chorus and would sing songs such as ‘I’ve Been Working on the Railroad.’ He said funny things like ‘Who knows, but the nose knows.’ When our sister Laura wouldn’t finish her meal, he would tell her, ‘The shrimp boat will get you.’”

Laura remarked, “He was such a health nut. He wouldn’t let me leave the table unless I ate my vegetables.  But I didn’t want to eat the frozen peas and carrots and canned spinach. I remember being the only one at the table and falling asleep. My sister-in-law Joyce was my savior. She sat next to me with a napkin. Throughout the years, Lawney would give health tips. Whatever unhealthy food we ate, he would say, ‘That will give you cancer.’

“When we were in grade school, Lawney taught the three of us to play poker. We bet toothpicks.  He let us win at first, but in the end, when the winner takes all, he won.”
She said that Lawney was always eager to get honest feedback on his artistic creations. “When he was making something,” she said, “he would bring it into the living room and ask each of us what we thought. At the time, I was in grade school. I didn’t know anything about coastal art. I would say, ‘What is that?’ That didn’t bother him. He believed that young people have a natural instinct for art.”

Laura, a member of the Northwest Native American Basketweavers Association, said she later adopted the same attitude with her own grandchildren, soliciting feedback, despite their youth.

Following the surprising success of “White Grizzly Bear’s Legacy,” published by University of Washington Press in 2002, Lawney fully embraced his newfound talents as a writer. His third book, “B Street: The Notorious Playground of Coulee Dam,” published in 2008, weaves stories from his mother’s diaries and his vivid childhood memories of the bustling street of shops and hotels and eateries in the town of Inchelium where the family grew up. “B Street” inspired the PBS documentary, “The Grand Coulee Dam.”

Lawney’s final book, “A Tribal Manifesto,” featured brief biographies of 44 historical figures—local, national and international—who “have made a significant impact on the lives of others.” Their stories, Reyes writes, “reflect the motives the red man has developed in answering the white man’s philosophy of Manifest Destiny.” The book was completed in 2020.

Earlier this year, Daybreak Star Cultural Center featured an exhibition of Reyes’s work. The Center also has on permanent view Lawney’s 30-foot long “Blue Jay” sculpture, previously at the Bank of California in downtown Seattle for over 30 years.

Lawney’s sister Teresa said she will miss meeting her brother for coffee at Fresh Flours on Beacon Hill. “Because there was 16 years between Lawney and I, these conversations brought new discoveries of him,” she said. “I discovered that he was quite sociable. Lawney enjoyed reminiscing, telling stories about friends and family. He took such pride in his four grandchildren.”

A memorial will be held to remember the life of Lawney at Daybreak Star Indian Center on Friday, August 26 from 4 to 10 p.m. The event is open to the public.