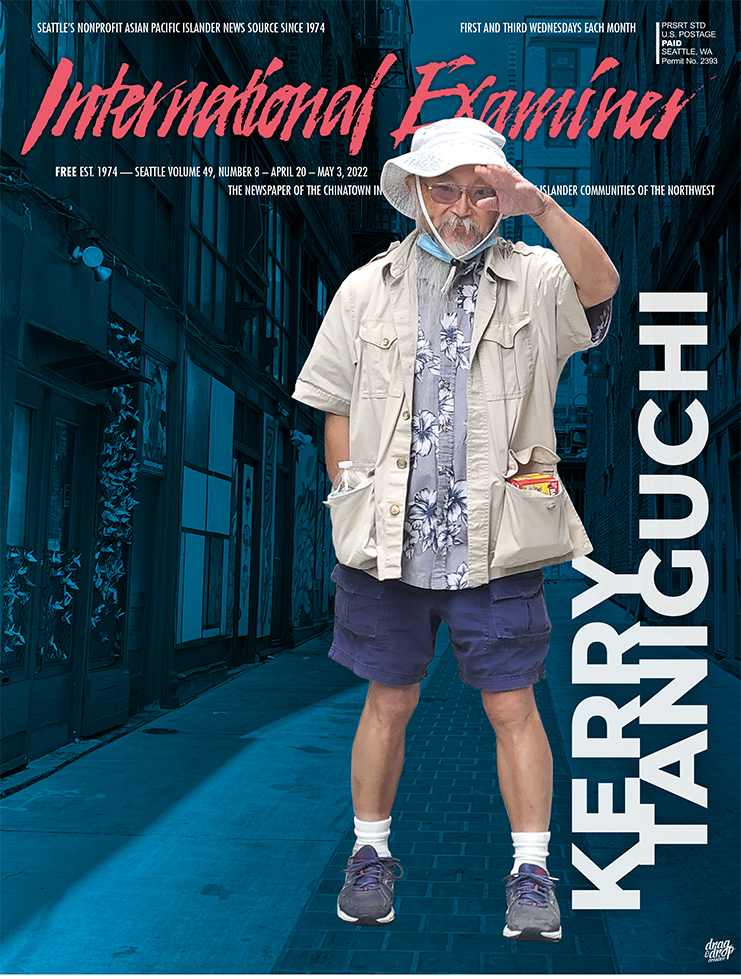 Seattle native Kerry Taniguchi, beloved Santa and Chinatown-ID (CID) icon, died in his sleep at his Renton home earlier this month at the age of 67.

Taniguchi was a familiar presence on the streets of Chinatown. He was a diminutive figure with a long-wispy gray beard, wide-brimmed bucket cap, shades and pocketed vest. He would mosey along, pausing to gossip with friends, old and new. He relished sharing fondly-remembered details about the area’s past with young activists.

Taniguchi, born on May 11, 1954, attended Bailey Gatzert Elementary School, Washington Junior High and Franklin High School. His parents, Hitoshi and Taeko Taniguchi, operated the Publix Hotel in the CID, which ignited a lifelong passion for the neighborhood.

After attending Bellevue Community College, Kerry enlisted in the Army, leaving with a medical discharge. He then worked at the Chevron gas station on Rainier Ave. S. and McClellan. At the Chevron Corporation, he taught first aid to service station employees in Washington and Oregon. In the mid-1970s, one Chevron station attendant used this training to assist a head-on crash victim near his station in Oregon.

Taniguchi had a boundless giving spirit. His younger brother Harold recalled, “For four years, I drove my car to and from Southern California for school, not to mention taking trips off campus. Kerry gave me a Chevron credit card and paid my bills without question the entire time!”

Kerry worked for several years at King County for the Roads Services Division as a Road Use Investigator. He was a King County volunteer fire fighter and reserve officer. He provided numerous first aid training sessions and addressed facility and security issues at the Nisei Veterans Memorial Hall and the White River Buddhist Church.

In 1976, Taniguchi began volunteering at the International District Emergency Center (IDEC). Following his retirement as a King County Sheriff, he became IDEC’s primary trainer for first aid and emergency preparedness. He was a close friend of founder and director Donnie Chin, tragically killed in the summer of 2015 during the crossfire between rival gangs.

“Kerry singlehandedly trained CID residents, businesses and regular visitors on the skills of first aid following Donnie’s death when the board realized it could no longer support 24-hour patrols and response to emergencies with Donnie gone,” said Richard Mar, former IDEC board president. Last year, Taniguchi joined the IDEC board of directors.

During holiday season, Taniguchi cheerfully dressed up as Santa Claus at the Wing Luke Museum and at Tai Tung, sitting for photographs and handing out fortune cookies and candy to children.

“He was definitely beloved by us and the staff,” Vivian Chan, Wing Luke Museum community programs manager recalled. “We didn’t really see him as much at the museum till after Donnie’s death. After that time, he was often found chitchatting with our front desk staff, often and at length. He had a list of chosen grandnieces and grandnephews. It was almost near 20 the last time I checked.

“My kid was a great grandniece. He lovingly purchased a large number of cookies from her. He always wanted to out-purchase her grandmother. He always told me he didn’t eat all of them, but mailed them off to his friend’s kids in the military.”

Auriza Ugalino, community relations manager at the International Examiner, said “Grandpa Kerry” made the community a “much safer, happier place.” He came to Ugalino’s assistance after they had suffered a chemical burn while trying to clean graffiti off a newspaper box.

“He taught me how to take care of my wound by dipping it in a bowl of water for 15 minutes,” they recounted. “While my hand was soaking, he did a safety inspection of our office and found that both our first aid kits and fire extinguisher were expired. Now we have safer protocols at the office.”

Jaime Stroble, former program manager of Wilderness Inner-City Leadership Development (WILD) at InterIm CDA, a youth empowerment and wilderness program, said she first met “Uncle Kerry” seven years ago when he dropped by her office in the International District.

“He would teasingly call me ‘Obaasan’ and bow with respect once he found out I was Japanese,” she said. “I laughed at how I should be the one bowing to him as my elder, but he loved to joke around and flip the expectation of respecting your elders to show his appreciation for the younger generation of people working in the neighborhood. He was no nonsense and full of nonsense at the same time. He was a well-loved character, and he will be missed.”

Taniguchi’s Chinatown visits were never complete without a meal at Tai Tung. He always sat at the same table, choosing one of three staples; pork noodles, crab rangoon or Tai Tung Special Chow Mein. He insisted on “no vegetables” and a can of Sprite. Brother Harold confirmed Kerry’s lifelong aversion to vegetables.

“The restaurant—it’s just like another home for him,” owner Harry Chan recalled, deep sadness in his voice. Kerry’s table is adorned with pictures, flowers and cards from daily grieving visitors. “Everybody here knows him. Sometimes he comes twice a day. He was a very generous person. The kitchen staff—they don’t know his name, but they call him ‘the corn man’ because he brought in boxes of corn and gave it to them.”

Chan said he had been looking forward to traveling with Taniguchi in September to visit three Japanese American concentration camps sites—two in California and one in Arizonia. He said Kerry accompanied him on earlier trips to Minidoka, Topaz and Camp Amache, opening his eyes to that history.

On March 11, despite his frail health, Taniguchi led IDEC’s volunteer efforts at the Wing Luke Museum’s annual art action at the Sheraton Hotel in downtown Seattle.

Mar added, “Last December, barely out of the hospital, he donned his red suit and fulfilled his commitment to Harry Chan at Tai Tung to perform his infamous Santa Claus for the kids.”

Chan noted that the afternoon before Taniguchi died, he stopped by the restaurant to pick up an order of food: “He looked okay to me, but I asked him, ‘Hey Kerry, you better go back to the car and get your cane.’ He said, no, he doesn’t need it. The next morning, Melvin called me and told me that Kerry had passed away.”

Coincidentally, Chan said, that same morning, all the track lights on the lower level of the restaurant failed. “We were joking that maybe Kerry’s still here with us,” Chan said.

Taniguchi made annual trips to Disneyland with his family. Without fail, he made weekly visits to his father’s gravesite and to see his 97-year-old mother every Tuesday, bringing treats from Uwajimaya.

IDEC is working with other CID partners to organize an event to remember Taniguchi on May 7.

This article originally posted on April 11 and has been updated.