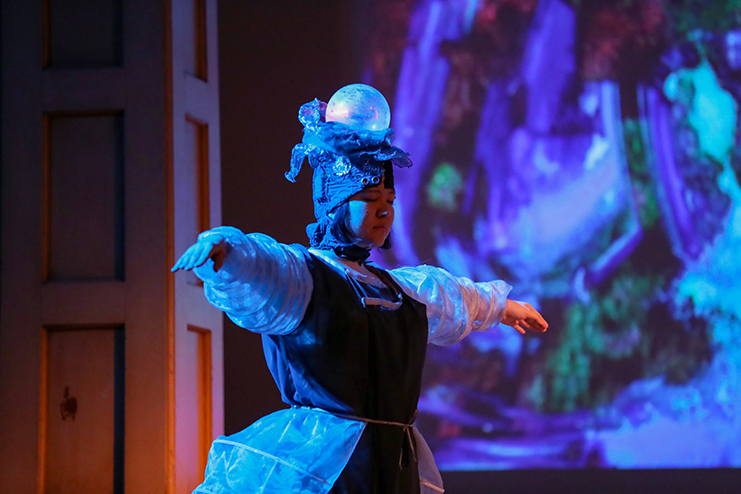 Crosscut recently elucidated the controversy at the 2019 Bellwether Festival in Bellevue over the erasure of descriptions of anti-Japanese history in the work of some of the featured artists. One of those artists, Erin Shigaki, released a statement about her experience.  All totaled, the Bellwether Festival presented work by over 40 artists, selected by nine curators, at four locations in downtown Bellevue, including 19 events over a period of 10 days from September 13 to 22, 2019. The artists reveal a wide range of experience with the 2019 festival.

One artist, Garima Thakur, presented a work entitled “I Am An Alien,” at Bellevue City Hall. “Walking for a minute into the City Hall past the glass doors straight ahead, on your right [you see] on an orange terracotta wall, a computer station positioned below a 15-feet by 10-feet blood red, thick cotton, canvas flag with the word ‘inalienable’ on a background of a redacted I-797 form,” Thakur described. “The work station contains eleven table flags and a computer with a hypertext game called I Am An Alien.”

Creating empathy is Thakur’s objective. “My goal for the work was to situate the viewer in a position of an alien, an immigrant status as an alien allowed to work,” she said. “The work is subverted as a fake immigration officer table. Very much like the immigration process, the website is broken in parts, with links that can’t be clicked or take time to load.”

She views the editing process, deemed censorship by Erin Shigaki and others, as occurring more broadly than in just the Bellwether Festival. “The art world, like any other world, imitates some part of the world we live in:  boxes within boxes, patriarchy, class, capital, race, gender biases, white supremacy and many other layered forms of biases,” Thakur said. “It is a world where idiosyncrasies, fantastical spectacles, abject juxtapositions make profit.”

Thakur feels that artists face difficult dilemmas in this context. “We live in a space of silencing people who are speaking their truth,” she said. “It sucks that, most times, it becomes hard to work with institutions as artists, and I wish we could find ways to side step it, because I am a pessimist and don’t believe that institutions will step up unless people in power shift and change.”

Artist Chanhee Choi agrees. “It’s common for conflict and struggles at art shows because all organizers have differences and artists prefer not making trouble,” said Choi, who also spells her first name Chanee. “Most times, the artist has no freedom from the organizers of the show unless the show is made by artists themselves, or by famous artists.”

Choi presented her installation and performance work “Polaris” at the Bellevue Arts Museum and Bellevue City Hall.  “Polaris is inspired by starlight and our existence in the universe,” Choi said. “We have a signal within us that we can use to communicate with other worlds.”

She encourages her viewers to think of this communication as multi-sensory. “Our signal connects us to the universe, and could be something we can see, feel, or touch,” she said. “The Introspective signal that connects all of us might be in dead zone temporarily, but like footsteps echoing in a cave, your movements through ‘Polaris’ will be echoed in the light it shines as it reacts to your presence.”

Choi did not have the same experience of editing or censorship as other Bellwether artists, but recognizes the power dynamics at play. “The Bellwether Festival was from the city of Bellevue, which means they have certain politics, so they have more restrictions potentially on the artist,” she said. “I’m not sure if I can call it ‘whitewashing,’ but I agree that there were absurd things happening to Erin Shigaki that were not the way to respect her work.”

Likewise, artist Tuan Nguyen, whose work investigates issues of identity and displacement within America’s cultural landscape, had no direct experience of censorship during the festival, but was willing to share his thoughts. “I only heard about Erin Shigaki’s, and the other artists’, conflict after the fact and was disheartened to say the least,” Nguyen said. “I think the city and organizers could have done a better job of creating an adequate space to address this very difficult history.”

neatly anywhere, and for what I want to see manifested.”

In addition to being frustrated by some logistical challenges concerning display locations and viewing hours, Nguyen expressed disappointment regarding the limitations placed on artistic expression. “There wasn’t a space created for reconciliation or healing that I was aware of,” he said. “Instead, it appears the immediate impulse was to suppress controversial issues, which seems to have backfired. If art cannot be the space for this, then what is the point?”

All three artists have now moved on from last Fall’s Bellwether Festival and are now immersed in efforts to create work during the current Covid-19 pandemic. “The main challenge is how not to be jaded by the performance of the art world while making art that comes from deep within,” Thakur said.

Nguyen encounters a similar struggle. “The market and collectors tend to favor art as monetary investments, rather than art as cultural investments,” he said. “It’s hard to get support as an emerging or under-represented artist to do ambitious projects that will catapult your career and help reach ‘escape velocity.’ I work a day job and do okay with little sleep.”

During this time, Choi is creating ‘Pandemic 2020,’ a first-person 3D video game in which the player is a Covid-19 virus within a virtual environment, and is using this game to track incidents of discrimination, xenophobia, racism, and violence against Asian Americans during the 2020 Covid-19 pandemic. “We don’t yet know how this pandemic will end up affecting the world’s economy, the relationships between nations, or politics within the United States,” Choi said. “We are being reminded that as human beings we are very fragile, and in our desire to feel strong, throughout our history, we have used scapegoating as a mechanism for catharsis and in-group bonding.”

Choi’s work is an example of the special pressure that many artists feel to go beyond mere day-to-day survival in difficult times. “There is an expectation from artists to produce when the world is falling apart, to be creative, to share, to document the fantasy of the apocalypse, narrate the fallacy creatively, be a cultural producer,” Thakur said. “And maybe that is the function of the artist.”

Nguyen shares a similar perspective.  “I’m reclaiming my commuting time as studio time,” he said.  “I’m considering this time as a gestation period. We will be back.”