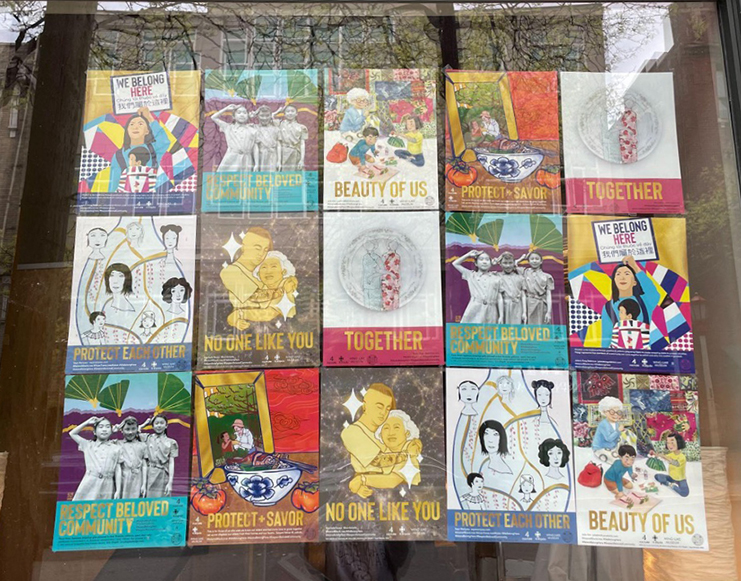 Vibrant and colorful posters featuring the artwork of local Asian American Seattle women artists will be hanging on art gallery windows of 4Culture in Pioneer Square, Wing Luke Museum, Inscape Arts & Cultural Center, as well as on storefronts throughout Seattle and the International Chinatown District. The posters have slogans of “Together,” “Protect each other” and “Respect our beloved community” on them.

The campaign’s goal is to end violence against the Asian community due to the racist rhetoric against Asians and Asian Americans during the COVID-19 pandemic using the artwork of local Asian American artists. It was also created to beautify streetscapes and uplift Seattle’s Asian American community.

“The plan was to try to bring in other AANHPI women artists we knew at a hard time in the economy for artists and for other working people,” Erin Shigaki, co-campaign head and artist said.

Juliana Kang Robinson, co-campaign head and artist said that it was frustrating to see a lack of ways for artists to express themselves surrounding the topic of anti-Asian violence and hatred. Kang Robinson and Shigaki said they felt disappointed by some of the efforts that more artists of color were not incorporated into anti-hate campaigns.

“We envisioned having a lot of these posters in neighborhoods in Seattle that had a high population of Asian Americans like the CID, U District and especially putting them in the storefronts of businesses because we know that a lot of those businesses were being vandalized and targeted,” Kang Robinson said.

Shigaki said she and Kang Robinson received a grant for this project from 4Culture, a Seattle arts and culture resource that looks to promote cultural work to make King County vibrant. From there, Kang Robinson and Shigaki reached out to local Asian and Asian American artists to become part of the campaign.

The Wing Luke Museum and the Seattle Chinatown International District Preservation and Development Authority (SCIDpda) were community partners in the campaign. They aided in the early process of applying for grants, spreading the word through their channels and posting digital versions of the posters on their websites alongside resources for anti-Asian violence and xenophobia.

The Seattle Office of Arts & Culture also awarded a grant to Shigaki and Kang Robinson with the intention to support projects that reach underserved artists and communities.

“This project addressed all of these priorities by providing opportunities to artists who were impacted through the pandemic, as well as combatting the increase in anti-Asian violence that has taken place during that time,” April Jingco, Seattle Office of Arts & Culture communications specialist wrote in an email.

Each of the posters have different stories that feature each of the artist’s individual styles.

Shigaki does a lot of work centering on the incarceration of Japanese Americans during World War II. Her poster features three girls who were incarcerated from Bainbridge Island when they were very young. The image is 10 years later after they’ve returned to the island wearing their uniforms, happy and proud to be back.

“I wanted to put forward a really hopeful image that also has a lot of historic context,” Shigaki said.

There is a cohesiveness to the vibrant colors throughout the posters that showcase the beauty of difference and unity. As the graphic designer, Shigaki said artists had free reign to showcase their art but added a hint of gold in every poster and included text.

Shigaki said this was intended “to speak to the richness of our community and the fact that we’re a really vibrant, multifaceted group of folks.”

Kang Robinson’s poster features a Korean mother holding a sign that says “We belong here” in English, Viet and Mandarin Chinese. The mother is also carrying a baby who Kang Robinson said is a combination of her son and daughter in a pojagi – a Korean quilt that is used to carry valuables.

Kang Robinson said she used pattern play in the wrapping cloth to show how a community can come together and carry one another.

“I also incorporated the intergenerational element that we see in this fight,” Kang Robinson said.

Shigaki and Kang Robinson received positive support from the community and plan to give out more posters at schools and events in the summer like the Wing Luke Museum Jam Fest, the SCIDpda Bash and Hai Japantown.

Kang Robinson had given posters to an art school in Redmond and one of the students told her she was grateful for the project.

“She said that since the start of the pandemic, people have come up to her and said really awful things to her at her school,” Kang Robinson said. “It made her really happy to be able to take these posters back to her school.”

Saya Moriyasu is another artist that collaborated in the campaign. She said she received a grant which was originally meant for her to travel to Japan and teach Shoreline students. Each time she thought of teaching, a new COVID strain appeared. 4Culture allowed Moriyasu to use the grant to support this campaign instead.

“People have been really supportive and really love the poster project,” Moriyasu said. “They’re also impressed by the high quality of the printing and the design work and feeling more seen by having this imagery out there in the world.”

Moriyasu has done collaborations and installations, but this was her first time doing a poster project.

Her piece is based on portraits of ladies that she has focused her art work on periodically. The background features somewhat of a vase form to show an enclosing and enveloping, safe feeling. Shigaki’s addition of gold onto Moriyasu’s piece directly references kintsugi.

“That’s referencing kintsugi, which the Japanese use for ceramics to repair things, and then oftentimes the piece that’s repaired is kind of more precious and valuable than before it was repaired,” Moriyasu said. “So kind of talking about the community and healing and coming together and taking care of each other.”

Shigaki said alongside the smaller posters that are hung in various Seattle neighborhoods and storefronts, larger posters will be framed in different festivals, events and other places this summer.

“One of my goals always is to try to bring real stories into light, to bring our stories into the American narratives,” Shigaki said.