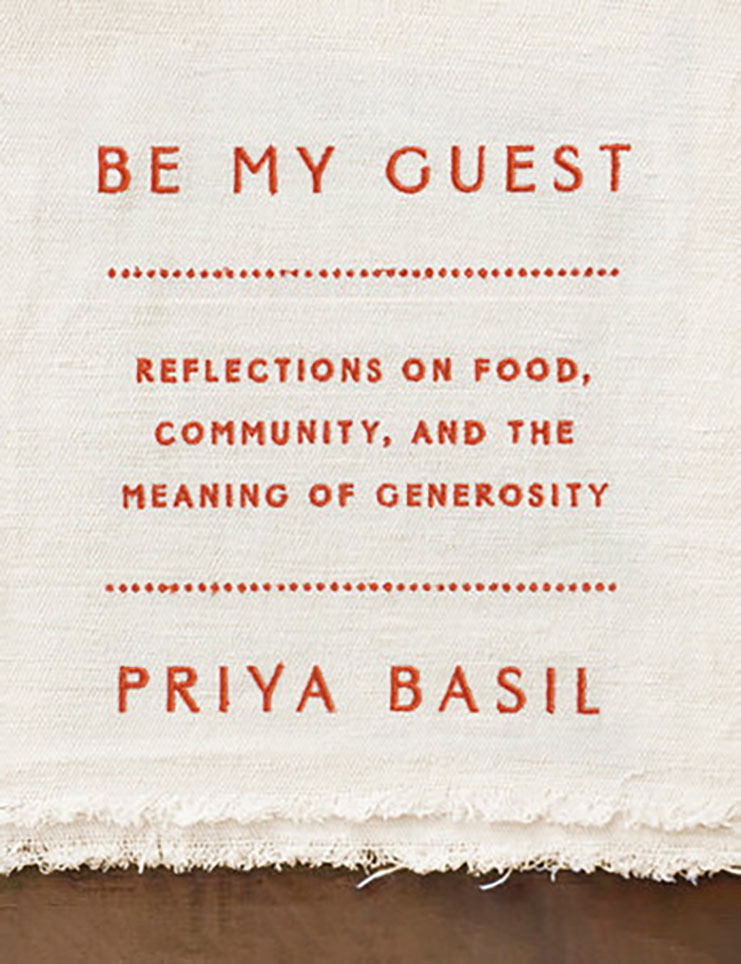 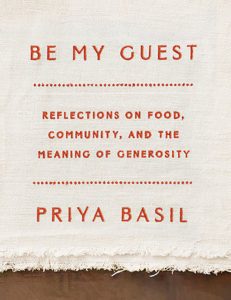 “We begin as guest, every single one of us,” opens Priya Basil’s latest book, Be My Guest, an allusion to life inside the womb. Basil’s book is part memoir, part meditation and a plea for how we might begin to think of ourselves in relation to others, especially those we assign as foreign and other. She writes movingly of the multiple dislocations experienced by her family and the prejudice they encountered, both within and outside the family, against the backdrop of amazing meals cooked and eaten.

The book explores the notion of hospitality — of inviting and being a guest — as inextricably linked with the pleasure of eating. Basil’s most cherished memories are of stuffing herself with the juiciest pieces of food prepared by her mother, or a relative, from the over-laden table at family gatherings. Sometimes she hid the choicest pieces to nibble on later. Even as an adult, she reveals that she has trouble sharing her favorite food in violation of the cultural precepts of her Sikh upbringing and the innate joy she feels in sharing a meal.

Basil writes that the shift from the first instance of guest-hood — floating in the womb and absorbing the nutrients a mother offers — morphs into the dependence of a child on a mother’s milk (or formula as the case may be). It is always an act of giving and receiving, and as such a reciprocal act of temporary dependency. She recounts that meals painstakingly cooked by her mother and mumji, her maternal grandmother, were a succor against the hostilities of newness experienced by these women, and others like them, who moved to live near their husband’s families, often leaving their own far away.

Born in London but raised in Kenya, Basil grew up surrounded by her father’s family in a wealthy enclave of Sikhs. Although affluent, their status was still below that of the white Kenyans who wielded power in society. Still, their privileged existence was in stark contrast to the poverty faced by black Kenyans. Her family, and other Sikh families like hers, didn’t have much interaction with black or white Kenyans.

Despite these social divisions, Basil recalls that everyone was united when it came to hastily gobbling the delicious street food cooked by poor, black Kenyans.

After her father’s business failed, Basil’s family was forced to return to the UK where she felt like an outsider because of her skin color. Later, the xenophobia stirred by the vote to leave the European Union and the open hostility Brexit unleashed sensitized her to the fate of those deemed different. The country she had come to love was becoming ever more inhospitable to people in search of education, work, and options. Basil wonders what the act of giving means when it is imposed on the giver. Sometimes there are hidden expectations, met and unmet, behind acts of generosity.

In her family, the sometimes double-edged nature of hospitality was expressed best by mumji, who wielded food like a weapon. She would force elaborate meals on family and friends and express hostility if they didn’t consume them in the quantities she felt showed the correct appreciation for her labors. Her relationship with papaji, Basil’s maternal grandfather, was also based on food. She fed him back to health as a young bride upon his completion of a brutal trek back to the ancestral village from Pakistan after he was inadvertently caught on the wrong side when India was partitioned by the British.

For mumji, marriage provided an escape from a youthful indiscretion that she hid from her husband, and she wanted to secure a ticket out of India, and her past. After moving to Kenya, she began a lifelong habit of cooking and feeding in abundance. She continued to cook multi-course delicacies for her husband even in retirement, all the while complaining about the self-imposed strain of creating elaborate meals from scratch. It was the only way she knew to use up her considerable energies, and the only legitimate work available to women of her class at that time.

Now a resident of Berlin, Basil feels most at home in her adopted city where she moved to permanently after marrying her German boyfriend. It was a marriage her mother opposed after learning he is white, much older and divorced. Basil struggles to understand her mother’s overwhelmingly generous nature against her preconceptions about what makes for a suitable husband. Even the most hospitable struggle to accept what flies in the face of their beliefs, although some will take a hard look at their prejudices and decide that it’s not really who they want to be. Basil’s mother eventually welcomes her son-in-law to her table as a beloved member of the family.

Basil admits that even her generosity has its limits. She experiences difficulty letting go of control as a host, insisting on what is served, how much is placed on each plate, and when it is eaten. She finally gives that up for buffet style meals where everyone makes their own choices as the most hospitable way of welcoming people into her home.

In Berlin, Basil becomes involved with Germans welcoming refugees to the country through meals cooked together as an alternative to the hostility expressed by those who felt the newcomers — through their food, language and beliefs — are destroying what it means to be German. If the last four years in the U.S. haven’t made it crushingly clear, fear of immigrants can be manipulated by demagogues until it poisons the air. They paint immigrants as seeking only to receive (aid, support, jobs) which is touted as a subtraction to society. In fact, immigrants give (labor, expertise, taxes) at sometimes great cost.

During COVID-19, when close proximity can result in terrifying consequences to our very breath, immigrants give generously as essential workers in the healthcare, food and retail industries. An absorbing read, Be My Guest unpacks what hospitality and generosity really means for community. It is worth adding to the stack on your bedside table.