In Pakistan, one way to become really good friends with people, jokes author Haroon K. Ullah, is to “eat three mangoes” with them. Ullah never realized that years worth of late night conversations with the Rezas, a middle-class family from Lahore, whilst “dripping all over” with the ridiculously messy fruit was part of the bargain when he embarked on his journey to Pakistan in 2004.

“I went with one idea to Pakistan and what I found was very different,” said Ullah, a Pakistani-American, who lived eight years in Pakistan to do research on U.S.-Pakistan relations and the military.

The result, The Bargain from the Bazaar: A Family’s Day of Reckoning in Lahore is a refreshing perspective on the current political situation in Pakistan through the eyes of the Reza parents and their three sons: Salman, Daniyal, and Kamran. It offers valuable insight into a country constantly on the news. While the public is inundated with notions like drones, Malala, and suicides attacks, few people have a grasp as to what they actually refer to, and more importantly how they shape the lives of average people, which makes The Bargain from the Bazaar timely and necessary reading.

The narrative begins during the conflict-riddled 1940s when Awais, the Reza family patriarch, is caught in the India-Pakistan Partition. As the nation recovers from war followed by years of military dictatorships, Awais returns to his tiny stall in the 300-year old Anarkali bazaar of Lahore. His business lags when violence in the city escalates. His wife, Shez, is a nurse who increasingly has to treat victims of suicide bombings. More critically, the fate of their three sons is affected by the volatile political climate. While the sons are raised in the same household and given the same set of values, Daniyal shows signs of allurement toward extremist groups who are seeking young recruits for suicide missions. The extremists’ goal is to weaken the credibility of the Pakistani government and its western allies—they also provide a sense of purpose for young people like Daniyal.

Weaved into Daniyal’s doom is the optimistic account of Kamran, a law student on a scholarship who ambitiously aspires to tackle the corruption rampant in the government and the unstable economic conditions spurred by inflation. Simultaneously, he is pursuing his love interest, a classmate from a higher social class whose parents oppose the match. He is forced to watch his dreams jeopardized due to senseless terrorist activity, which could possibly involve his own brother.

Despite the at times seemingly contrived dialogue, Ullah tells an enthralling tale, with well-developed characters, suspense, and climax. The insights offered are useful to everyone, from Pakistan policy analysts to those simply seeking a good, human story of resilience.

In an age when the public discourse on Pakistan is depthless, Ullah’s second book is at its core a story of young people seeking answers, not unlike young people anywhere else in the world. But, according to Ullah, youth in Pakistan—60 percent of the population, or over 100 million people, under the age of 30—are “at a crossroads.”

“They see the corruption; they see the lack of opportunity. Young people want an answer, and some of these extremist groups give a very comprehensive answer,” Ullah said. “A lot of people have this misperception that it’s the poor people being recruited into these extremist groups and my research actually says something quite different. It’s actually people from the middle-class, educated at university level with ideological and identity grievances.”

With their second son gravitating toward violent extremism (middle child syndrome perhaps?) the parents would ask Ullah if they did the right thing in raising their kids and if they had failed as parents.

“These are big questions they struggled with, and it’s not too unlike families I grew up with in blue collar, small-town America,” Ullah said. “And that’s what struck me was the similarities.”

Growing up in rural eastern Washington as one of the few people of South Asian heritage, Ullah remembers getting asked about what was going on in Pakistan, about the violence on the news and the U.S. flag burning often depicted. It’s a position many children of immigrants can relate to: concerned adults and curious peers asking questions about X country shown on the news that they’re parents are from, expecting them to be an expert on the political situation of the country. But like most ethnically diverse Americans raised in the U.S., Ullah didn’t have a good answer. 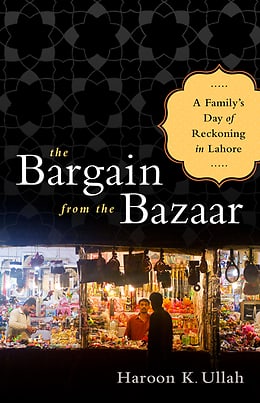 “But yet I wanted to be able to answer that. A part of me wanted to explain what it is we see on TV and to go beyond the headlines.” The author now serves as staff adviser to the U.S. State Department, focusing on public diplomacy and countering extremism. He was trained at Harvard University’s John F. Kennedy School of Government where he served as a Belfow fellow.

“There’s too much at stake for us to ignore,” said Ullah. “I’m cautiously optimistic. The reason I remain that way is because I have met a countless number of families like the Rezas who are against all odds looking for a better future. That’s the message to get across to people in America, because people feel a sort of animosity toward Pakistan. I always remind them that things won’t always be this bad.”

Back at the effervescent Anarkali bazaar, a potpourri of sights, sounds, and colors, characterized by Ullah as the great microcosm of Pakistan, serves as the central meeting point for everyone of all social, religious and age backgrounds. As the largest open air bazaar in South Asia, one can find “everything and anything” here and shoppers haggle until they score the best bargain they can, as they’ve done for centuries.

“The bargains in the bazaar represent something that is unexpected,” said Ullah. “The Rezas taught me about resilience and triumph and justice, but it wasn’t what I expected to find.”