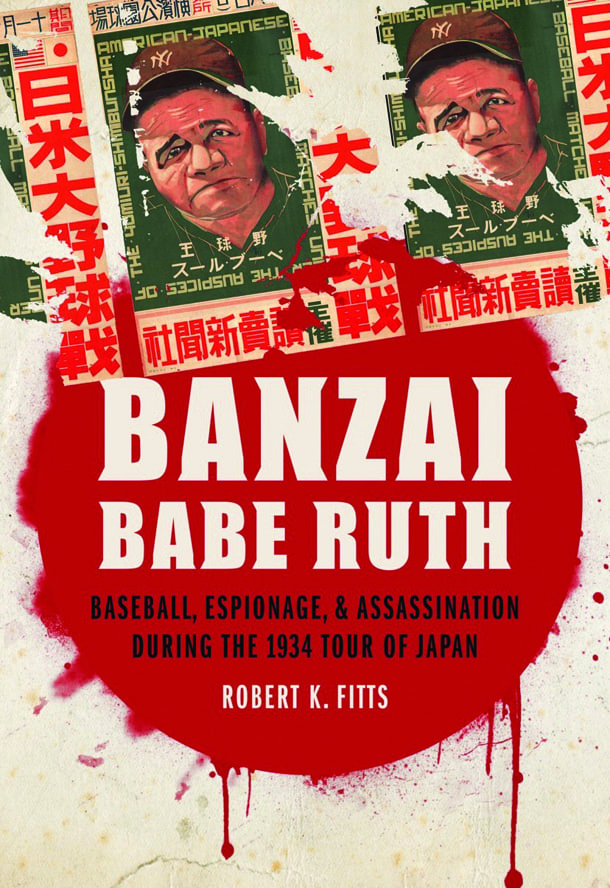 Perhaps far more influential than the 1992 Olympic “Dream Team” was an American all-star baseball team that barnstormed through Japan in 1934, which included Babe Ruth, Lou Gehrig, Jimmie Fitts, and the venerable Connie Mack. But the man who made this possible was not American, but Japanese.  Yomiuri newspaperman Satoro Suzuki, with a passion for baseball, pulled off the ultimate coup of this tour by doing the impossible—bringing Babe Ruth to Japan. With equal passion for Japanese baseball, Robert Fitts with Banzai Babe Ruth, shares a story that transcends this amazing baseball tour into something more, which is in itself is remarkable.

It’s 1934, and as the American greats play games throughout Japan, goodwill is being spread all around. The Japanese spread out the ultimate welcome mat with lavish events and banquets everywhere the Americans go. Japanese fans by the thousands crowd the streets and stadiums not only to cheer on the Japanese all stars, but even more for the Babe. In America, the sheen of the overweight and unfit Ruth has worn dull in the autumn of his career, but in Japan, there is no brighter star than Ruth.

But then again, it’s 1934, and all is not well in Japan and the world. Japan’s military is not only in Manchuria, but also in Korea.  Unrest is within Japan as well. Dark forces of the ultra nationalistic War Lord Society plan mass assassinations to overthrow Japan’s established government. And under the veneer of the seemingly calm waters of diplomacy of this baseball tour, the Japanese are reeling about the international criticism of Japan’s policies and aspirations.

Is Japan destined to peace, or will it be war? Is baseball merely a pastime, or is it true diplomacy? Does the playing of baseball reflect culture and society in its deepest core? Are there spies in the American baseball delegation? Will Japanese elements of the planned coup thwart the tour, and target those associated with the tour? This baseball story in the autumn of 1934 frames a much larger narrative of culture, history, and espionage.

The book’s detailed travel log fills in what it was really like to travel in 1934 Japan, and to sample the best of a VIP tour. The clothing, dress, and appearance of people, places, and of course the food, are lovingly described. For instance, Babe Ruth’s affection for master chef “Hige’s” tempura is recalled, and a photo of the two completes the narrative.

For the recounting of games, author Robert Fitts narrates with all the entertaining color of a seasoned sports broadcaster, yet he wisely chooses to keep certain game details brief when the pace dictates it.

Author Fitts’ passion for Japanese baseball is infectious, but it is his discipline in archaeology that brings untold skills in research and making connections fascinating, not dry and simplistic.   The way the Japanese played baseball in the 1930s, for example, is more than the Americans’ contemporary analyses, as Fitts adds not only how years of culture affected the way the Japanese developed, trained for and played the game, but also how those same forces pointed individuals toward war.

Other forays into culture, everything from the origins of Japanese baseball to the 47 Ronin, are equally entertaining. However these are not mere diversions or meaningless trivia. Like spontaneous deviations away from a planned travel itinerary, these side narratives yield unexpected delights.

Readers who turn away from this narrative journey through 1934 Japan because baseball is not their game will miss something incredible and previously untold.  Robert Fitts, like the Babe, has blasted a homer out of the park.