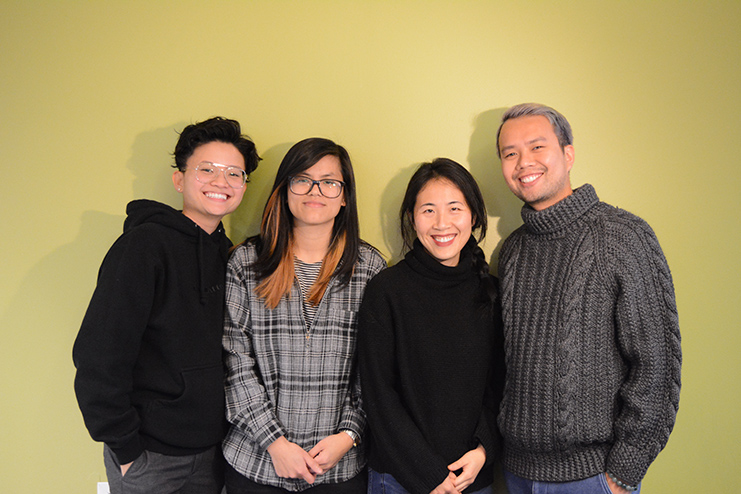 In 2016, five queer Vietnamese people came together to translate from English into Vietnamese a health card called the Q Card, a communication tool created and designed to empower LGBTQ youth to become actively engaged in their health. This ended up being the first meeting of the minds that went on to form their own organization called ViệtQ, whose goal was to be a resource for the Vietnamese LGBTQ community.

The name “ViệtQ” could allude to Vietnamese people who are questioning their sexuality and/or gender identity or queer Vietnamese people. “But it is also a play-on-words of “Việt Kiều,” explained Tony Vo, one of the group’s founding members, “which means Vietnamese in the diaspora.”

The group organized an intergenerational panel of speakers in 2017, but then was only active on social media for the next two years. Then, in May of 2019, Tran Tonnu, a family friend of Vo’s, reached out to Vo with a spark of an idea that they came up with while meditating on vacation. “I was like, I don’t know any queer Viet people other than Tony really,” they said, “and there’s probably a lot of queer people here in Seattle, so let’s just do a conference.”

Vo told a work colleague Dao Tran about the conference who also came on board to help plan. When they began reaching out to find a graphic designer to create materials for the conference, Van Vu reached out to help with the conference’s logo and website design. Together with Tonnu, these four Vietnamese queer community leaders began planning what will be the first LGBTQ conference in Washington state.

Originally, they had a few name choices for the conference. “We talked about our respective experiences with our families,” said Tran, “And then Tony was talking about how our families call our significant others ‘Bạn’.” In Vietnamese, ‘Bạn’ means ‘friend’. “But in the LGBTQ community, it means more than friends,” said Vo.

Once they had a name for the conference, they started to brainstorm topics that they wanted to highlight and began reaching out to community leaders who could inspire thoughtful conversations within the community.

“I think community leaders are community oriented and find value in building those connections and relationships with one another,” said Vo. “And that’s what this conference for me is about – finding other people that share my similar stories and backgrounds so that we can have that shared dialogue and begin to reflect and heal and move forward.”
Through inviting speakers and holding multiple workshops on the day of the conference, the organizers’ goal with Bạn is to bring the community together and allow conversations surrounding the queet Viet community to continue. One example was their effort to invite QTViet Cafe Collective to host a workshop addressing the cultural experience of navigating interpersonal relations and identity-related conversations over food. Tonnu also recognized that there were a lot more queer Vietnamese organizations in California, so bringing them here could help people within the communities understand different ways to take initiative and mobilize local resources to strengthen their community.

“For me, planning the conference has been a way for us to take space,” said Tonnu, “for us to show that we are here.”

Other than gaining the support of queer Vietnamese communities across North America, the ViệtQ members also depended on their own local community connections. Before the conference was announced on December 24, 2019, they hosted a karaoke fundraising event and had what they felt was a great turnout. Then, once the conference was announced, the planning process moved along very fast. “The reality is, we haven’t come up with so many challenges because our community has been so supportive,” said Tran, “and I think this is something that people have beenQ waiting for.”

“I think having this conference is a good catalyst for people to find each other and finding ways to sustain that support,” said Vo. Although Bạn will be Washington’s first LGBTW Vietnamese conference, ViệtQ is here to make sure that this will definitely not be the last.
Bạn is on February 29th, 2020 from 10 AM – 4 PM at the Asian Counseling and Referral Service. All LGBTW Vietnamese folks, families and allies are welcome.

Update: The event is currently full. Reach out to ViệtQ for more details.

“It’s a vicious cycle, and it’s not okay”: Seattle man who was target of racial slurs said police in Seattle and across the country...

Chinatown-International District coronavirus updates, May 27, 2020—The latest news and information from the neighborhood and beyond

Sidhu Farms: A small family farm adapts in the era of COVID-19