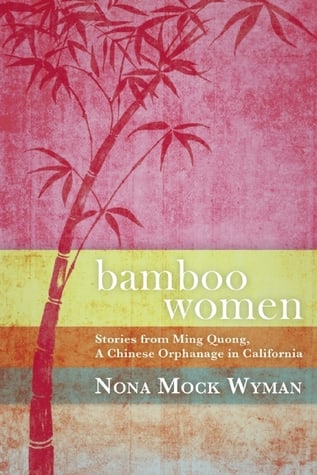 “The Home.” I’d heard this phrase from my mom plenty of times while I was growing up, but never too many details. My mom’s oldest friend is from the Home. One summer, we were picking up my son from a summer Go camp that was held at Mills College. As we were waiting, we noticed a historical photo display that labeled one of their buildings as having been the former Ming Quong Home for Chinese Girls. My husband exclaimed that his childhood church, Watsonville’s Westview Presbyterian Church fundraised for Ming Quong. My mom quietly observed, “Oh, so this is where The Home used to be located.” Mills purchased the building in the mid-1930s. My mom spent several formative years living in the Oakland Chinatown site of Ming Quong.

Bamboo Women author Nona Mock Wyman was a long-term resident of Ming Quong and in addition to writing a memoir, Wyman collected 21 stories of other “MQ” girls. Wyman explains that “Ming Quong” is Cantonese for radiant light and this orphanage was established by none other than Donaldina Cameron, whose “rescue” work among Chinese prostitutes in Chinatown was the genesis for a Presbyterian women’s shelter in 1874. Through this anthology, Wyman intends to correct the misunderstood history of Ming Quong and to honor the girls who became “Bamboo Women”, whose lives show such strength and flexibility.

Wyman includes photos that capture their girlhood, from early to young womanhood. I was startled to see a “Ruby” among the teenagers in their Easter Sunday outfits; but when I showed my Mom, she laughingly said the girl in the photo was the Other Ruby—clearly a more popular name than I had realized. Nonetheless, she eagerly read the entire book the afternoon that I gave it to her—and as quickly, alerted her girlhood friend, J., who, like Wyman, had entered the Home as a young child and stayed through high school graduation.

The stories of these girls defy the “model minority” mythology, which claims that Chinese value family above all else and their hard work always prospers. The official policy of MQ was to “protect” the children from knowing why they had been placed in the Home. However, a ledger of entry was discovered at the Los Gatos site (Mills college was the original site; Oakland Chinatown site #3) going back to 1915. Reasons for entry were still vague or euphemistic, such as “health of child” or “unfit home.”

The stories are told simply and through Wyman’s friendship with each narrator. Wyman’s haiku epigraphs for each chapter are the most subtle part of the book. The vignettes are recollections without adornment or analysis; they describe the lives that each made for herself.

Chinese Exclusion laws limited the growth of Chinese American families. The existence of Ming Quong and its male counterpart, Chung Mei Home for Chinese Boys, exposes a fractured part of Chinatowns, a void filled by Christian social services that cared for Chinese children when families and community could not.

MQ girls became a sisterhood and their friendship reaches across the years:

strolling hand in hand
pretending to be sisters
in their hearts, they are

“Tastes Like War” is a memoir of a mother-daughter journey and an exploration of war, trauma and schizophrenia

Asian and Pacific Islander UW students produce “In a Yellow Tone”, a comic novella about Asian Americans during WWII