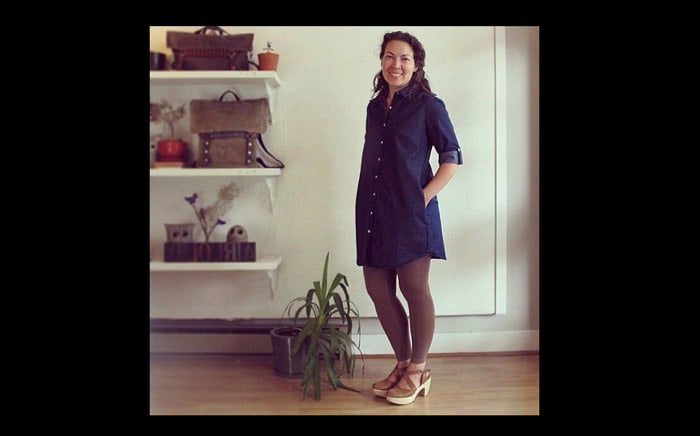 Each month, Velouria participates in the neighborhood Artwalk and has featured artists such as Jenny Vorwaller, Frida Clements, Isabelle Robertson, and The Society of National Industry. This month, Velouria highlighted the work of painter Drie Chapek and Ballard jewelry designer Jules Cechony. And in April, the shop will host an exhibition of Melanie Biehle’s work.

Eustace discovers many of the shop’s artists through word of mouth and social media.

“One of our favorite artists came into our shop because of a picture we posted on Instagram,” Eustace said. “She passed along her beautiful business card. I had to look Jenny up right away and book her for a show.” 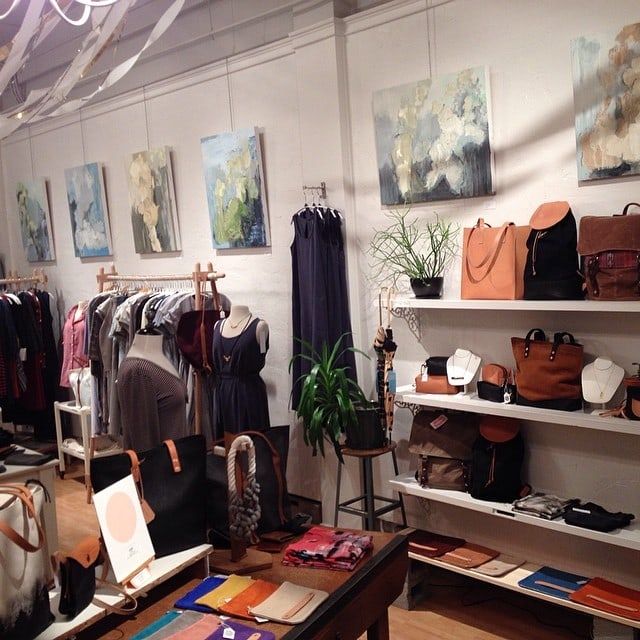 In addition to providing a platform for visual artists, Velouria offers carefully curated pieces by a range of talented independent designers. Herman Yu, who acquired her childhood nickname “Herman” at summer camp, creates spare and elegant cards and prints with botanical imagery. The shop carries illustrated note cards by Irene Akio, author of T is for Tokyo, a bilingual children’s book. SODO artist Tiffany Ju presents a line of ombre hand-dyed tights. Alice Wu, who is one half of the duo behind Feral Childe, features beautiful prints and inventive tailoring. Mimot Designs is a line of bags made by Thomas Im out of Los Angeles. Velouria also carries stylist garments by Sunhee Moon, a San Francisco-based clothing designer who produces a line aimed at professional women.

Velouria also stocks the work of jewelry designers that include Flora and Fawn’s Angela Muhlnickel and Jean Lee and Dylan Davis of Ladies & Gentlemen, in addition to designs by metal artist Dorothy Cheng.

“Dorothy has an exceptionally high level of craftsmanship and artistry present in her work,” Eustace said. “Her interest in medieval art history reveals itself in her design language, which is simultaneously very modern.”

Eustace’s passion for design dates back to her studies at the Rhode Island School of Design (RISD), where she was part of a community of highly driven, and skilled, young designers.

“It was so motivating during freshman year to pull all-nighters on drawings next to other people doing the same,” Eustace said. “There was a lot of solidarity in the industrial design major, you could always get feedback or help from someone around you if you needed it.”

Eustace first witnessed the results and the act of independent and rigorous effort during her experiences at RISD.

“I feel very fulfilled when I can pursue an idea with the effort I feel it deserves,” Eustace said.

After graduating from RISD, Eustace and her partner moved to the West Coast.

“We really thought we’d be in Seattle for a couple of years before we moved to Japan or Europe or New York,” she said.

Eustace, who has a Japanese mother, spent her early childhood in Saudi Arabia, where she and her brother were surrounded by families of mixed ethnicities. Her family later moved to the Boston area where Eustace recalled standing out.

“We stood out for having unusual names, being well traveled at young ages (37 different countries by the time we were 8 and 10) and biracial,” Eustace said. “We found ourselves explaining to a lot of kids that Japan and China are different countries.”

Eustace observes that most Seattleites seem more familiar with different Asian cultures, particularly with the predominance of language schools available for children. “The fact that there’s a demand is pretty different from when and where I grew up,” she said.

Not long after arriving in Seattle, Eustace came across a job posting at R.E. Load, a custom handmade messenger bag company.

“When I joined up with [R.E. Load],” Eustace said, “the DIY movement was pretty new. You could put a bird graphic on anything and it would sell.”

Eustace started making wallets from fabric scraps and sold them at I Heart Rummage, and later Etsy.

“I knew what I was doing wasn’t very profitable, but it felt so good to be passionate about designing and making my little line,” Eustace said. “I just kept at it. Eventually, I redesigned my line of wallets to be easier for me to manufacture and the focus really became notebook covers.”

In June, Velouria will mark its ten-year anniversary.

Chika Eustace’s designs can be found at www.randlgoods.com. The next Ballard Artwalk takes place on April 12. Visit Velouria at 2205 NW Market Street in Ballard, or online at www.shopvelouria.com.