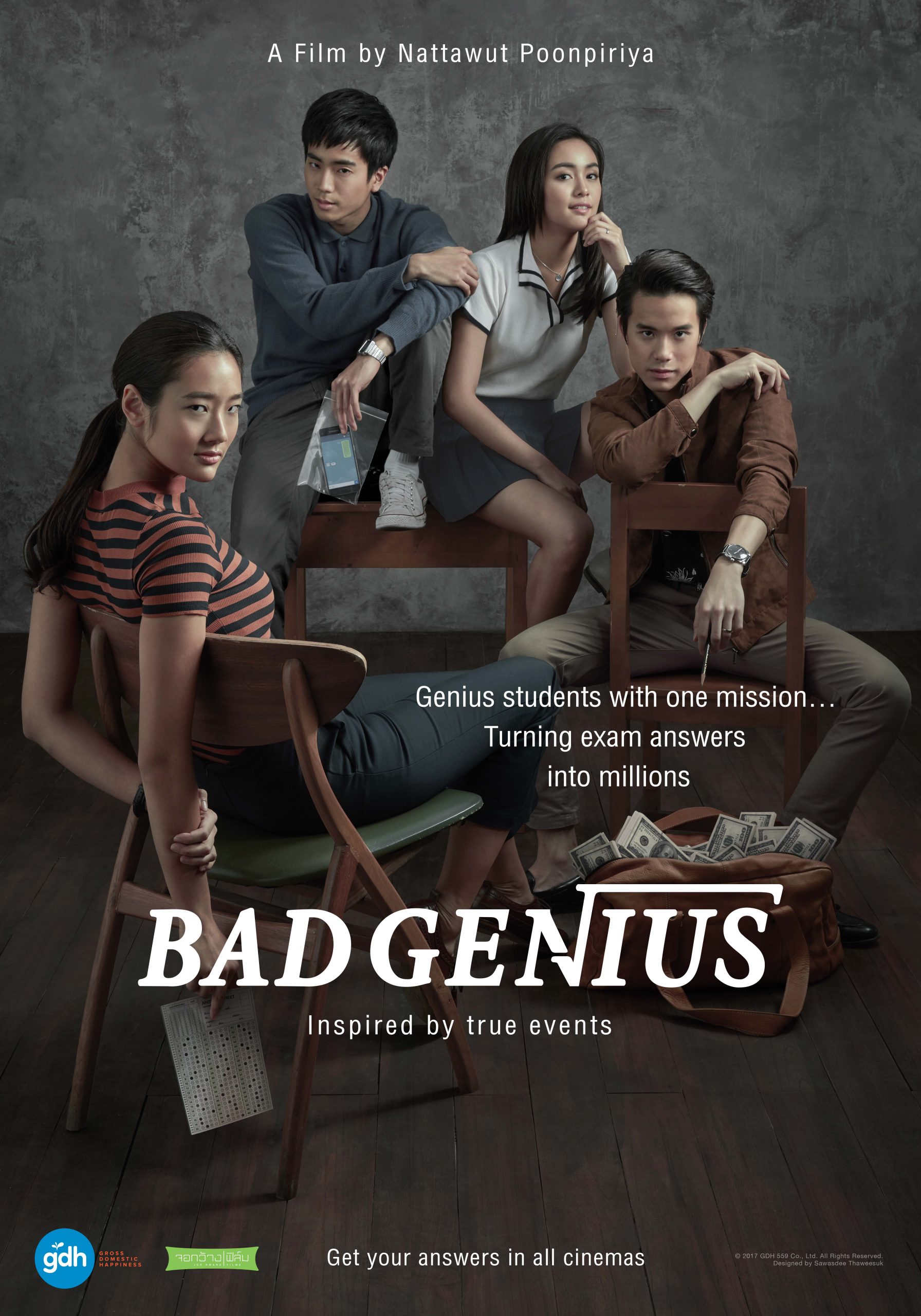 Thanks to the enthusiastic suggestion of three officers from the UW Thai Student Association, I attended a screening of Bad Genius on campus and learned why the movie is the most internationally successful Thai film in history.

Released in May, 2017, the film ranked number one at the Thai box office for two weeks and broke Thai film earning records in Cambodia, Taiwan, Malaysia, Hong Kong and the Philippines, as well as China where it earned over $30 million. It also played in Australia to wide acclaim and has an audience rating of 92 percent on RottenTomatoes.com.

Bad Genius catapulted Thai filmmaking to the industry’s consciousness that there is serious talent in the Kingdom of Thailand. Screened at multiple international film festivals, including the Fantasia International Film Festival where it won Best Director and the New York Asian Film Festival where it won Best Feature, the film has been described by critics as “as entertaining as Ocean’s Eleven” and “a work of craft that will help raise Thai cinema to another level of diversity.”

Structured like a heist film and inspired by the real-life story of students cheating on the SAT, Bad Genius is about a quartet of students who devise and execute an international exam-cheating scheme. Lynn (played brilliantly by Thai model Chutimon Chuengcharoensukying in her movie acting debut) is a lower middle-class student at the top of her class attending a private school in Bangkok. Though she is at the elite school on full scholarship, her single father struggles to pay the extra fees it costs to attend, so she begins to turn a profit by helping her classmates cheat, which starts with her only friend Grace, the president of the drama club who needs to maintain a certain GPA to perform in the school play.

The setup accelerates to mindblowingly lucrative proportions as Lynn is encouraged by Grace’s boyfriend to rake in large fees from the rich students for the real-time answers of an international college admissions exam. To execute their plan, the quartet manipulates another lower middle-class genius, Bank (played by Chanon “Non” Santinatornku), to join Lynn on a trip to Sydney, Australia where the two will sit for the fabled ESTIC test on the same day as their paying customers in Bangkok, commit answers to memory, and send them back during exam breaks in toilet stalls where they have concealed cell phones. There is one nail-biting chase scene in the heist thriller, where Lynn attempts to complete her mission while being pursued by a test monitor in an underground subway station.

The popularity of Bad Genius in Asia and Australia is a credit to the engaging storytelling – an exciting and tense 130 minutes. The film boasts a strong cast and groundbreaking direction around a simple script.

Bad Genius is a fascinating commentary on the corruption of school institutions, class inequalities, and teenage social issues. I suspect it also resonates with Asians who identify with the familial and societal pressure to excel academically, at whatever cost. Social currency – acceptance by peers, especially the cool kids – has influence even if money is not involved in a cheating exchange.

At my international high school in Thailand, I witnessed firsthand that average, arguably lazy, but wealthy students could easily gain their way to success with money and connections. My ex-boyfriend, our class valedictorian, confessed to me that he wrote the admission essays for his best friend to transfer into one of the most elite private schools in the U.S.  Even when cheating occurred right under their eyeballs, teachers cast a blind eye, ignored the obvious or looked away. Their failure to acknowledge and discipline the rampant cheating may have signaled their complicit attitude with the systemic corruption. The rich kids in Bad Genius – and at my school – spent more time figuring out how to cheat than actually studying.

Intriguingly, the film was not censored by the Thai government – perhaps a sound decision, since Bad Genius has brought worldwide acclaim to these issues and to the upward trajectory of Thai filmmaking.