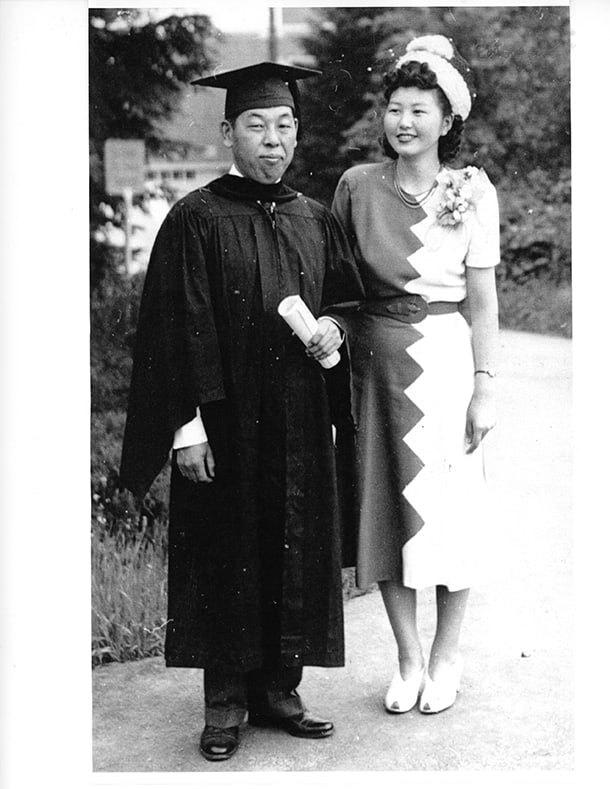 My mother, Ayame lwasa Tsutakawa, passed away a few weeks ago at Keiro Northwest in the special unit for memory care patients. For a decade and more, she lived with dementia. Although she remembered less and had little logical thinking, she remained a gracious and polite Japanese lady who loved music of all kinds.

Ayame was born in Hollywood, California, in 1924. As her mother was a busy restauranteur, Ayame was sent to live with relatives in Okayama, Japan, from the ages of 2 to 14. When she returned to the United States to live in Sacramento with her mother, she met a younger brother and a new stepfather. She became adept in Japanese traditional dance and music and was selected Miss Nisei Sacramento for the Golden Gate International Exposition in 1940. Like other Kibei Nisei who were born in the United States but raised in Japan, she was bilingual and continued a lifelong interest in Japanese arts and culture.

The family was incarcerated at Tule Lake Camp in dusty northern California during World War II. The residents included many born or educated in Japan and Ayame performed traditional dance on stage there. In camp, she met Nisei artist and U.S. Army sergeant George Tsutakawa (1910 to 1997) who was visiting his relatives, the Moriguchi family. George also was Kibei Nisei, born in Seattle and raised in Okayama before returning to America.

After leaving Tule Lake, Ayame helped her mother to operate a small Japanese restaurant named Iris Grill (her name Ayame in English) in Sacramento. The spot became a favorite of Nisei solders returning from the European front and stationed at a base nearby. In 1947, Ayame moved to Seattle to marry George and she became an adept chef and hostess for events with local artists and those visiting from Japan.

Ayame was dedicated to the idea that the growing and busy Asian American community here should learn about and appreciate the arts. And she actively endeavored to get the non-Asian community to learn about Japanese culture. She organized one of the first Asian American art exhibitions at Wing Luke Asian Museum in the late ’70s. She became active in the Ikebana flower arrangement society, Asian Art Council of the Seattle Art Museum, and Kubota Garden.

She leaves a legacy in the establishment of arts in Seattle. The wife of a noted Pacific Northwest artist, Ayame was invaluable in helping her husband to accomplish a life noted for his paintings, sculptures, and fountains. And she and George had four children, all involved in the visual and performing arts today: Gerard, Mayumi, Deems and Marcus. She also taught an appreciation for Japanese culture to six grandchildren (Kenzan, Zana, Yayoi, Raeya, Kizamu, and Carly).