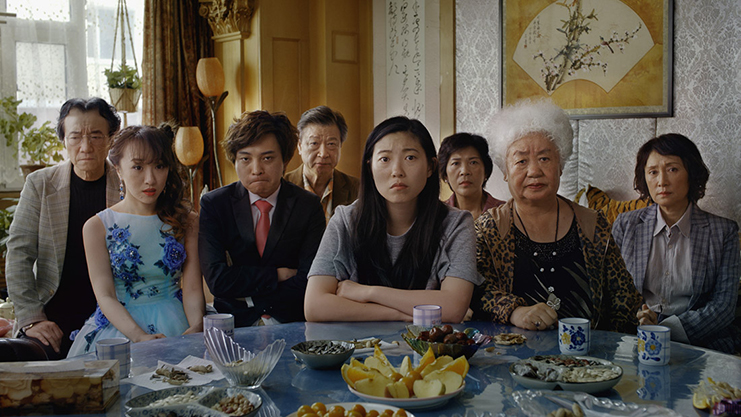 “Based on an actual lie,” proclaims The Farewell, the second feature from concert-pianist-turned filmmaker Lulu Wang, which was shown at the 2019 Sundance Film Festival in January. Inspired by her own family’s dealing with her grandmother’s diagnosis of advanced lung cancer, the film is an intimate exploration of love and loss in the face of cultural differences.

Rapper/actor Awkwafina, fresh off of a breakout year in 2018, stars as Billi, the struggling New York artist daughter of Chinese immigrant parents. (Like Wang, Billi’s character was born in China, but has only vague but fond memories of her homeland on account of moving to the U.S. at a young age). Despite the distance, Billi shares a close relationship with her grandmother, affectionately called Nai Nai, who lives back in China. When Nai Nai’s sister accompanies her to the doctor and receives the harsh news that Nai Nai doesn’t have much longer to live, rather than tell the truth she decides to inform her sister that her lungs merely contain “benign shadows.”

As a ruse to get the family to congregate and spend time with Nai Nai without her suspecting that it’s because death could come for her at any given moment, Nai Nai’s two sons orchestrate a wedding between Billi’s cousin and his girlfriend of three months. Despite her misgivings about lying to Nai Nai, and her parents’ protestations that she’ll ruin the plan because she can’t hide her emotions, Billi flies to China for the wedding. Like any family gathering, what ensues is a rollercoaster of joy, nostalgia, awkwardness, guilt and introspection.

As Billi, Awkwafina displays the same acerbic wit and comedic timing that endeared her to audiences in last year’s Ocean’s 8 and Crazy Rich Asians, while simultaneously exposing the raw internal struggle of a daughter trying to reconcile her ‘Western’ ideals and convictions with her family’s traditional attitude. As Billi insists that in the U.S., intentionally withholding Nai Nai’s test results and diagnosis and lying to her would be illegal, her relatives and doctors assure her that, in China, it’s quite normal.

Under Wang’s script and elegant direction, The Farewell balances a sensitive, personal story with humor. Oftentimes, the most powerful moments in the film are the simple ones, when Billi and Nai Nai tease each other and the older woman dispenses advice, like when she hands her granddaughter a red envelope containing cash and says, “Don’t spend it on rent — buy something nice for yourself.”

While the setting and circumstances may be unique to Chinese culture, the relationships between the family members and the dynamic of their interactions are entirely relatable. Billi’s sense of being torn between her personal values and those of her family and culture will resonate not just with Asian Americans, but with anything-Americans who have ever felt at odds with traditional expectations and beliefs.

Regardless of how one feels about the morality of the family’s decision to deceive Nai Nai, the significance of the wedding and the togetherness it entails is a reminder of how the love reciprocated by those we hold dear can sustain us in surprising ways. We may have little control over the end, but after a life well-lived what more can we ask for?