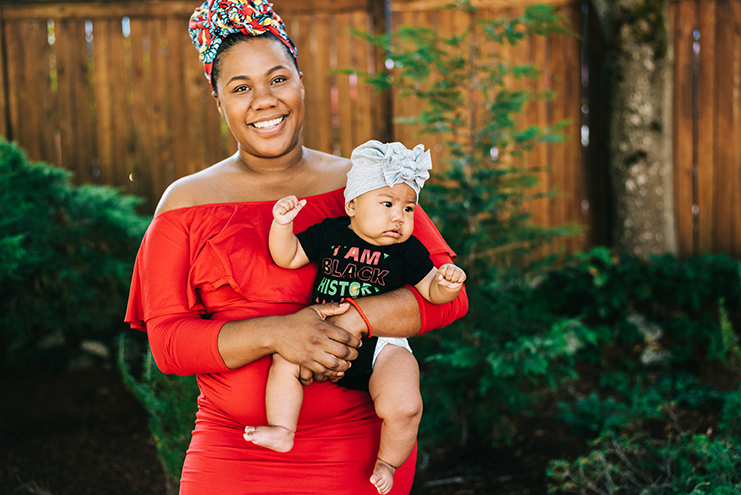 This article by Sharon H. Chang originally ran in the South Seattle Emerald on August 28, 2020. It is being reprinted with permission.

“Here we are. I finally pressed record. For 10 years I’ve been talking on someone else’s microphone. But this time around — I got my own.” Jenna Hanchard is an award-winning journalist who worked in newsrooms across the U.S. for a prolific decade. But after years of living what she calls a “muted version of my truth” in toxic news spaces, Hanchard finally found the courage to unmute and quit. She left commercial journalism last year and this summer launched Lola’s Ink, a heartfelt, personal podcast about Black girl liberation and “the risks and actions we take, big or small, to feel even a little bit more free.”

Hanchard, who lives in Delridge/White Center with her husband and infant daughter, was born in New York City, where her own parents are from. Hanchard’s mother is Black and her Jamaican father, Michael Hanchard, is a world-renowned political scientist and professor of Africana studies. Hanchard’s family moved a lot when she was growing up, eventually settling in Illinois. “A really big part of my household was education around Blackness and history,” she said, “also my own Blackness and my own liberation.” After high school, Hanchard decided to study Broadcast Journalism, History, and French at Syracuse University. Her father called her Ida B. Wells.

“There was a big part of me for a really long time that believed local news could be helpful,” said Hanchard, “if I could capture that first draft of history, I could impact the way people would see the world unfolding in front of them.” Most Civil Rights Movement footage comes from local news, she pointed out, and it was a strategy of Civil Rights activists to get as much media attention as possible. Hanchard believed becoming a reporter would allow her to be at the forefront of thinking about systemic racism and its impacts upon communities of color and give her latitude as to how that story would be told.

From 2009 to 2019, Hanchard worked as an anchor reporter at NBC News in New York and Chicago, WBNG TV in Binghamton, New York, KSHB TV in Kansas City, Missouri, and KING 5 TV in Seattle and Tacoma. She started to realize mainstream journalism was not the place to tell the stories she wanted to tell— at all. The turning point came mid-career when Hanchard covered the murder of Michael Brown. Local news about Ferguson was absent or sporadic, centered whiteness, and prioritized the state. Then, during her time at KING 5, Hanchard fought hard for two round-table discussions — Race & Parenting and Race & Sports — but ultimately the station’s white leadership chose not to air anymore of the conversations.

Commercial news does not care about Black people, said Hanchard, and she was fed up. “I realized that objectivity is rooted in whiteness,” she wrote in a recent Instagram post, “and American newsrooms are anti-Black, upholding the same white supremacist system they are supposed to critique.” So, last year, Hanchard made the tough decision to leave her long-time career in broadcast journalism. It was a liberating decision but also heartbreaking.

Stories are her activism and storytelling one of her gifts, Hanchard said. “I always was trying to think about the ways in which I could continue telling stories after leaving commercial news. So, I thought, what if I pose the question — what happens when a Black girl decides to be free?” Hanchard created a podcast to process her liberation from mainstream journalism (“when I left the plantation”) and heal from the trauma of working in toxic news spaces. She named her podcast Lola’s Ink after journalist and civil rights leader Ida B. Wells, whose writing alias was Lola.

There are five episodes in the first season of Lola’s Ink. The finale aired last week. Episode 1 is a conversation between Hanchard and her father, the person she says has had the biggest influence on her consciousness. Episode 4 is a love letter to Hanchard’s Black and Cambodian daughter, Lena, featuring interviews with Black and Cambodian women and words from the infant’s Cambodian father. Other Lola’s Ink episodes include interviews with Hanchard’s co-workers, her career coach, and a Black writer and historian she admires, Dr. Brittany Carter.

“I was really nervous to put this podcast out in the world because I’ve gotten a lot of no’s in the system I previously worked in,” admitted Hanchard. “It can be hard to keep walking with your head high.” The feedback Hanchard has gotten on season one of Lola’s Ink, however, has been extremely positive. Listeners say they are grateful to hear different perspectives and need diverse stories to understand what is happening in the world. The experience has helped Hanchard believe in the power of her storytelling outside of white-dominant spaces.

It feels really good to be in full creative control of her storytelling, said Hanchard. She does everything for Lola’s Ink including writing, recording, producing, and editing. “It feels good to be able to make mistakes, explore … I can be a part of crafting stories for Black and Brown communities.” Intimate, honest, and real, Lola’s Ink is a Black woman speaking her truth, thriving instead of surviving, and daring to be happy. The podcast is a complete departure from the oppressive commercial media Hanchard used to have to do, and exactly what society needs, she said, to move the needle.

Hanchard is currently looking for sponsorship to continue Lola’s Ink and just started working on a four-part Black liberation series with KUOW. This moment, the historic global uprising for Black Lives, she said, is a test. If people truly want stories outside of white supremacy, they need to invest, uplift, and amplify Black and Brown creators. Lola’s Ink has shown Hanchard she can build her own platform outside of white supremacist, corporate spaces, and do the things she values. “It’s given me a lot of hope and more confidence that I can create for myself and for my family and for Black people.”

South Seattle Emerald writer Sharon H. Chang is an activist, photographer, and award-winning writer. She is the author of the acclaimed book Hapa Tales and Other Lies that reflects critically on her Asian American, Mixed Race, and activist identity through the prism of returning to Hawai‘i as a tourist. She lives in the Columbia City neighborhood.