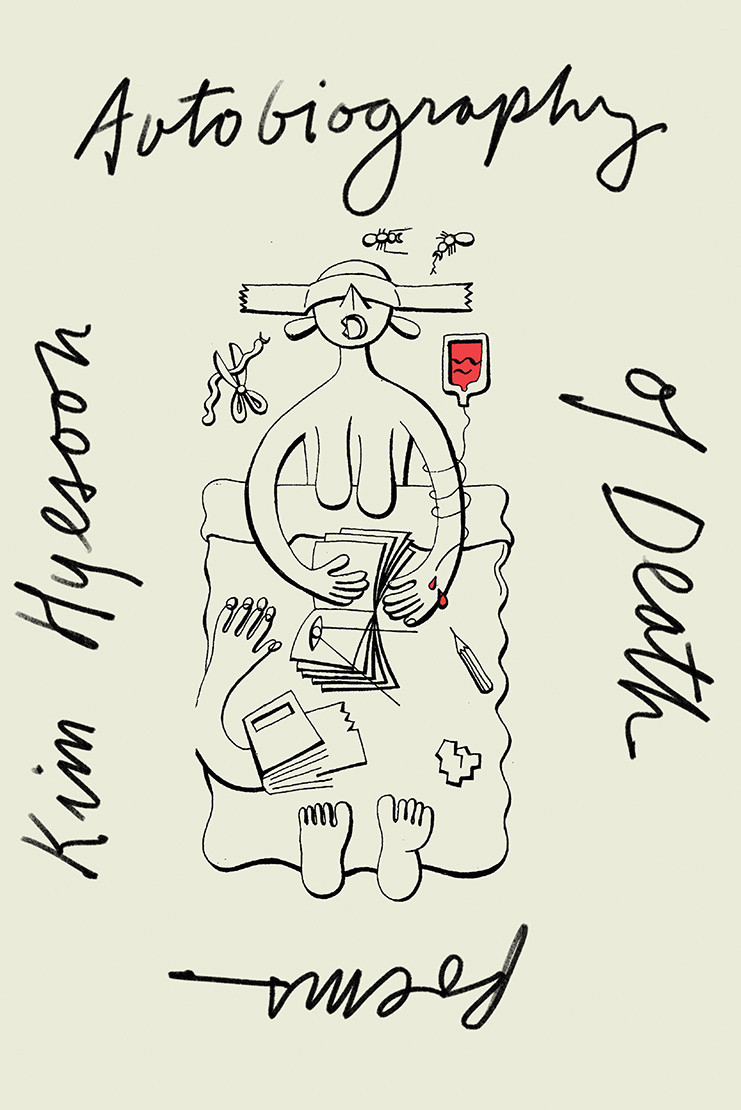 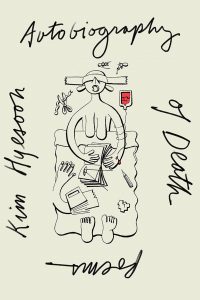 Seattle-based poet and translator Don Mee Choi has long been an advocate and translator for Korean poet Kim Hyesoon, and the newly published Autobiography of Death – the sixth book of Kim’s that Choi has translated – represents the height of what Choi and Kim’s collaborations have produced.

Kim’s characteristic style and thematic preoccupations – unsettling organic images, domestic surrealism, strategic repetition of words and phrases that reads as at once sing-songy and urgent – are on full display in this collection. The poems are punctuated by illustrations by Kim’s daughter, Fi Jae Lee, whose childlike yet threatening drawing style complements the collection’s interest in fractured kinships and grotesque bodies. These familiar tropes are overlaid by an overarching frame based on the Buddhist notion that a person’s spirit undergoes a 49-day transitional period after death, a structure which lends emotional weight and narrative rhythm to poetic moves that might otherwise feel difficult contextualize, especially for readers for whom contemporary poetry is an unfamiliar genre.

In “A Crow Flew Over the Cuckoo’s Nest: Day Thirty-Eight,” one of the more manifestly experimental poems in the collection, the speaker dispenses with spaces between some words, resulting in bunched-up passages like “Yourfatherinheave. Belovedbullshitfather. Heasksforthechild. / Atnightthesnow hiddendeepinheaven fallsflakebyflakesecretly.” In the context of the rest of the book, we can see how Kim, through careful control over the book’s tonal progression and its repeated deployment of specific images and ambiguous sentiments (“You betrayer, I miss you!), earns the kind of close readerly attention required to engage with strange lines like these.

When a poem strays into the realm of abstraction, it is always reined in by concrete images that anchor the reader in a familiar world of things even as they estrange the ordinary operations of language and its relation to external reality as we typically understand it. A set of confounding lines like “The only thing you can give birth to yourself is, your death / Nurture it, give birth to it as a tasty plump death” is grounded in the poem that precedes it, which opens:

The motifs of cooking and eating bridge the gap between this poem and the curious description of death as “tasty” and “plump” in the subsequent poem. Perhaps even more importantly, the simple declarative structure of the two quoted stanzas set the stage for the pointed use of the second person (which appears with uncommon frequency throughout the collection), in the more abstract poem that follows. The intensity of the second-person address – the “you” always poking its finger out of the page, at once individualizing and admonishing – lends the poems in the collection an immediacy that would otherwise be difficult to achieve. Kim explains that the first-person perspective found in most lyric poetry today was not well suited for this collection, despite its self-identification as an autobiography: “Which individual narrates my death? Can I call my death “I”? As I began to speak through my death, my death became “you.” My death made the I into “not I.”

The end of the book includes Choi’s interview of Kim and a brief “Translator’s Note,” which just by themselves are worth the price of admission. In the interview, which reads more as a conversation between friends, Choi and Kim build off of each other’s remarks in a wonderfully fluid and generative way, touching on instances of historical and political violence that informed some of the poems, the affordances of “women’s language,” and the trajectory of Kim’s career so far.

Importantly, Kim notes that the Sewol Ferry Disaster – an incident in 2014 in which the sinking of a Korean passenger ferry resulted in the death of 300 people, most of whom were high school students – had been a major impetus for the meditations on death that fill this book. “[I]t occurred to me that all the poems in this collection were written by death, as a kind of autobiography,” Kim says, “I came to think that I, we are all part of the structure of death…that I’d been kept alive by death.”

At the end of the interview, Choi asks Kim to discuss “Face of Rhythm,” the last, standalone poem in the collection, prompting Kim to give a moving account of how her experience with chronic pain informed her poetic practice:

“Pain is physical and rhythmic, whereas anguish is mental and melodic. My pain had no meaning. The only thing that lived in that meaningless space was rhythm. Rhythm is bodiless, it exists alone like the planetary orbits that keep the stars of the universe in motion…And I thought to myself that I needed to excavate the faceless face with language, excavate the face with the rhythm embodied in language.”

Just as with her remarks on the Sewol Ferry disaster, Kim’s answer here neither glorifies pain and suffering nor minimizes their role in her writing process. Instead, the response is emblematic of how Kim treats a subject as well-worn as death, in all its myriad forms, with a kind of sensitivity, experimental ambition, and thoughtful levity that open it up for poetic reflection.

Don Mee Choi will be reading from Autobiography of Death at 7:00 PM on Saturday, March 9th at Elliott Bay Book Company.