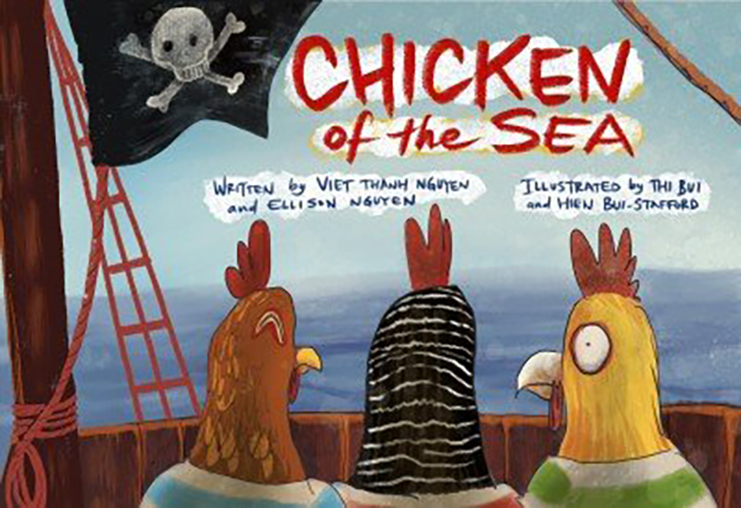 The words “Chicken of the Sea” might at first conjure images of a brand most often known for its canned tuna, but fans of Viet Thanh Nguyen and Thi Bui will come to know of the title as a first-time collaboration between two literary behemoths outspoken about the experience of refugees. Although their names help bring the children’s picture book some clout, the creative genius behind the book’s origins lie in the contributions made by their sons, five-year-old Ellison Nguyen and 13-year-old Hien Bui-Stafford.

Viet Thanh Nguyen and Ellison Nguyen are set to drop by the Elliott Bay Book Company at 2:00 PM on January 11. Come and join in on the fun as they talk about their collaborative process. Take this opportunity to get burning questions answered, perhaps about how to inspire collaborative works and projects done between family members or children. Get autographs for Nguyen’s books or snag a copy of this delightfully rousing and unusual tale about pirating chickens and their hearts of gold.

The concept, story and title of Chicken of the Sea come straight from the mind of Ellison, who was inspired to bring his vision to life when he first met Bao Phi and Thi Bui, the author and illustrator of one of his favorite books A Different Pond, which was the 2018 Caldecott Honor winner, at an artist’s retreat. After meeting Phi and Bui, Ellison combined his love of animals and his intrigue with pirates and came up with the rudimentary framework for Chicken of the Sea. The book revolves around three bored chickens on a farm who get invited to a life of piracy by a rat captain bent on stealing gold treasure from his nemesis the Dog Knights.

Initially not seeing the potential behind his son’s work but wanting to encourage his creativity (and probably to show off to his 5,000 Facebook friends), Nguyen lettered his son’s narration and posted it on his account. It was Kristina Kearns, the executive and editorial director of McSweeney’s, who then spotted the potential for the story and proposed the possibility of a book deal. Nguyen then fleshed out the story with more prose, keeping his son’s concept and story idea intact.

Nguyen immediately thought of Bui to illustrate, but her other commitments prevented her from getting fully involved with the project. The rough sketches she saw of the battle scenes reminded her of the work of Hien, who was more experienced at drawing such things. Upon asking her son about his interest in the project, he immediately got ideas of what to draw. When his sketches were approved, Bui decided she would color his illustrations, allowing her to collaborate with her son while also having a supervisory role.

When Hien expresses doubt about becoming an artist in an interview with the “School Library Journal,” Bui says, “See? Let your kid be an artist, and they might still want to be an engineer. You can’t control anything, parents.”

Chicken of the Sea has a fast-paced storyline that may leave the reader dizzy and wondering what world they had just entered into, but underneath the chaotic nature of the book (that may well be imitating the short attention spans of chicken and—uh-hem—your children), the pure heartedness of the naive and generous birds shine through and is rewarded at the end, bringing peace for all—surely a message every parent wants to leave for their young children. Drop by during the event and get a copy of this book that kids are bound to laugh at—after all, it’s from the highly imaginative mind of a five-year-old.

Viet Thanh Nguyen and Ellison Nguyen will be at Elliott Bay Book Company at 2:00 PM on January 11.