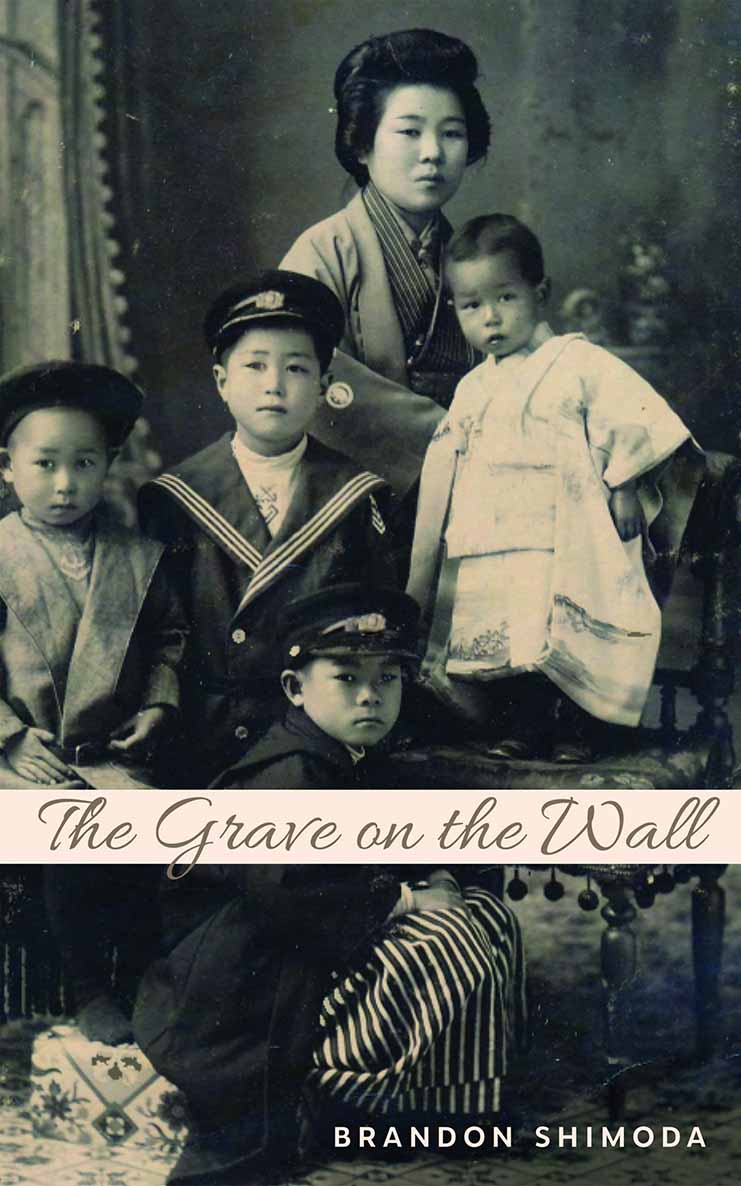 All Japanese American stories are ghost stories. I never really understood why until I read Brandon Shimoda’s The Grave on the Wall.

In 2010, Shimoda, then living in a cabin in Maine, was “having a falling out with poetry,” as he put it. Inspired by a mysterious photograph of his grandfather, Midori Shimoda, taken at a Department of Justice prison at Fort Missoula, Montana, he found himself turning to prose.

The book depicts Shimoda’s effort to reconstruct an image of Midori from the traces he left behind, through a sui generis blend of research, pilgrimage, reflection, speculation, and even visions. Ultimately, it is less about restoring a grandfather’s memory than about bearing an active responsibility for his absence—an absence that sometimes acts like a living thing.

“Even though the book has been out for a year now,” he told me, “I cannot say with any confidence that it is done.”

The following interview was lightly edited from emails Shimoda composed while his young daughter was sleeping or watching cartoons. I suppose it is a correspondence between ghosts.

IE: Your grandfather died when you were young, but Alzheimer’s had begun to claim his memory even earlier. How did you come to be so absorbed by the pursuit of his memory?

SHIMODA: When I was very young, I thought that my grandfather’s memory loss—or the manifestations of his memory loss—was funny. That he would forget people’s names or forget where he was, seemed like a kind of comedic performance. As I got older, and began to understand, the gravity—and the devastation—of his memory loss (as well as the loss of all of his faculties) overwhelmed and scared me. Part of what overwhelmed and scared me was thinking about how every moment of his life, and all the people and things he loved the most was going to be extinguished, one-by-one; that only an unfathomable and ultimately asphyxiating void would remain; and that it was an irreversible process that we, his family, had to witness. So much of his life was already inaccessible to me; his death was going to seal the fate of oblivion.

But the opposite happened: the moment he died, he came back to life, and slowly—over the span of decades—began to reveal more of himself, as if what he was not able to share while alive, was being given a new permission posthumously. What this really means is that my interest in my grandfather grew, because my love for him grew, and that I pursued my interest and my love for him through research, traveling, and writing.

IE: In your book, you visit Japan, seeking out places where your grandfather lived as a child, that have since disappeared. What do you think these pilgrimages meant for you?

SHIMODA: I have the feeling that no true pilgrimage ever ends. It is as generative and hopeful a feeling as it is despairing—something akin to Sisyphus pushing a rock up a hill only to have it roll back down, forever. There is also something of the story of Izanagi and Izanami [Japanese creation deities] in the feeling: Izanagi going down to the underworld to rescue Izanami, but committing the error of shining a light in her face, revealing her hellishness, and banishing her further. By that I mean: pilgrimages often feel like trespassing. In the case of The Grave on the Wall, ancestral trespassing. But then I think that pilgrimage is the fundamental work of a descendant of trauma, because the descendant is compelled or forced to return, over and over, to the source of that trauma, often without answers, and often without relief, although sometimes both can be invented through writing.

IE: Your grandfather also lived through the World War II incarceration. How did writing this book change your relationship to that history?

SHIMODA: Somewhere within the process, I discovered, or realized, that Japanese American incarceration was not an event bounded by time, or by the time stamp of WWII, but was—and very much still is—an ongoing situation and experience. I also realized, in moving through the various landscapes and shadows of my grandfather’s life, that his struggle is not over. Not only is his struggle not over for him, it is not over for me. Even though my grandfather lived through incarceration—in the sense that he did not physically die—he did not emerge from that experience untouched, nor with his life entirely intact.

I believe that everyone who experiences a trauma leaves a part, if not many parts, of themselves behind, and that where that part or those parts are left, forms a grave, and that each one of those graves is significant and revelatory and worth a portrait of its own. So in that sense, my relationship to JA incarceration is a relationship of imagining a panoramic portrait of innumerable and animated graves. The book I am writing now, which is a sequel to The Grave on the Wall, is on the afterlife of JA incarceration, and is, I hope, a much more articulate record of how my relationship to JA incarceration is changing, always changing.

IE: Your book also reflects on memorials, some of which are not related directly to your family history—a topic you have written about eloquently elsewhere. What did you learn about memorials in writing this book?

SHIMODA: So many of the memorials I have visited, whether in The Grave on the Wall or in general, have been tremendously difficult to figure out. It is not entirely clear what each memorial is memorializing. There is of course the marking of a place or an historical event, but I often feel that what is actually being summoned into memory and conversation is enigmatic, if not evasive. I write, in The Grave, about the 9/11 Memorial in New York City, which is an example of a memorial that, despite being both epic and intricately detailed, cannot possibly contain the variety of the meanings—and especially the consequences—of 9/11, and also cannot possibly contain the more honest and unsparing memorials to 9/11 which can be found in the destruction and death caused by America’s ongoing and seemingly endless “War on Terror.” One thing that I have been thinking about memorials—which I attempted to illustrate in the book—is that the true meaning of a memorial is what happens there.

IE: Japanese Americans, and other writers of color, are always writing about ghosts. You write about ghosts, but also about graves—surprisingly, a much less common motif. What did this book lead you to understand about ghosts?

SHIMODA: While writing The Grave, and especially while traveling (visiting sites, taking notes), I began to believe, with real conviction, that it is the living who haunt the dead, and not vice versa. There were innumerable times when I was overwhelmed by the acute feeling that I—the grandchild, the descendant, the living—was the ghost; that I was the restless, disquieted spirit; that I was the one who was transgressing the boundary between public and private space, collective and individual consciousness, life and death; that it was my soul that had been arrested, and that needed to be recuperated and brought home. I write, early in The Grave, about seeing my grandfather’s ghost—which is a true story—but it ultimately occurred to me that if my grandfather saw me, in the moment that I saw him, he might have thought that I was as uncanny and impossible, if not more. Because also: the living occupy a much briefer moment in the trajectory of time than the dead, so it would seem, just based on the numbers, that the living are by far the anomaly.

IE: Does caring for a young child change your relationship to ghosts? (I think it did for me, if only because of the extended sleep deprivation!)

SHIMODA: An incredible question! I am tempted to start a new notebook devoted entirely to thinking through it … The first thing that comes to mind—which is maybe not an answer to the question—is that when my daughter was in her first months of life, she would stare at the walls of our bedroom and smile. Sometimes there were shadows on the wall, or light from the window, though more often nothing. It reminded me of something my mother told me about my grandmother’s final day, on her deathbed: how at one point she stared out the hospital window and smiled. The reminder was also of the fact that my dying grandmother and my newborn child occupied points very close to each other on the wheel of life, both points being very close to the ancestral world, or at least very close to that form of receptivity and connection.