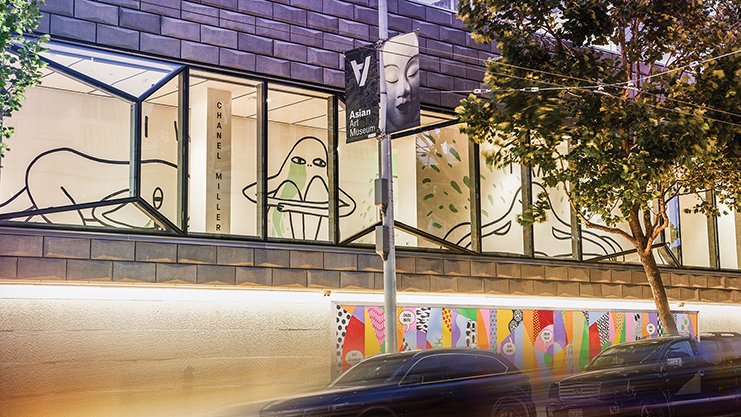 Known to the public as Emily Doe in the 2015 Brock Turner sexual assault case, she was confined to a vessel in which her identity was only ever tied to her perpetrator by society and media — robbed of the ability to move on in the world. But it is time to put away the Emily Doe because we know her name: Chanel Miller. 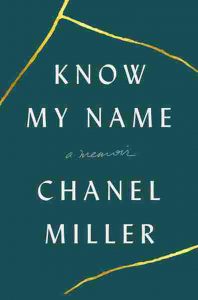 In her memoir, Know My Name, Miller reclaims her identity that has, too often, been erased and reduced. In 2016, the public heard of her powerful victim impact statement that she read directly in court to her perpetrator. With her memoir, released in late 2019, we once again see her stand as a persevering survivor, fighting the aftermath that is her legal battles and inner turmoil – but this time, with her own name. She speaks out as an Asian American, as a writer, author, artist, daughter, sister, friend, girlfriend, ally, survivor.

Miller intimately describes the events leading up to the life-altering violence and the shock and disbelief that follows when she wakes up with pine needles in her hair and her body barely hidden by a paper-thin hospital gown. She details the horror of what happens when a “golden” conscious star athlete takes advantage of her unconscious body, which should have signaled as a hard “DO NOT ENTER.”

While the memoir stems from the damage that one privileged white male has inflicted, we learn so much more about Miller outside of this one event. Through her wittiness and dark humor, her personality shines through more and more as we see her rebuild and reclaim her identity. She beautifully writes about relationships between an individual and loved ones, and also one develops with their own self during and after trauma.

She walks us through her battles against the inner demons that kept telling her to stay inside of bed but courageously pushes them out and moves across the country, where she walks the Providence streets and unleashes her once silenced anger against unwelcomed catcallers.

Through the emotional rollercoaster rides, we see not just fear and sadness, but the most resonating emotion of all: anger. Immense anger at the system that was built to empathize and side with the perpetrator, rather than the survivor. She writes about the impact that the event made on not only her, but those around her, such as her younger sister, Tiffany, who was still enrolled in university and had to keep rearranging her schedule to attend court. And yet, through her incisive detailing of trauma, her ability to create shows us more than just that. Miller shares the unique relationship between Tiffany and herself. One of my favorite moments to read was when they had to run over to the department store Ross to shop for appropriate court clothing. As they shop, we get glimpses of their interactions and attempts to hold onto their younger, goofy selves as Tiffany, puts on a lighthearted, childlike fashion try-on that erupts in laughter amidst their preparation for a serious, “adult” court hearing.

Miller’s detailed account of the case shows the current societal response to sexual assault is to focus on the potential faults of the victim — “what does she want, why did it take her so long, why now, why not then, why not faster.” Such words only further suffocate victims and do more damage in the already broken system that mistreats victims. Miller highlights how instead, “Why don’t we ask her how it was possible she lived with that hurt for so long, ask who taught her to never uncover it.”

People detach victims from the experience, and focus so much more on the logistics rather than how the person has survived such an experience and how we can provide better support. Miller teaches us how to approach conversations surrounding sexual assault through leading us through her internal and external trauma. She shares the empathy that she received from everyone, from the public letters to the little kind gestures she received from people at court and in the hospital. She received empathy from most people who could offer, except for the legal system. The legal system let her down — the same system that we were all taught to have trust in.

It is difficult, yet important to hear the excruciating details of her sexual assault and trauma that has silenced survivors for too long. Too often has Miller been known as the victim of the Brock Turner case. She has always been of something else and not her own individual person. Miller’s bravery and identity that lends an impactful voice in shaping young girls today. Thank you for teaching girls how to undeniably be girls.

The public did not ask her to write this book. Yes, she is recounting her experiences, but she is also providing a physical, tangible binding that others can hold onto. A sign that she is standing and screaming with all those who might need a little extra boost — screaming “I hear you” and that “sometimes the best we can do is tell you we’re still here and that should be enough.” I am moved by her courage to process her trauma and share this process with others. Thank you, Chanel Miller.

Not only is Chanel Miller a survivor, but also an author and an artist. As a Bay Area native, she is currently being highlighted by San Francisco’s 16th annual “One City, One Book” program, as its annual book selection. This citywide literary event encourages community members to read a book at the same time and participate in public programs throughout the months of March and April 2021.

Additionally, her inaugural artwork “I was, I am, I will be” is currently installed in the new glass-walled Wilbur Gallery of San Francisco’s Asian Art Museum and viewable directly outside on Hyde Street. Her tripartite wall mural, composed of three parts “I was”, “I am”, and “I will be”, can be viewed from either direction and represents the nonlinear healing process.

Whether you are driving or walking by, you cannot help but be captivated by these creatures. Her message extends beyond the walls that she was metaphorically confined to in the past few years. She is now stepping out as a survivor who is sharing her experience and integrating others into crucial conversations through her writing and artwork.

Miller’s artwork was the first to go up in the museum’s new transformation, an intentional act by Abby Chen, senior associate curator and head of contemporary art at the Asian Art Museum, to showcase this young, Asian American, female artist. By placing the mural in the glass-walled gallery, she hopes to bring hope to all those struggling on the dark, night-ridden streets amidst all the concrete government buildings in San Francisco’s Tenderloin. Miller’s representation of healing fills the street with a comforting presence that wherever you are in the process of healing, there is light and it will continue.

In addition to Miller, the new pavilion also features debuting artists such as Jas Charanjiva, a Mumbai-based street artist who was raised in the Bay Area, and Jenifer K. Wofford, a San Francisco-based Filipina American artist. The Asian Art Museum’s $90 million transformation includes a physical reconstruction, but also demonstrates the commitment that the museum is making to continue fostering artists across Asians and the Asian diaspora.

The museum recognizes these talented Asian American artists who were born outside of Asia, but remain marginalized and hyphenated, unable to be seen as part of the “American” art. Chen hopes to honor these experiences of Asian and Asian American artists and give them a platform to debut. Chen says that it would be incorrect to say that it is only in the museum’s plans to go outside the boundaries of name recognition, because that representation is already here and now. It is already happening both within and beyond the walls of the Asian Art Museum and she hopes this work continues to set the stage for the museum as trendsetters rather than trend followers.