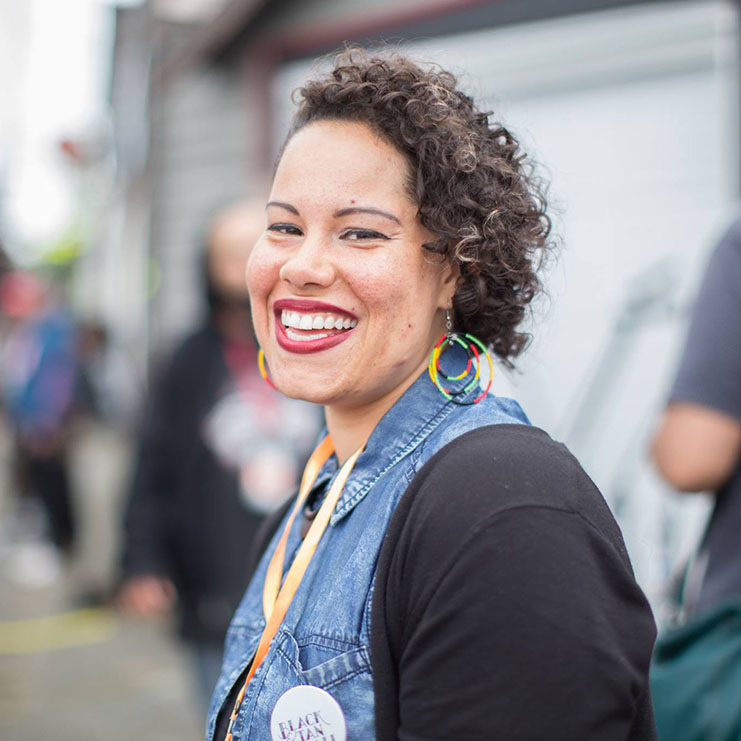 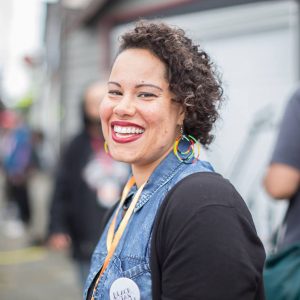 Nikkita Oliver’s campaign for City Council Position 9 — one of two seats representing the whole city — launched with a mutual aid exchange. People brought supplies like tarps, tents, hygiene products and clothing, and those who needed them picked them up. “By the end of the day, there was nothing left.” Oliver said. “It was beautiful.”

Oliver wants their campaign to be a model for what their City Council office would be like if they win election in November — one that collaborates closely with communities, meets people’s basic needs, and is willing to disrupt the status quo.

“I think it’s pretty messed up, the idea of spending over $300,000 dollars on a campaign while people can’t pay their rent or eat food or get healthcare,” Oliver said. “At the end of the day, win or lose, we can still be community organizing, and it’s ultimately community power that is going to impact the policies that happen in the future.”

Oliver, an attorney, artist and activist, serves as executive director of Creative Justice, an arts organization for youth vulnerable to the school-to-prison pipeline.

They are a member of the Decriminalize Seattle Coalition, a group which in summer 2020 successfully convinced a majority of the City Council to pledge defunding the Seattle Police Department by 50 percent. Oliver is a longtime member of the No Youth Jail movement, and was a founding member of the Seattle Peoples Party. They ran for mayor as a member of this party in 2017, but came in third in the primary.

Position 9 is an open competition after Council President Lorena González announced she will leave the seat behind to run for mayor.

The primary election is scheduled for August 3. The two candidates who receive the most votes will advance to the general election on November 2.

Oliver is skeptical of the notion of the city’s “recovery” from the COVID-19 pandemic. “Recover back to what? A failed social and economic safety net? We actually need to do the work of finally building an economic and social safety net for all residents.”

Oliver named the JumpStart Seattle big business tax as an encouraging move from the City Council — but one that falls short. “We could be generating $400 million dollars worth of revenue had we gone with the original tax Amazon proposal,” from Councilmember Kshama Sawant, Oliver said. The current proposal generates over $200 million dollars per year.

“What I’m hoping to see from the city council in the future is more backbone and boldness to push forward for progressive taxation, even if that means a fight,” Oliver said.

Oliver wants anyone facing eviction to have access to legal counsel regardless of their means.

They oppose sweeps of homeless encampments, and favor more rental support from the City to prevent evictions and homelessness, as well as tax incentives for landlords to forgive rents.

They would also work on public health and public safety models intended to prevent crises, and be alternatives to policing. Housing and mental health services would play a large role in this, Oliver said.

“Often people only access those services when they are in a time of immense crisis, and it is usually through engagement with the police or other systems that often criminalize behavior that really should be treated as a public health crisis.”

Coming up with public safety solutions that work for everyone won’t be easy, Oliver said. They said organizers in the CID are building solutions across generations and with business owners and nonprofits, and the City should join these conversations and come up with solutions.

For example, the City could invest in programs like the corner greeters program developed by the Rainier Beach Action Coalition. In this program, young people identified places known to police as crime hot spots, and set up tabling and beautification projects. Such programs could be expanded to the CID and beyond.

“If we can increase street traffic, beautification and services in areas like the Chinatown International District, we can substantially decrease the amount of harm or violence that is happening just by sheer presence,” Oliver said. “And that doesn’t then require an officer with a gun to be coming in and enforcing the law.”

“There is an issue, not just in the United States, but locally, around excessive use of force, racialized and violent policing, and that does harm to Black and brown residents in our community,” Oliver said. “I personally do not think policing at this juncture can be reformed,”

Instead, “Meeting basic needs is a way to decrease instances where people are choosing between survival or committing a crime,” Oliver said.

Oliver said the community should have more voice in deciding what gets built in the CID. Oliver said the International Special Review District design review process is not accessible enough.

“It often does not give the community an authoritative voice as much as it gives corporations and business owners kind of the cover or the veil, of looking like there was a process of including the CID community,” Oliver said.

As new housing is built in the city, density is not being distributed equally, Oliver said. Upzones were passed in several Seattle neighborhoods — “in the communities that are most at risk of displacement,” usually those predominantly Black and people of color, Oliver said.

If elected, Oliver hopes to significantly change Seattle’s zoning, to allow more housing and a variety of housing types. This would be done through the 2024 Comprehensive Plan.

“That should disturb us as a city that we are perpetuating the racist land use policies of the past,” Oliver said.

Oliver grew up in Indianapolis, Indiana, and has lived in Seattle since 2004. The No New Youth Jail movement was a turning point for Oliver’s life and politics.

Oliver served as a chaplain at the detention center in the early 2010s. At the time, “I thought that some kids should go to jail,” Oliver said.

But Oliver met a young person in detention who said both their parents were incarcerated, and had themselves been in and out of detention for six years. They felt they didn’t have hope of surviving on the outside world. “That was the first time I really asked myself, does this actually help, or does it hurt?” Oliver said.

Oliver became deeply involved in the movement. They were later struck by a meeting at the King County Council in which activists filled the room to make public comment. The County Sheriff was called for security.

“The elected officials, rather than trying to build relationships with the people in the room, they just shrugged us off and didn’t want to hear our voices,” Oliver said. “I couldn’t help but wonder, what would it have been like if the electeds had actually come down from the diais and sat with community members and talked, asked questions, tried to understand, why are you all so opposed to this youth jail?”

Oliver was inspired to run for mayor after visiting the Native American-led protests against the Dakota Access Pipeline at Standing Rock, and after Trump was elected. “A lot of people in our community just felt such an immense sense of apathy and fear about what we could or could not do at the federal level.”

One day, Oliver and a group of artists were brainstorming about running candidates who were aligned with community activism, focused on being accountable. For Oliver, the rest was history.

“I would say that I am sometimes a bit of a reluctant politician, but I am a very excited community organizer,” they said. “Because I believe that it is the power of politicizing, galvanizing and mobilizing communities that makes it possible for electeds to make significant change.”