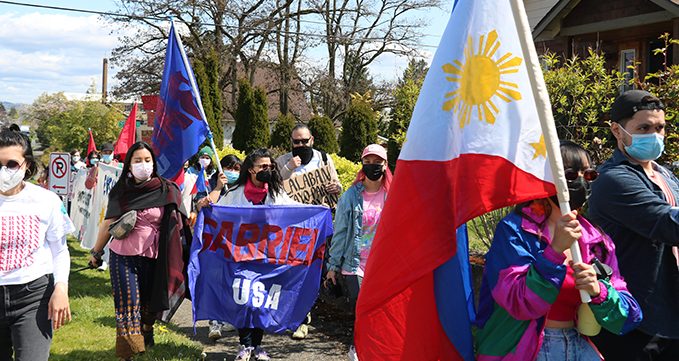 “Ang tao! Ang bayan! Ngyon ay lumalaban! The people! United! Will never be defeated!” and other chants echoed throughout Othello Saturday, April 23, as Filipino Americans walked from St. Edward Parish to Othello Park. Kababayan carrying Filipino flags and colorful banners calling for kababayan to fight for democracy in the Philippines.

Elle Mendiola, one of the 1Sambayan coordinators said this march was just one of many nationwide. They said the purpose of the walk and concert was to defend democracy in the Philippines and calling for clean and honest elections in light of the upcoming 2022 Philippine presidential election and the history of corruption in the Philippine government.

The presidential election candidate lineup has nostalgic ties to the history of the Filipino government. Ferdinand “Bongbong” Marcos Jr. is leading presidential polls despite being the son of ousted former dictator, Ferdinand Marcos Sr.

President Marcos Sr.’s presidency entailed suppression of the press and opposition, according to Nikkei Asia. Marcos Sr. also suspended and rewrote the constitution, restricted civil liberty rights and concentrated power in the executive branch among his closest allies. While in power, the Marcoses accumulated an estimated $5 billion to $10 billion according to the Presidential Commission on Good Government (PCGG).

More than 11,000 people were victims of human rights violations during 1972-1986, when Marcos Sr. declared martial law. 2,300 people were killed and 1,900 people tortured, according to The Philippines’ Human Rights Victims’ Claims Board.

Marcos’ presidency violently hit close to home in 1981 when two young Filipino labor reformers, Silme Domingo and Gene Viernes, were gunned down in their Pioneer Square labor union office on June 1. The men, both 29 years old, were Alaskeros, Filipino Americans who worked in the Alaskan canneries. They were vocal and influential opponents of both the racial discrimination they faced in the canneries as well as the Marcos regime back in the Philippines. Their murders were traced back to their corrupt labor union president Tony Baruso who was working under orders from Marcos.

“I think what makes this event so great is just being able to hear the perspectives of our elders who still have hope and are speaking out, taking action to support the fight against Marcos,” Mendiola said.

They said this event was different from past events since younger generations mostly participated. Mendiola also said that this event was the first time people with lived experiences during the Marcos regime joined their efforts in recent years.

“I feel like now is really the time that we’re getting to bridge that intergenerational gap,” Mendiola said.

Reminiscent of their own college days protesting in the Philippines in the 1970s under martial law, older generations joined young activists for the same cause that they had marched for decades ago.

When he was growing up in the city of Iriga, he had dreams of becoming a lawyer or doctor. However, once martial law was declared, he and his friends joined the U.S. Navy to escape unemployment and the poor living conditions many Filipinos suffered, a story that most Filipinos and Filipino Americans can relate to.

Millete said his quality of life growing up was good, but gradually as Marcos started to accumulate more wealth, he could feel it gradually becoming worse.

Even though Tito Jules acknowledged his privilege in living in the states now, he said “Iniisip ko na lang yung mga pamangkin ko.” (I’m thinking about my nephews now.) He worried for his family still in the Philippines that would suffer the same way he did under the first Marcos presidency.

He said this presidential election is crucial for the lives of Filipinos in the Philippines to change for the better. Like most people in this march, Millete wore pink to show his support for current Vice President and presidential candidate Leni Robredo.

“Alam ko gusto lahat ninyo iaangat yung mga buhay ninyo, don’t pass up this opportunity,” (I know that all of you want to have better lives) Millete said.

Jenilee Policarpio, one of the organizers of the event and a member of the Filipino Community Health Board and National Alliance for Filipino Concerns said she supports the presidential candidates that are pro-people and pro-democracy.

Policarpio said one of the biggest concerns in the election is that many absentee ballots have not been mailed or counted. She said this is a major concern since people like overseas workers should have the chance to vote.

“I’m here today together with the community because I think we’re all united, that we want to see a better Philippines for the next six years and beyond,” Policarpio said. “Hopefully after elections our community can still work together to address issues locally and abroad.”

Philippine presidential elections have historically been prone to fraud, with the previous President Marcos Sr. claiming he won the election before being ousted by the “People Power” Revolution, according to the New York Times archive.

There was a variety of ethnicities and age groups present at the march and concert with signs saying “Ilocanos for Leni-Kiko” supporting presidential candidate Leni Robredo.

Meesh Vergara, one of the organizers from Malaya Movement Seattle said Othello was one of the places they chose to walk since they had previously held the People’s State of the Nation (PSONA) there.

As community members and allies marched down Martin Luther King Jr. Ave, passerbys in cars honked and others came to cheer from their shops.

The concert featured speeches from community members and leaders, former activists during Marcos’s presidency and performances by a father-daughter duo that sang a resistance song “Bayan ko” and a choir performance from local women’s group, Gabriella.

Stephanie Gallardo, Rep. Adam Smith’s (WA-9) congressional opponent, had a table at the event. Filipino organizations have attempted to get Rep. Smith’s support for the Philippine Human Rights Act, which calls for U.S. commitment to international human rights by suspending security assistance to the Philippine military and police until violence under President Rodrigo Duterte ends.

“Sa aking hagang sa bubuhay ko siguro ito lang ang pagasa ninyo may iaangat yung buhay ninyo,” (For as long as I live, this is maybe the only hope that life in the Philippines will improve) Tito Jules Millete said.