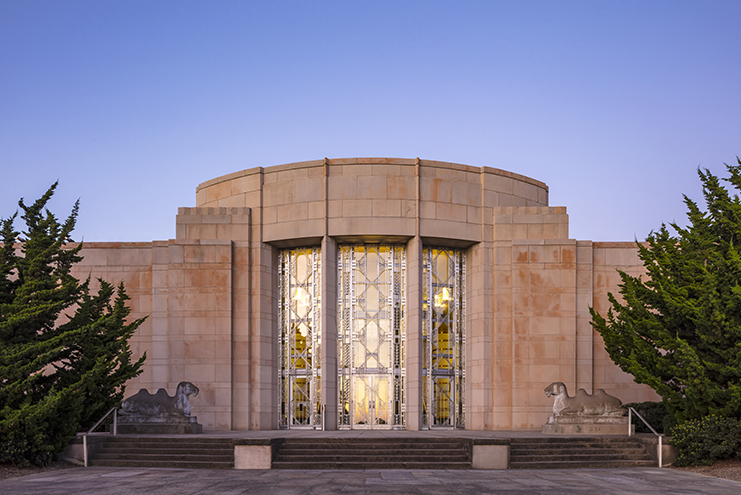 As the decorative aluminum Art Deco doors of the Seattle Asian Art Museum open to the public this February, visitors will likely feel a strong sense of familiarity.

At first glance, it seems not much has changed: the gold-filled Entry Lobby remains fit for a party thrown by Jay Gatsby, the connecting Fuller Garden Court still acts as the museum’s bright and spacious centerpiece, and galleries filled with Asian art await in nearly every direction.

Despite these constants, the museum Seattleites once knew has dramatically changed. Over the course of a 24-month-long renovation and expansion led by Seattle-based architectural firm LMN Architects, not a single inch of the Asian Art Museum went untouched.

With the addition of a 2,650-square-foot art gallery and much-needed structural upgrades, the city’s historic museum is ready to serve the public for decades to come.

Designed by Paris-trained architect Carl F. Gould of Bebb and Gould Architects, the Art Deco building first opened in 1933 as the original home of the Seattle Art Museum. That same year, the museum’s founder, Dr. Richard E. Fuller, donated the building situated in Capitol Hill’s Olmstead-designed Volunteer Park to the city. In 1989, the building was added to the National Register of Historic Places.

After the opening of SAM’s downtown Seattle location, the site was reopened as SAM’s center for Asian art in 1994.

For nearly 90 years, the museum went without an update. Although three small expansions took place between 1947 and 1955 to accommodate SAM’s growing collection, the building had never been renovated.

Before closing in 2017, the museum operated with its original 1933 boiler and mechanical electrical systems. It had no air conditioning or humidity control—two necessities for ensuring the displayed art’s protection—and was not in compliance with seismic codes and ADA accessibility standards.

With the museum’s long and illustrious history, preserving and restoring the building’s 20th-century features was equally as important to lead architectural firm LMN Architects as was bringing the building up to code.

“Our goal was to have someone walk through the museum’s doors and not be able to tell what we had done,” said LMN architect partner Sam Miller. “We wanted to give the building a new life for the future but keep the original historic space, and visitors’ experiences of the space, the same as before.”

Founded in 1979, LMN Architects is responsible for over 700 projects across North America including the University of Washington Paul G. Allen Center for Computer Science & Engineering, Benaroya Hall, McCaw Hall, the Seattle Central Library and the Washington State Convention Center.

LMN Architects was first brought in to renovate Seattle Art Museum some 15 years ago. As the firm’s work on renovating SAM’s downtown headquarters came to a close, museum executives set their sights on remodeling their Volunteer Park location.

The museum conducted preliminary studies with LMN Architects, surveying the building for structural and mechanical issues. Following a brief hiatus in 2008 as a result of the global recession, the project found new life with the appointment of Kimerly Rorschach as SAM’s director and CEO in 2012 and an expansion was incorporated into the planned renovation.

The project was not without controversy, however. In 2017, a group called Protect Volunteer Park launched a campaign against the museum’s planned expansion on the basis that it was not approved by Seattle voters and violated the original vision of the park. Despite these protests, the Seattle City Council approved the plan and the expansion broke ground in March 2018.

Along with a new 2,650-square-foot gallery, the museum’s expansion includes additional programming space, a dedicated education space, an Asian art conservation studio available for public viewing, a community meeting room, a new art elevator, and a glass-enclosed Park Lobby. Altogether, the extension spans all three floors of the museum.

The building’s original exterior sandstone façade was cleaned and preserved while the translucent film on the Entry Lobby’s Art Deco metalwork was removed to allow for more natural light. Three fountains—one outside, two inside—were restored along with two Olmstead-designed outdoor pathways surrounding the museum.

The site’s expansion also reinforces the building’s relationship to the park without disturbing its natural setting. The Park Lobby’s panoramic views showcase the park’s green landscape and bring visitors eye-to-eye with a towering beech tree.

“You can either take those sorts of condition and think of them as a challenge or you can take them as a really terrific opportunity,” said LMN Architects partner Wendy Pautz on designing the expansion around the tree. “The Park Lobby is built so that you feel like you’re up in the canopy of trees. From there, you share a very different relationship with nature than you do anywhere else in the park.”

Daylight played another crucial role in the museum’s expansion and renovation. In the original building, skylights were used to illuminate nearly half of the museum’s galleries. While this proved aesthetically pleasing, the artwork displayed in the galleries was prone to damage by excessive exposure to UV rays and sunlight. As a result, the overhead skylights were often blocked off to protect the art.

To mimic the daylight that once flowed throughout the galleries, LMN Architects introduced artificial skylights that can be adjusted by temperature and intensity depending on the needs of the particular gallery. These lights recreate the sensation of daylight from above without jeopardizing the art. And Seattle-raised and now Brooklyn-based Kenzan Tsutakawa-Chinn has a new lighting installation that covers the ceiling of the Garden Court area.

For 23 years, the Asian Art Museum occupied a building that was designed to house a different museum. Now, with a massive renovation and expansion led by LMN Architects, SAM’s extensive Asian Art collection can be prominently displayed.

Although the art hanging on the gallery walls is sure to attract plenty of visitors, the museum’s historic architecture is a work of art in its own right.

“To work on a historic building like this is a real privilege, and it’s something we take very seriously,” said LMN Architects partner Sam Miller. “This building is a part of Seattle’s legacy and we hope the public will see that we treated it with care and respect. We only made it better.”