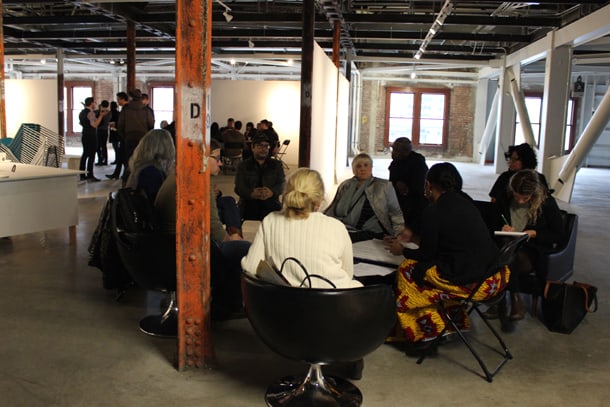 The Office of Arts and Culture is getting ready to move out of their current home in the 17th floor of the Seattle Municipal Tower into the second and third floors of King Street Station. The move is scheduled for next year, but representatives said that there is no strict timeline as they strive to “do it right.” The Office has been using the city’s Racial Equity Toolkit to frame their meetings, which illuminates the goal of the new space and programs to be accessible and supportive of new artists, artists of color, women, and other marginalized groups.

The first focus group and public meeting was coincidentally held this year on May 10, the 100th anniversary of the opening of King Street Station. Since then, the Office of Arts and Culture has held 16 meetings.

Pioneer Square-based architecture firm Olson Kundig presented its design plan to revamp a total of 17,130 square feet of King Street Station during the public meeting on November 5. Reflecting the feedback the Office of Arts and Culture has received over the last several months, the design leaves a lot of room for flexibility of programming and use. According to the firm’s design statement, the upper floors of the station will be transformed to include:

• Grey Box: An intimate 1,720-square-foot enclosed area that can be used for smaller installations and performances.

• Living Room: A 2,450-square-foot common area on the third floor that will serve as a welcoming space and information hub for visitors, and a meeting space for artists and community.

In the past, the third floor space has held art exhibitions and dance performances.

What this means for the Chinatown International District

During the Chinatown International District focus group meeting in October, the attendees were a mix of those who live and work in the neighborhood as well as artists who frequent the district. Mayumi Tsutakawa, a former grants manager at the Washington State Arts Commission, was present there and at prior public meeting. She said that she is excited for the potential collaboration of the Office of Arts & Culture and the CID community, but is concerned about the barriers people in the CID would face to King Street Station. One such barrier is physical.

“The Pioneer Square people do not have a physical barrier to King Street Station. It’s very close by, and there’s no big street to cross and it’s just very, very easy for them to go up there,” Tsutakawa said. “But for the people in the International District, especially our newcomers and people who don’t speak English, the barrier of 4th Avenue with the train lines, light rail station, the Vulcan building, all of those things that are actually physical barriers for people in the ID to have easy access and to feel comfortable to just sort of wander down to the King Street Station.”

For the new facility to be attractive to the CID community, Tsutakawa said, the Office of Arts and Culture needs to figure out how to eliminate those barriers as much as possible.

Tsutakawa also said that it’s important for the CID community to meet up and discuss what they want out of this new space for the neighborhood.

Equity as a project frame

Erika Lindsey, the communications manager at the Office of Arts and Culture, said that staff has been “delighted” at the participation of diverse stakeholders—artists, people of color, of business owners.

“We also feel good because people have come up with such really fascinating ideas that on our own as a staff I don’t know we would have come up with,” Lindsey said. “It’s then really great to hear from everybody on how we can create a welcoming space so we create programs that people want to come to, how we can involve the neighborhoods and the art community and Seattle community as a whole.”

While previous focus groups and public meetings were imagining what’s possible for the space to serve a diverse population of artists, the last meeting was a brainstorming session on how the space should be governed. Attendees, facilitated by Office of Arts and Culture staff and Seattle Art Commission members, suggested different programming models that would work best in making sure that the office’s grant programs are fair.

Lindsey said that using the City of Seattle Racial Equity Toolkit as a framing device has helped the office to envision and actualize a better space and community.

“In a lot of ways, it’s helped define for us why we do most of our work in the city itself and also in creating the new space,” Lindsey said. “How can it benefit the greatest number of people? I remember when we first sat down with the Office of Civil Rights talking through the Racial Equity Toolkit to get a better sense of how to use it in our project, the person we were working with, [Policy and development lead] Darlene Flynn was saying, ‘The idea is that you talk to people with the most barriers … if you remove their barriers, then you remove everybody’s.’”

All of the feedback will be evaluated before the Office of Arts and Culture moves into King Street Station next year, though Lindsey said she’s expecting some trials and errors as part of the process.

“That’s kind of an interesting thing because we’re soliciting all these ideas but we also wanna manage everyone’s expectations,” Lindsey said. “So we’ve been sort of asking everyone to hold us accountable but at the same time give us time to get this done right.”