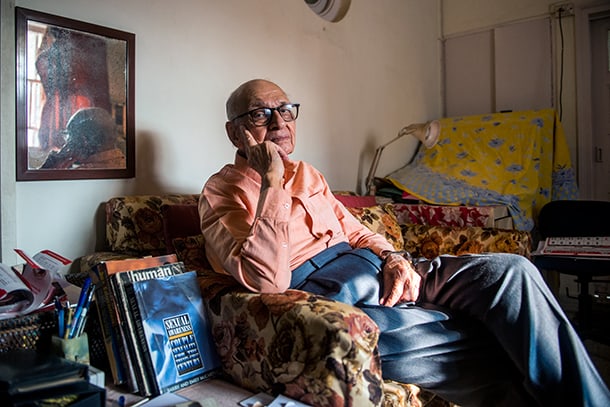 For nearly a decade, nonagenarian and retired gynecologist Dr. Mahinder Watsa has been writing a daily sex column for the Mumbai Mirror newspaper. His candor and humor are legend amongst the city’s urban dwellers – particularly youth, many of whom have memorized which page the column usually falls on. In Ask the Sexpert, director Vaishali Sinha explores the nuances of India’s conservative mores – the lack of sex education, the pervasiveness of wives’ tales regarding contraception, the expectation for women to be virgins at marriage, etc., while granting unprecedented access to Dr. Watsa himself, a pioneer who is not without detractors.

Dr. Watsa receives upwards of 60 questions a day, largely from men whose concerns range from erectile disfunction to contraception to wanting to know how he can be sure that the woman his parents have arranged for him to marry is a virgin. The messages, sent anonymously, convey strong senses of vulnerability and insecurity, revealing a widespread culture of repression and ignorance of how the reproductive system works. As a practicing physician in the 1970s, Dr. Watsa spearheaded the country’s first ever sex education program, though today some states have banned such curricula from schools. When young people aren’t receiving information on sexuality from their parents or teachers, they rely on Dr. Watsa’s column.

During a radio interview, when the host asks how it feels to be India’s foremost sex expert, the doctor dryly replies, “Oh very embarrassing, no doubt.”

Sinha’s documentary portrays its subject as a radical – and in many ways, he is. Despite the fact that the majority of readers who write in to the column are men, the Mumbai Mirror’s editor-in-chief notes that Dr. Watsa incorporates the importance of women’s rights, agency over their bodies, and pleasure in his responses. And despite the numerous obscenity cases brought against the column over the years, he persists in his work, and even published a book in 2015 titled It’s Normal!.

The main antagonist in the film is a prominent academic and social critic, who claims Dr. Watsa’s column is promoting sex and immorality amongst the new generation. While it’s useful for Sinha to include an opposing perspective, the academic mostly just comes off as a hysterical conservative. For the most part, though, the general public seems enamored and appreciative of his work; whether he’s out and about on his daily walk or at a reception, young people often approach him to express gratitude and admiration and to take a selfie with him.

Little focus is given to Dr. Watsa’s personal life, though brief snippets convey a man whose family often came second to his work. Mrs. Watsa passed away some years ago, and in hindsight the doctor regrets not being a more present husband. Their children understand the importance of Dr. Watsa’s work, but likewise reflect that he wasn’t around much when they were growing up.

Succinct yet powerful, Ask the Sexpert is an inspirational and entertaining story of a man’s journey to lead the misguided masses to enlightenment, and to embrace and understand our bodies and desires rather than condemn them.