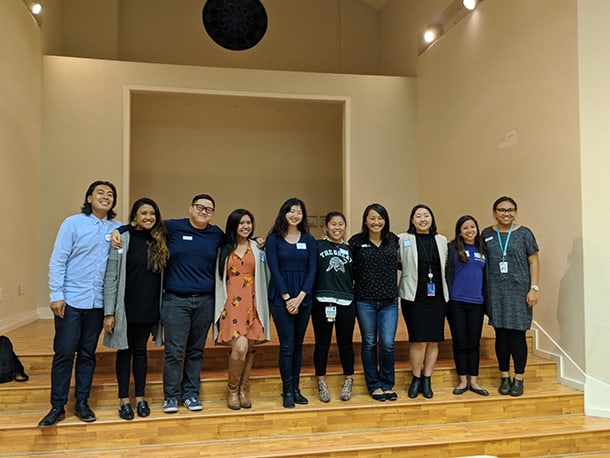 “We cross generational lines to unite in the shared vision of developing leaders to shape and secure our collective future as a community, and, as we at ACLF fondly think of ourselves, a family,” says the online invitation to the “Living Legacies”-themed gala.

Though Alex Johnson, current ACLF president and 2014 alumnus, says the dinner will not technically have any new elements marking the milestone, the gala will mark the past two decades’ progress in building this family of community leaders, and look forward to the future. Strategic goals include engaging and integrating more community groups across the API spectrum, re-engaging over 200 ACLF alumni with the mission and each other and continuing to support how community leadership crosses all sectors.

Randon Aea, former ACLF president and 2011 alumnus, said over a campfire at the recent Refuge Outdoor Festival, “There’s no one else doing this in the state focused on social justice and empowerment of Asian American leadership. ACLF is the leadership funnel in our community.” For the past seven years, ACLF alumni have enjoyed an annual camping trip together. Alumni also reunite at the ACLF Community Breakfast and graduation dinner. This past summer, ACLF introduced a community potluck.

ACLF’s Community Leaders Program trains and graduates one new cohort per year, usually between 8 to 12 people. Participants commit to attending biweekly meetings, opening and mid-year retreats, and contributing to a community leadership project that addresses a major issue in the API community or serves a specific organization. The ACLF website details class projects from 2011 to present, ranging from the arts revitalization of the Chinatown/International District to how to bridge the API leadership gap.

For a perspective on how the ACLF experience can change lives, The International Examiner interviewed 2017 alumna June Liu, who now volunteers on the anniversary gala organizing committee. A Florida native, Liu said she hated everything about being Chinese in Florida, which is a predominantly white state. “I didn’t have many cultural ties, or a cultural identity, in Florida, but when I moved here [to Seattle] I wanted to be part of a community, which is where ACLF opened those doors for me.”

The International Examiner: How has ACLF changed your connection to the Chinatown-International District (C-ID) and API community?

June Liu: I’m slowly becoming more integrated since I graduated. There’s the [ACLF] name recognition and tie to the community. For example, I work at El Centro de la Raza, and went into the C-ID to see if I could revive any relationships there, mostly in the name of the “Four Amigos,” or “Gang of Four.” I was talking to a new contact [who had been through ACLF], and we had immediate report because we all had special place in our hearts for ACLF. He suggested I talk to Uncle Harry, and it was nothing forced… but I felt I was included not just in Seattle but specifically the C-ID.

IE: What kind of values does the program teach you?

JL: It helped me cement my values. I had some in mind that I grew up with, like loyalty and inclusion, but when I got together with my [ACLF] cohort mates, I discovered other values that were important to me, and had they not been there, I don’t think I would have discovered them as quickly as I did, so I learned a lot about courage and bravery. Even though the material we were learning and exploring was engaging and interesting, I got more out of it than I did social justice wise.

I hated being Chinese before. You know how kids can be so mean. I was in Southern Florida. I was given the name Angela when I first came [replacing my birth name Yanjun], but since doing through the program why would I continue going with Angela when that name was given to me. Like I didn’t feel the connection anymore. I feel closer to myself and the beliefs my parents were trying to instill in me. When I first interviewed for the cohort, I was on the fence, I wouldn’t always answer to June, l’d quickly say my name… there was this hesitance to embrace June. But my cohort knew that about me but they always saw me as June. There was that social acceptance.

IE: What do you appreciate the most about ACLF?

And I would seriously roll my eyes. I thought, what is a family anyway and how could you possibly be a family with random strangers who happen to be in same cohort? But then I saw them having my back, cheering me on, sending me job opportunities for work I wanted to do, how they were totally my moral support. So now I’m hoping I can pay that back by serving on the committee.

ACLF is recruiting its next class for the Community Leaders Program, which runs October to June. Applications are accepted on a rolling basis through the website: aclfnorthwest.org.