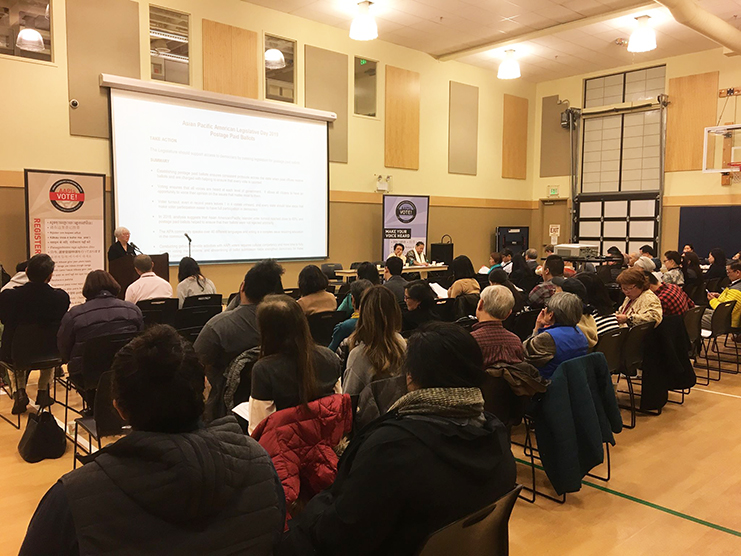 The Asian Pacific Islander Coalition’s legislative agenda in 2020 will include a focus on preventing immigrant court data collection and securing dental coverage, according to the group’s meeting on Wednesday, January 22, 2020.

Dozens of organizers and community members sat around the half-court line in the gym of  Asian Counseling and Referral Service (ACRS) to give feedback and hear a presentation by activists, experts and policy analysts on the Asian Pacific American (APA) priorities for this year’s legislative session in Olympia.

The King County community briefing intended to collect feedback from community members to ensure that the agenda represented the interests of Washington’s diverse APA population.

In addition to legislative tasks, the top APA budget priorities are to fully fund both the Limited English Proficiency pathway for non-native English speakers and the Legal Defense Fund which provides representation to individuals at risk of deportation who cannot afford service, according to ACRS policy analyst Joseph Lachman.

Attendee Jeffrey Miguel Acido moved to Seattle from Hawaii in September, and said that he hears many of the same issues talked about in both Washington and Hawaii, like the need to have space for people of color and elders.

“Communities face the same issues in each state, it feels like. The context is different but the issues are the same,” he said. “It’s always nice to sort of see what the strategies and approaches are for each organization or coalition, and I’m trying to find ways where I can help out, and how they can use another person or another voice.”

APIC legislative priorities are developed every year by a variety of organizations representing Asian Americans in Washington and is a dialectic process heavily influenced by community input.

Wednesday’s forum was hosted at ACRS in partnership with the Asian Pacific Islander Coalition, which has six chapters across Washington state in Snohomish, Pierce, Yakima, Spokane and South Puget Sound.

Each chapter hosted its own respective community briefing, which functions both as a presentation of the issues and a hearing of public opinion to ensure that lobbyists are focusing on issues that matter to the communities they represent.

Generating feedback is part of why it’s beneficial to do forums as opposed to less resource-intensive online dissemination, according to ACRS director of civic engagement and policy Shomya Tripathy.

“The briefings are kind of like a way for us to talk about the policy issues in the state because we want to make sure that the issues that we’re advocating for at the state are fully community-driven and have feedback from the full diversity of the API community,” she said. “And also for people to learn more who aren’t necessarily policy-heads.”

ACRS policy analyst Joseph Lachman also added that these forums allow for participation from people who may not be active online.

King County’s community may not have been the best example, however. Acido noted that the majority of attendees were not the community members that the briefing intended to reach.

“I actually was hoping to see if there were more community members that would attend. It makes sense that it’s organizers and head of nonprofits that attend but I was hoping for some more laypeople to attend,” he said. “That’s not a criticism but a hope that more people will attend.”

Organizers asked community members to come forward if they had been personally affected by some of the proposed legislative issues, and Acido noted that these personal stories may also help increase civic engagement.

“It’s easy to pull up information but I think a greater invitation of change is an invitation to have a relationship with either the bill or the sponsor,” he said. “It’s always nice to see face-to-face. It costs a lot more and is a lot more challenging but in the long run the impact is better.”

APIC will continue to hold community engagement events throughout the legislative session in Olympia, which started on January 13 and ends on March 12. Several bills on the agenda have already had public hearings, and resource focus will depend both on timing and on the political will of the legislature, according to Lachman.

Lachman said that the best way to get involved is to sign up for the APIC mailing list, and guest speaker Allison McCaffree said that writing to your representative is an important way to show that there is political will behind these issues.

APIC will also be speaking with the governor’s office on January 28 in Olympia. Organizers were happy with the turnout and hope to continue using community input to guide the legislative agenda and discussions at the capitol.

“When I feel like you all hit us with these hard-hitting questions it keeps us accountable to our values,” said Tripathy at the end of the briefing. “All of us know that this work is messy and complicated and the legislative session is like one tiny little part of how we do this work. It’s our values and our community that grounds us.”