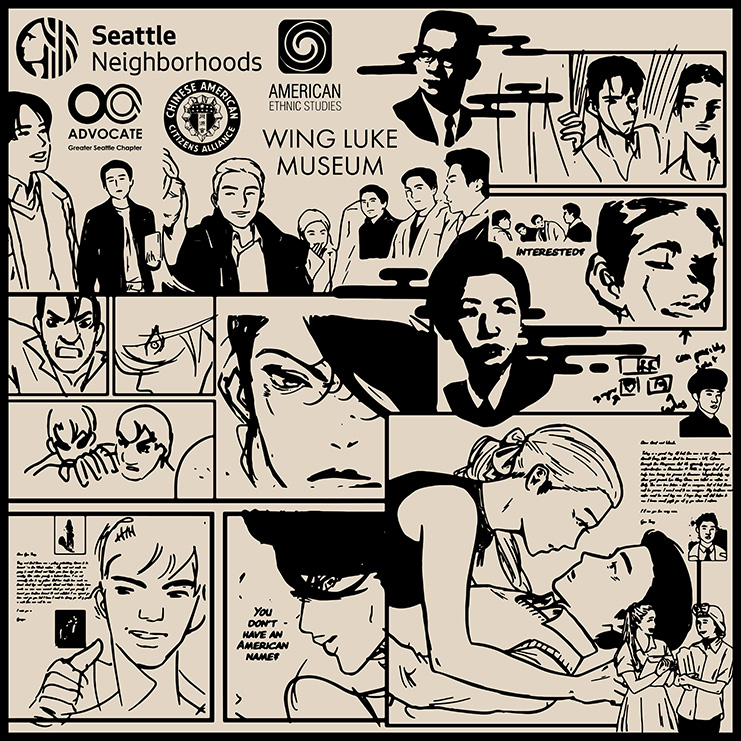 When Duke Ellington wrote the song “In a Mellow Tone” in 1939, he never imagined that this tune dedicated to joy would be the foundation for a comic novella about the role played by Asian Americans during World War II. But In a Yellow Tone is the 222-page book of stories and illustrations developed by University of Washington students whose initial film production, about Chinese American World War II veterans who received Congressional Gold Medals in 2020, was interrupted in March 2020 by the COVID-19 pandemic.

True to its origin as a film, the comic novella In a Yellow Tone is constructed in dramatic format, with 16 acts that present the stories of several veterans and their families, as well as a framing structure consisting of two contemporary students, Collette and Cyman, who lead us through their discovery of the artifacts – including letters, photos and journals – that tell the veterans’ histories.

Some of these veterans are the direct ancestors of students who participated in the project. “There are many sections of the novella that I love for different reasons,” Wen Eckelberg mused, “including Act 6, which features my great-grandfather and an incident he encountered in the military, which led him to become a personal bodyguard.” That great-grandfather was Quin Woo, who served in the U.S. Military Police Corps.

The project was supervised by teaching professor Connie So, in UW’s American Ethnic Studies department. “In September 2020, the project leads, brainstorming a way to complete the project despite the ongoing pandemic restrictions,” she reported, “decided to salvage the substantial amount of existing film footage by converting its frames into graphic illustrations for a comic novella.”

So reports that there were two overlapping committees, comprising 30 students total, responsible for In a Yellow Tone, one for the film from November 2019 to March 2020, and another for the comic novella from October 2020 to July 2021. “Notably, there were five people who helped write, edit, film and direct the movie, and stayed to work on the illustrations and narrative for the comic novella,” she said, listing Wen Eckelberg, as well as Han Eckelberg, Johnny Do, Heidi Tandiono and Tommy Tran. “Fortunately, for the comic novella, this core group was joined by Maeson Dewey, Brooklyn Hose and Caroline Natsuhara.”

In creating the novella, each student took on different tasks or Acts. “Since I was part of the cast when In a Yellow Tone was being filmed, I wanted to try and preserve the emotions that all our actors poured into the film in my illustrations,” Tandiono said. “Digital artwork is not something I had typically done before this project, so it was a chance to really explore.”

Meanwhile, Wen Eckelberg had written part of the film script and had planned to portray one of the leads, Ginger Lee. “When we transitioned to the comic novella format, I assisted in editing the illustrations on several of the letters and helped Han Eckelberg in the final stages of revising the story and book layout,” she said. “It was amazing to see everyone’s hard work and beautiful illustrations come together.”

Concurrently, writer and researcher Maeson Dewey worked with illustrator Caroline Natsuhara on the biographical and historical inserts between the Acts. “I wanted to make sure readers could grasp how amazing the people highlighted in the inserts are,” Dewey said. “This was challenging as I only had a certain amount of space to write on all of their achievements, so selecting what information to include on people like Wing Luke and Hazel was somewhat difficult. However, Caroline really helped out by drawing multiple pictures for single inserts, which added another page for more information to be written.”

Bringing all of these elements together was the job of Han Eckelberg. “As the director for In a Yellow Tone, from film to comic, my main priorities were to make sure each artist had a positive project experience, and that the film can translate into comic book form,” he said. “My responsibilities were to build page templates and storyboards for Heidi and at times Brooklyn, collect 1940s images for background references, finalize the script from film to comic book form, insert all speech, narration, and translation text for each page, design the book layout, and communicate with the printers.”

He reports that the final production process, including editing, proofing, and finalizing all of the text graphics, was long and tiring, but that advance planning eased the task. “During my first initial proofing of the script, we did have ‘missing scenes,’ or scenes that were now needed because it’s in comic book form,” Han Eckelberg recalled. “This was towards the middle-end of the project timeline, but everyone worked diligently and were very professional in meeting deadlines.”

This diligence, according to Hose, arose out of the satisfaction that the student-artists found in their work. “My favorite, most resonant act of the book I would say would be Act 5, Scene 4,” she said. “Not only am I a sucker for romance, but I also find it even more potent when BIPOC, including AAPI, are centered and highlighted as the protagonists in stories, especially love stories where the other love interest isn’t white.”

For Hose, love stories are not peripheral to Asian American history. “It sends a counter-narrative to the ones that have been enforced on us for so long, that we are not just side characters, or the protagonists’ emotional dumping teddy bear,” she said. “It sends this counter-narrative that we are deserving to be the protagonists in our stories. By defying racist tropes, it humanizes our experiences, and legitimizes and honors our reality.”

Tandiono feels a similar draw to Acts 4 and 9. “Act 4 brought on a sweet RomCom cliche scene with the high school dance,” she said. “I think a lot of manga and K-drama enthusiasts will appreciate the scene.”

But, as an artist, Tandiono found that Act 9 stirred her emotions the most. “Act 9 contains a lot of partially filmed scenes,” she described. “I felt this Act ultimately portrays the hardships and heartache that come with separation from loved ones, which is something I really connected with.”

The team discovered the fortitude with which Asian Americans pursued their lives during World War II. “My favorite part of the book is Act 3 where Ginger beats up a rude customer at the club,” Dewey said. “I’m always for strong Asian women and action scenes.”

Strength in the face of adversity is a common element in these stories. “Every Act involving Jacob Yamamoto’s character is my favorite because he is the perfect wholesome and humble big man on campus,” Wen Eckelberg said. “This is why Jacob’s death in Act 14 is so devastating.”

But, for Eckelberg, this loss emphasized the importance of community. “I think his character really helped with understanding how painful it would have been to lose a loved one in the war,” she said. “Jacob Yamamoto represents our dearest friends, classmates, neighbors, and brothers, who we would never expect or wish that to happen to.”

Eckelberg says her most important takeaway was the importance of sharing and learning about history from an Asian American perspective. “While it can be difficult to hear about the injustices our ancestors faced in the past, it is empowering to learn about our strength and resistance to racism so we can use that knowledge to continue the effort against racial injustice in the present,” she said. “I hope that our comic novella can be a fun, yet educational, way to share Asian American history to a larger audience and counteract the many false stereotypes that are propagated and perpetuated in the media about our community.”

Tandiono agrees. “Growing up in the south, there wasn’t a whole lot of representation for Asian Americans,” she said. “I was born in the suburbs of Arkansas and a lot of my understanding of the Asian American history there comes from my parents and my own personal experiences. I spent a lot of time having to read up on the multiple histories that interplay in the United States because in school, it was often skipped over.”

On a more personal note, Hose says she learned about how the perfect can be the enemy of the good. “There’s a lot of pressure sometimes that we put on ourselves to be amazing, and to do amazing things or to fit others expectations of ourselves, BIPOC especially,” she said. “We put a lot of expectations on ourselves to outperform, to meet standards to be accepted or exceptional.”

Working on In a Yellow Tone helped Hose to focus on the importance of being mellow. “I think it’s even more revolutionary to show up and accept yourself for who you are at your point in the journey, because it’s enough,” she said. “In fact, it’s more than enough. This message of self-love, I feel like, is something that should be emphasized for BIPOC.”