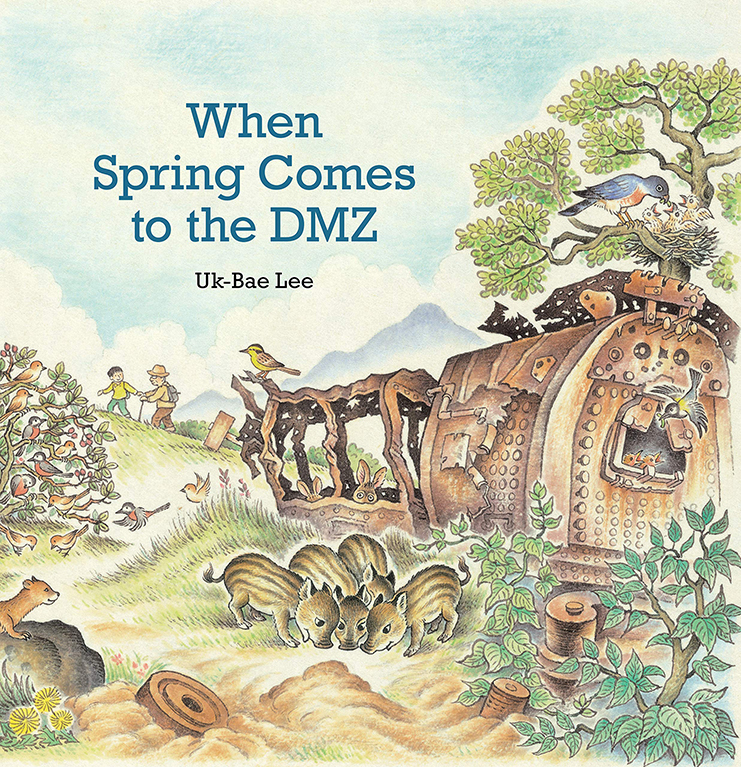 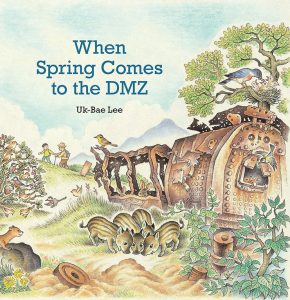 When Spring Comes to the DMZ : By Uk-Bae Lee (author and illustrator)

War is created by people. Many young children do not know much about war unless they are refugees from countries such as Vietnam, Cambodia, Korea, Syria, Iraq and Afghanistan.

This is a beautiful picture book about moving people away from war to peace.

The story is about Grandfather who longs for his home when he was a young boy. At different times of the year, he climbs many stairs in the buffer zone so he can see beyond the DMZ, the demilitarized zone that separates North and South Korea. He wants to be with his family in North Korea.

The DMZ was created in 1953 after the Korean War split what was one country into two halves, splitting the people into North Korea and South Korea. This heavily militarized border area is still there today.

In the spring, summer and fall, Grandfather sees war games, where soldiers of the North and South alike threaten each other with tanks and rifles.

Unlike Grandfather, seals, ducks, fish and deer frolic in waters, meadows and fields known as the DMZ. Though there is razor-sharp fence along the border zone between the North and South, animals keep coming back every spring to swim in the waters or eat green shoots in the area. The animals do not know war, only people.

Grandfather wishes for peace. Then the DMZ fence could be opened so he could go home to his beloved country to the North.

This is an excellent picture book that parents, teachers and others can use to talk with young children about the DMZ and why North and South Korea exist. This book emphasizes the importance of peace. 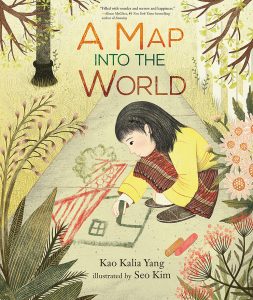 A Map Into the World: By Kao Kalia Yang; illustrated by Seo Kim

A young Hmong girl, Paj Ntaub, learns about life by watching the seasons and what she sees in life. Her family moves to a new home and she helps her grandmother (Tais Tais) hang a story cloth on the wall about the move of the Hmong to the United States.

Her mother’s tummy is as large as a watermelon. Her mother brings new twin brothers home from the hospital. She tends a garden with her grandmother and often waves to the old couple across the street.

Summer turns to fall and the fan-shaped leaves from the gingko trees turn yellow and cover the yard and street. In the winter, she notices that the old woman is not at her home any more. She has died.

But in the spring, Paj Ntaub sees the light coming back and a worm in the dirt. Everything begins to look green. She sees the old man across the street push the bench outside and sit on it by himself. She makes a map on the old man’s driveway with chalk. It is a map into the world showing tear drops, a yellow gingko leave, her worm, people in her family, and their houses. She also draws an arrow showing that there’s more to come in life.

This is a gentle, quiet story about the year of a young girl who learns about life, death, family and friends. I wish there had been more discussion of the story cloth that is an important art form in the Hmong community. 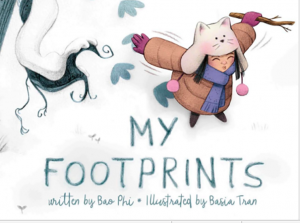 My Footprints: By By Bao Phi; illustrated by Basia Tran

Thuy is a lively and spunky young girl who rolls around in the snow and makes many footprints in the snow. Sometimes her footprints look like a bird’s in deep snow. She also makes footprints that look like an elephant or a grizzly bear. Thuy wants to be a powerful and courageous monster.

Why? Kids at school are laughing and pointing at her. They won’t stop. Thuy is sad. She tells her moms about how she is being bullied at school and that she does not know what to do.

Momma Arti and Momma Ngoc play in the snow with her; they pretend to be different animals together like a phoenix. A phoenix rises out of ashes and is powerful. They also play being a Saraha. It is part lion and part bird. The Saraha is fearless. But Thuy makes up a new animal called Arti-Thuy-Ngoc-osaurus. She combines the names of her moms with her name and they make the footprints of this new brave and loving animal together in the beautiful white snow. They are a strong family.

Basia Tran is a special illustrator. Thuy and her moms look like real Asians, they are not stereotypical caricatures. Tran draws real emotions in the faces of her characters too. We need more picture books like this one where the illustrations are accurate portrayals and the book tells the story of how we can help children deal with bullying.

Bao Phi, the author, has written another exceptional picture book, A Different Pond. His story telling and writing are exceptional.