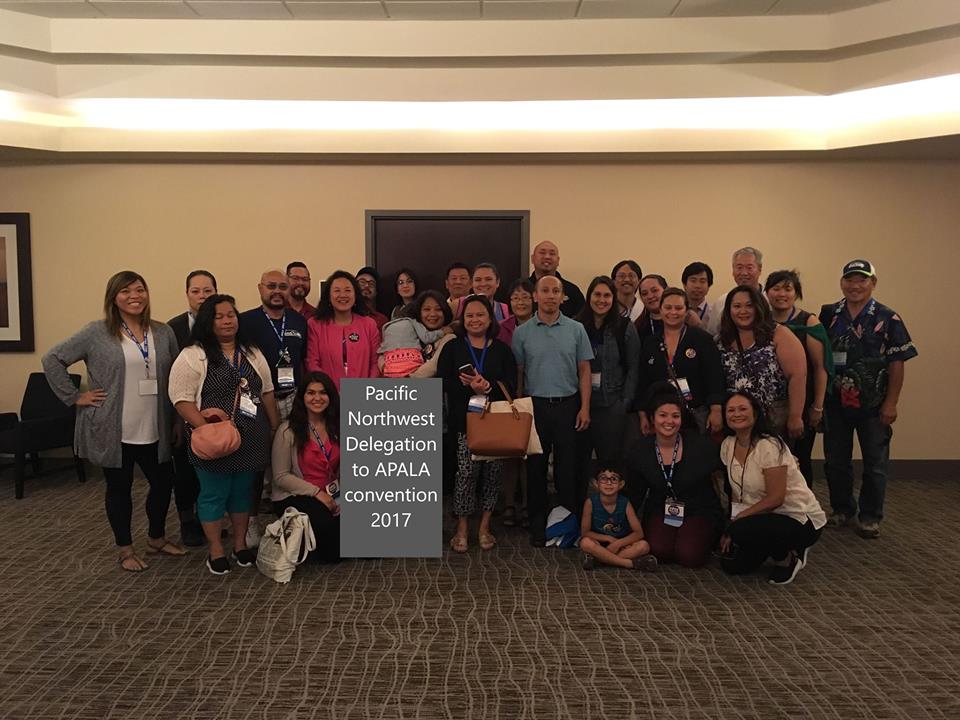 The Pacific Northwest delegation to the 14th Biennial Convention of the Asian Pacific American Labor Alliance (APALA) joined over 650 other Asian American and Pacific Islander trade unionists, labor leaders, and community partners in Anaheim, California from August 17-20, 2017. The convention theme, “25th Anniversary of Resistance—Organize and Fight” reflected the tenor of the delegates at the convention who pledged to go back to old fashion grassroots organizing to resist President Donald Trump and his administration’s racism, sexism, and homophobia and his anti-worker and anti-immigrant policies.

The 35-member Northwest delegation included representatives from a number of unions including Service Employee International Union locals and UNITE HERE Local 8, the hotel and restaurant workers union, both who have large numbers of Asian Americans.  Other locals represented from the Northwest were the American Federation of Teachers (AFT), AFSCME, International Association of Machinists (IAM) Districts 751-A and C and Boeing engineers with SPEEA, and the ironworkers and electrician unions.

APALA President Johanna Puno Hester opened the convention emphasizing the significance of where the conference was sited.  “Orange County (where Anaheim is located) is the epicenter of right wing attacks,” Hester said. As one of the highest ranking Filipino labor leaders in the United States, Hester recounted the right wing’s unsuccessful efforts to divide and destroy the powerful 100,000 member United Domestic Workers Union affiliated with AFSCME (American Federation of State and Municipal Employees), where she also serves as Special Assistant to the Executive Director. Despite the efforts of the conservative Freedom Foundation to divide the Vietnamese community from other minority groupings in their homecare union and taking away the union’s right to collect dues through paycheck deduction, the union remained united against the attacks. Doug Moore, Secretary Treasurer of UDW AFSCME 3930, stated that the union and its rank and file went door to door to the community and its workers and fought back and continues to grow in numbers.

In a show of solidarity in the fight against racism, APALA organized a demonstration at the convention in support for the people in Charlottesville, Virginia who are resisting the KKK and the neo-Nazis. Kent Wong, founding member of APALA and National Executive Board member, recalled that when APALA was founded 25 years ago, the Los Angeles riots, in response to the acquittal of the LA police officers in the Rodney King beating, were occurring. APALA also organized a solidarity action at that founding convention in solidarity with the people in Los Angeles in their anti-racism struggles, especially in support of the black community who had suffered historically from police brutality and the injustice of the criminal justice system.

APALA was founded in 1992 by six international unions including two who have large numbers of immigrant Filipino workers, Service Employees International Union (SEIU) and Hotel Employees and Restaurant Employees (HERE).  Rich Gurtiza, Regional Director of Seattle’s Alaska Cannery Workers’ Union, was one of APALA’s founding members. It is the first and only national organization of Asian American and Pacific Islander (AAPI) workers, most of who are union members, and who work with community partners to advance worker, immigrant, and civil rights.  Affiliated with the AFL-CIO, APALA’s mission is to address the workplace issues of the 660,000 Asian and Pacific Islander union members and serve as a bridge to their communities. Similar AFL-CIO organizations have been formed to serve the African American, Latino, and LGBTQ union members and their communities.

Seattle has had an APALA chapter for over two decades with connections with members in Olympia, Portland, Vancouver, and South King County.

APALA’s membership and leadership spans the diaspora of the AAPI community and was reflected in the hundreds that attended the 2017 convention, the panels and workshops presented and the issues that were taken up.

Because of APALA’s leadership training emphasis, it has become the training ground for many young people to enter the labor movement. In previous years, APALA has conducted Organizing Institutes to train new organizers for the labor movement.  This year, pre-convention activities included organizing and political training for hundreds of young workers and rank-and-file union activists. Likewise, younger labor leaders have brought a new perspective linking current day issues of the prison industrial complex and police brutality, climate change, and the difficulties of undocumented students and their families into the center of APALA and the broader labor movement.

The Fightback is On

Luisa Blue, Executive Vice President of SEIU, who got her beginnings as a Filipina nurse in San Francisco and organizing other fellow nurses four decades ago, took the podium to talk about labor’s plan to fight back against the current administration. “We need a long term plan,” Blue said. “We need to build a 21st century union and organize and mobilize in an unprecedented manner. We must work with the community to accomplish this.”

Lee Saunders, International President of AFSCME and the first African American AFSCME President, warned that “the Supreme Court, the right wing, and the present administration wants to make every state a right to work state and is targeting public sector jobs.”  The Janus vs. AFSCME case, which is certain to be heard in the conservative Supreme Court next year, seeks to “effectively eliminate unionized public sector jobs by taking away the union’s right to collect dues and making it voluntary.”  Saunders stated that in effect, this case is “an attack on the right to make a decent living and to retire in dignity.”

AFL-CIO Executive Vice President Tefere Gebre, the first AFL-CIO Ethiopian officer, talked about his history as a refugee coming to the United States by walking 93 days to the Sudanese border to find freedom and that his experience of risking everything to come here was shared by many other immigrants and refugees.  He called on convention delegates to “not abandon our spaces for the right wing to take them….” and that … “every day must be election day.”  Gebre and other keynote speakers railed on the importance of registering our communities to vote and to take back our country through political action and voting.

The Struggle Goes Beyond Borders

The convention was joined by a delegation of two dozen labor and peace activists from Okinawa and Japan who have been mobilizing against the proposed expansion of U.S. military bases on the island of Okinawa. The APALA convention unanimously adopted a resolution calling for the end to U.S. military base expansion on Okinawa. Other international guests were from Vietnam, Thailand, Malaysia, and the Maldives who shared the working conditions of people in their country and their efforts in fighting against corporate greed.

Eunice How, Seattle APALA Chapter President, stated that she “was also impressed by the many international guests APALA hosted.  My family is from Malaysia so I was especially excited to hear from the Malaysian brother Joseph Paul from the labor rights group Tenaganita.”

Three members of the Northwest delegation were elected to APALA’s National Executive Board. Jason Chan, President of IAM District 751-A, and Ligaya Domingo, Education Director at SEIU Healthcare 1199NW, will be serving their first terms. Jason Chan stated: “I am truly honored and humbled to be appointed to represent the International Association of Machinists and Aerospace Workers on the National Executive Board. For far too long, the AAPI community has not been heard regarding social justice and economic issues.  I look forward to having those conversations as well as building strength from within our AAPI membership.”

Tracy Lai, former Seattle Chapter President and instructor at Seattle Central College, was reelected National Secretary. “APALA’s 25th anniversary is important to me because APALA has grown when many other labor groups are shrinking. APALA is poised to give leadership that can unite community and workers movements. If we can maintain our organizing focus, APALA will certainly help give structure and support to the resistance emerging everywhere,” stated Lai. Furthermore, Lai stressed, “As a community college instructor, APALA keeps me informed of the most pressing issues in API communities.  APALA’s analysis guides me in my political work and how to connect my local, statewide and national efforts.”

Seattle APALA will be presenting a convention report back and a discussion on racism in the labor movement on Saturday, October 14 featuring Kent Wong, UCLA Labor Center Director. Kent Wong is also known for his outstanding work in defense of DACA (Deferred Action for Childhood Arrivals) students. For more information, contact Eunice How at [email protected]