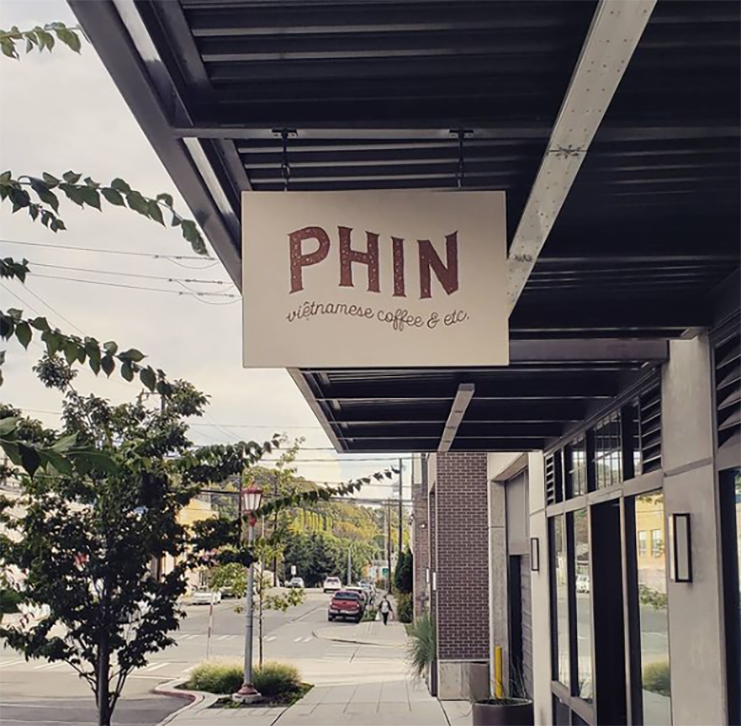 For Bao Nguyen, the aroma of Vietnamese coffee brewing in his brand new business, Phin Vietnamese Coffee & Etc, brings back memories of life in Vietnam, where he was born and raised.

“My parents had a small cafe when I was little,” said Nguyen. “That’s how I learned to make coffee the Vietnamese way, through this traditional brewing contraption called ‘Phin’. And that’s what we decided to name our coffee shop.”

Phin Vietnamse Coffee & Etc, the first anchored tenant in the new Thai Binh Building on South Jackson Street, is one of a handful of new businesses to open during the COVID-19 pandemic. A decision, Nguyen said was made easier by the fact he had signed the lease back in November.

“There’s relief in the fact the decision was already made months before this pandemic started,” said Nguyen. “The wheels were already turning. But yes, we were concerned and the anxiety was there, but the fire was already lit and there was no turning back.”

Phin wasn’t the only business to open in the Chinatown International District in the past year. Other eateries and cafes included Sichuan restaurant, Cheng Du Taste, along with Baegopa Korean BBQ and Taiwanese bubble tea chain, TP Tea.

“It’s very encouraging to see these new businesses opening in the CID despite all that’s working against them,” said Connie Au-Yeung, communications and marketing manager from the Chinatown International District Business Improvement Area (CIDBIA). “This year has been more difficult than ever for local businesses because of the consequences of the pandemic, from forced closures to safety regulations from local governments. But these CID business owners are tough and they have been getting the support they needed.”

Among the support is the CID Business Relief Team, a partnership between CIDBIA, Friends of Little Saigon, and Seattle Chinatown International District Preservation and Development Authority (SCIDpda). This effort to help direct financial assistance to CID restaurants and other small businesses has so far raised about $800,000. (The initial $100,000 seeded by Vulcan). The donations have been given out in three rounds so far, with the fourth round about to get underway.

“This money has definitely made a difference,” said Au-Yeung. “100 percent of the donations raised by the CID Business Relief Team has gone to help these small businesses, and we believe that’s why many of them survived, compared to those in other parts of the city. This is also why some new businesses are able to open up for the first time as well.”

Another new business that’s getting ready to welcome customers the first week of December is Sairen, a self-described lifestyle brand offering a mix of Japanese, Hawaiian and Seattle-made items. The store took over the space formerly occupied by Momo Boutique on the corner of 6th and Jackson which closed its doors after 13 years this past September when the owners retired.

“I used to work at Momo, and now my partner and I own this space. It’s kind of crazy,” said Kaitlin Uemura. Her partner, also named Kaitlin (Madriaga), said their focus is on clothing, home goods, and gifts by AAPI and POC designers. Uemera said she’d been planning on opening a store for a while and said doing so during a pandemic has its good days and bad days.

“On election night, we had one of our windows broken,” said Uemera. “We don’t believe we were targeted. But it was tough because we were about to open. But we started a GoFundme and we got enough money to afford a new glass window. It really shows people believe in what we are doing and are willing to help us. It gave us the motivation to continue and keep going.”

Nguyen of Phin Vietnamese Coffee & Etc said the support from the local community has also been what’s keeping him going. He said many of the customers came in because they want to support a new business, even if they know nothing about Vietnamese coffee. Nguyen said this kindness extends to his landlord, who has allowed him and his partner to operate rent-free for now.

“First it was to help out for the first six months because of the pandemic,” said Nguyen. “But the help just kept going and we are so grateful. We wouldn’t be here without them”.

The CID Business Relief Team is hoping to get the community to give back to local businesses as the holiday season approaches. Right now the first 150 people who give $150 or more will receive a special CID gift box in the mail with goodies from small businesses in the CID. The goal is to have overall donations in this fund reach one million dollars by the end of the year.

For Nguyen, he said right now he has more of a “three month” plan, than a “three year” plan. He and his girlfriend, who’s also his business partner, are focusing on the present and what they can do today to help keep customers coming back.

“For us, taking care of ourselves, physically and mentally is key,” said Nguyen. “There’s so many unknowns out there right now. We are just fortunate to have the support of friends, family, and local organizations. They say it takes a village to raise a child. We know it also takes a community to help small businesses stay in business.”